“IF IT’S NOT JUSTIFIED, THE COURT DOESN’T APPROVE IT” 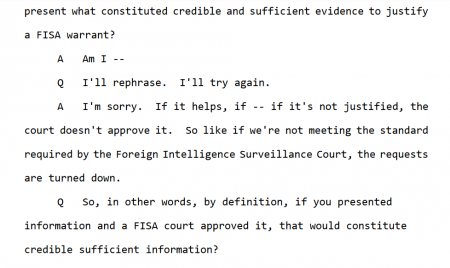 (Apr. 5, 2019) — Beginning on page 135 of a June 2018 closed-door interview with members of the House Judiciary Committee, then-FBI Assistant Director of Counterintelligence Edward William (Bill) Priestap deflected responsibility for granting surveillance warrants from the FBI to the Foreign Intelligence Surveillance Court (FISC) after first declining to answer whether or not the FBI used “unverified sources” to obtain its first FISA warrant on then-Trump campaign advisor Carter Page.

Priestap has since retired from the Bureau.

At the time, “Ms. Shen,” a questioner for the Democrats present for the transcribed interview, posed the question to Priestap by quoting from a May 2018 House Resolution which stated, in part: “Whereas in October 2016, the FBI and DOJ used politically biased, unverified sources to obtain warrants issued by the United States Foreign Intelligence Surveillance Court of Review (FISA Court) that aided in the surveillance of US citizens, including Carter Page.”

The “politically biased, unverified sources” are now known to have been the Russia “dossier” compiled by Christopher Steele, a British citizen then employed by the private opposition-research company Fusion GPS to gather derogatory information on Donald Trump, an effort funded by Hillary Clinton’s campaign and the DNC indirectly through law firm Perkins Coie.

The resolution called upon the attorney general to “appoint a Special Counsel to investigate misconduct at the Department of Justice and Federal Bureau of Investigation, including an investigation of abuse of the FISA warrant process, how and why the Hillary Clinton probe ended, and how and why the Donald Trump-Russia probe began.”

Previously in his interview, Priestap praised Strzok for his reputed counterintelligence capabilities while admitting that he assumed oversight of the Hillary Clinton private server investigation after Strzok was recruited to the effort.

Steele has since admitted under oath in a UK court case that he never vetted the information in the dossier, which was widely circulated within the U.S. intelligence community, the State Department, and some members of Congress in the months leading up to the 2016 presidential election.

In September 2016, Steele shared contents of the dossier with Yahoo! reporter Michael Isikoff, whose article was included with the dossier submitted to the FISA court as supporting evidence that Carter Page was improperly collaborating with the Russian government.

In a detail virtually unreported in the mainstream media, the congressmen co-sponsoring the resolution referred to “U.S. citizens” having become the objects of surveillance in 2016 rather than solely Carter Page.  The wording of the resolution runs parallel to claims made by another former Trump campaign advisor, George Papadopoulos, who claims that he, Page and two others were under formal FBI surveillance through the FISC in 2016 as a result of their involvement in the campaign.

Priestap’s initial response to Shen was, “I’m sorry, I’m just not at liberty to answer that.”

Priestap then denied knowing of any instances in which the FBI had used unvetted material to obtain surveillance warrants.  However, when Shen presented her question more generally, Priestap answered in the negative.

Pressing forward, Shen asked, “Are you aware of any instances with the FBI or DOJ did not present what constituted credible and sufficient evidence to justify a FISA warrant?” to which Priestap responded:

Shen then said, “So, in other words, by definition, if you presented information and a FISA court approved it, that would constitute credible sufficient information?”

“In my opinion, yes,” Priestap replied.

Through a Freedom of Information Act (FOIA) request and eventual lawsuit for non-response from the FBI and DOJ, the government-watchdog organization Judicial Watch obtained documentation last summer stating that the FISA court held no hearings before it granted the surveillance warrants on Carter Page on October 21, 2016. Three successive warrant applications on Page were approved, running through September 2017, well after Donald Trump took office.

Comey himself admitted after his firing in May 2017 that the dossier was unverified.

A number of observers and commentators have opined that not only the FBI, but also the FISC, should be held accountable for failing to vet the evidence in the Steele dossier which alleged that Carter Page was an agent of the Russian government.

Page was never charged with a crime, and, according to public interviews he has given, neither the FBI nor Justice Department has ever  asked to speak with him.  In an interview with “Full Measure” journalist Sharyl Atkinson last Sunday, Page said he has voluntarily provided intelligence information to the FBI over the years gleaned from his time as a military intelligence specialist and that after the Yahoo! article was published, he wrote a letter to Comey in an attempt to clear his name of the Russia “collusion” allegations made therein.

Isikoff, too, has said that the information he received from Steele remains unverified.

Former House Intelligence Committee Chairman Devin Nunes has said that he and a number of his colleagues are in the process of finalizing as many as “two dozen” criminal referrals to be sent to the DOJ involving individuals who testified as to their actions and knowledge in both the Hillary Clinton email investigation and the counterintelligence operation into the Trump campaign.

On March 22, it was announced that Special Counsel Robert Mueller had concluded his investigation into Russian interference in the 2016 election and found no evidence that anyone in the Trump campaign colluded with the Russian government. Mueller had inherited the investigation from the FBI after Comey was fired in May 2017.