“I’M NOT AT LIBERTY TO TALK ABOUT THAT ONE” 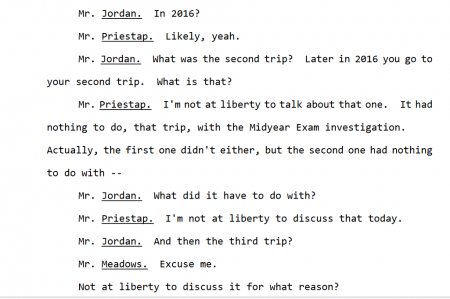 (Apr. 4, 2019) — As we reported early Thursday morning, a closed-door transcribed interview with former FBI Assistant Director of Counterintelligence Bill Priestap turned to the subject of the overseas travel of investigators who worked not only on the Hillary Clinton “Mid-Year Exam” private server probe, but also on the counterintelligence operation directed at the Trump campaign on the premise that someone was illegally collaborating with Russia.

In the interview last June, Priestap told congressional questioners and their representatives that he himself traveled overseas very infrequently and as rarely as possible for family reasons.

However, on page 84, he confirmed to Rep. Jim Jordan that he made three overseas trips in 2016, the first of which Priestap said was for the purpose of meeting with “a foreign government partner” (p. 79) consisting of more than one individual.

He declined to name those present on what he said was a full day of meetings until obtaining their approval.

When asked about the second trip, Priestap declined to provide any details at all.

Although the dates of Priestap’s overseas travel are redacted, Jordan nevertheless pressed forward to establish a timeline of the trips.  When Jordan asked Priestap when “the second one” took place, Priestap’s initial response was, “I don’t recall,” although he said it was “likely” to have occurred in 2016. Jordan then said declaratively that the second trip took place that year, with Priestap not objecting.

When Jordan markedly asked, “What is that?” in regard to the second trip, Priestap said, “I’m not at liberty to talk about that one” (p. 84). He affirmed, however, that “It had nothing to do with the Midyear Exam investigation.”

When Jordan asked if it related to “the Trump-Russia investigation,” Priestap repeated his declination to divulge anything further.

After both Rep. Mark Meadows and Jordan asked why Priestap could not divulge the purpose of the second trip, FBI General Counsel Dana Boente interjected with, “Because he has an active investigation, an active criminal investigation,” deferring to then-Special Counsel Robert Mueller.

Priestap also indicated that he was not “prepared” to discuss his overseas activity.

Former Trump campaign informal advisor George Papadopoulos has stated on many occasions over the last several months that the FBI dispatched a number of its own individuals as well as officials from the governments of the UK, Italy and Australia to infiltrate the campaign and that at least one “spy” was embedded within it.

In early 2016, Papadopoulos was based in London, where he was working in the energy industry.  In May, he had a meeting with then-Australian Ambassador to the UK Alexander Downer, reportedly at Downer’s request. Papadopoulos has said in a number of interviews that Downer began speaking about “dirt” the Trump campaign might possess on Democratic rival Hillary Clinton.

The previous month, Papadopoulos has said, he met with a Maltese professor, Joseph Mifsud at Mifsud’s request, where the academic proceeded to tell him that “the Russians” had “dirt” on Clinton in the form of thousands of the emails she said she deleted from her private, unauthorized server.

Papadopoulos said in his transcribed interview that he believes his conversation with Downer was recorded.  In December 2017, The New York Times reported that the conversation between Downer and Papadopoulos at the Kensington Wine Rooms, during which Papadopoulos allegedly brought up the subject of Clinton’s emails, was the catalyst for the FBI’s decision to open a probe into the Trump campaign.

Papadopoulos has said he has no recollection of mentioning “emails” to Downer during what he said was a “hostile” exchange.

Mueller inherited the FBI’s counterintelligence investigation into the Trump campaign, after which it morphed into a criminal investigation of Trump campaign associates for “process” or unrelated alleged crimes.  Mueller was also tasked with identifying independent Russian attempts to influence the 2016 election.

Over the last six weeks, Papadopoulos has said that a FISA warrant existed not only on Trump campaign adviser Carter Page, but also on himself, Lt. Gen. Michael Flynn, and short-time Trump campaign manager Paul Manafort, who is now in federal prison on convictions for tax evasion and other crimes unrelated to the campaign.  Papadopoulos has strongly suggested that 20+ pages of still-classified information from the applications submitted to surveille Page confirm that he and the two others were the subjects of formal surveillance warrants obtain by the FBI and DOJ through the Foreign Intelligence Surveillance Court (FISC).

The documentation submitted to the FISC is believed to have consisted solely, or relied upon heavily, an unverified “dossier” compiled by Briton Christopher Steele, who testified in a lawsuit in his home country that he could not vouch for the claims made within it.

Mueller’s probe officially concluded March 22.  Since U.S. Attorney General William Barr announced on March 24 that Mueller found no evidence of “collusion” between the Trump campaign and Russia, many have asked how and why the investigation was launched in the first place.

Since April of last year, former House Intelligence Committee Chairman Devin Nunes has said that the electronic communication (EC) shown to him at long last by the Justice Department and said to contain the justification for the FBI’s opening of its counterintelligence probe contained no such intelligence.

In an appearance Wednesday night on “Hannity,” Nunes said that House Republicans have prepared between “a dozen” and “two dozen” criminal referrals to be sent to the Justice Department alleging dishonest testimony by individuals involved in the Trump-Russia “collusion” investigation.

Former FBI Deputy Director Andrew McCabe, to whom Priestap reported, was referred for criminal investigation last year after the Justice Department’s inspector general determined that he lied about leaking to the media during four interviews.  Last month McCabe launched a book tour, during which he said that he believed it was “possible” that Donald Trump is an agent of the Russian government.

Former FBI Director James Comey’s actions during 2016 are said to be under scrutiny by the IG, with a report perhaps to be produced by early summer, according to John Solomon of The Hill and Sara A. Carter of saraacarter.com

During Nunes’s interview last night, Hannity predicted “a cascade” of documentation from the Mueller and FBI “Russia” investigations to be made public in the near future.