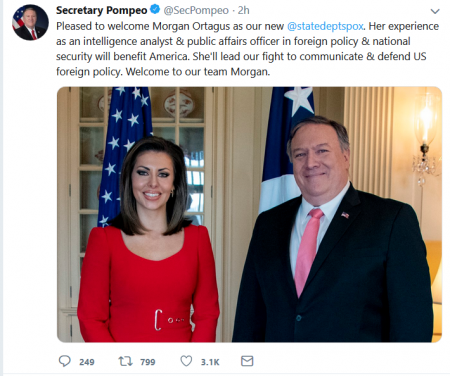 Ortegus, 36, has a background in diplomacy, national security, private enterprise, and financial services. Her previous government service includes intelligence analysis for the U.S. Treasury Department and a diplomat for USAID, while stationed in Iraq and Saudi Arabia.

An active member of the U.S. Naval Reserve, Ortagus has in the past been critical of Trump’s “temperament.” She supported Jeb Bush in the 2016 Republican primaries.

According to The Washington Examiner on March 28, Fox confirmed that Ortagus had left the network.

In a statement Wednesday, Secretary of State Mike Pompeo said:

I am pleased to welcome Morgan Ortagus as our new State Department Spokesperson. Morgan brings outstanding credentials and a record of public service to the position. She has worked her entire career in financial services, consulting, and diplomacy. She is an active U.S. Naval Reserve Officer, and was co-founder and Managing Director of GO Advisors, and a national security contributor at Fox News. Morgan also helped found EY’s Geostrategic Business Group, and she was a Global Relationship Manager at Standard Chartered Bank in the Public Sector Group covering clients in Africa, Asia, and the Middle East.

Previously, Morgan was an intelligence analyst at the Department of Treasury and began her government service at the U.S. Agency for International Development, where in 2007 she spent several months in Baghdad, Iraq. After serving in Iraq, she was assigned to Riyadh, Saudi Arabia, in 2010 as the Deputy U.S. Treasury Attache to the Kingdom.

Morgan will no doubt help the State Department fulfill its mission of promoting and defending the Administration’s foreign policy priorities for the American people and among the international community.

Nauert left her post after Trump nominated her to serve as United Nations ambassador following the departure in December of Nikki Haley.  Nauert withdrew her name from consideration in February, citing concerns for her family.  Trump then nominated her to serve on the J. William Fulbright Foreign Scholarship Board, a 12-member body within the State Department’s Bureau of Educational and Cultural Affairs.

The Board selects individuals it deems worthy to study in the U.S. or abroad under the banner of advancing research and enhancing international relationships.