Trump: “It Was Treason”

“A LOT OF BAD THINGS HAPPENED” 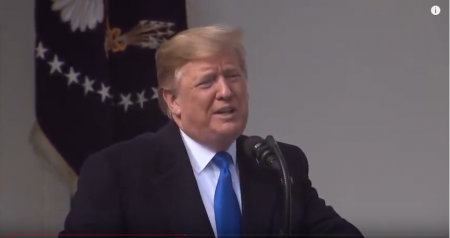 (Mar. 27, 2019) — In a telephone interview on Thursday night’s “Hannity,” President Donald Trump said that what was done to his administration in the form of the Russia collusion narrative should “never, ever happen to another president” and that those who perpetrated it over the last 2-3 years are guilty of “treason.”

Trump used the term while discussing the “insurance policy” mentioned in text messages between former FBI counsel Lisa Page and former FBI counterintelligence deputy assistant director Peter Strzok.  Trump explained the term as signifying the opening of the investigation into his campaign on the allegation that someone within his campaign “colluded” with Russian operatives to tip the election in Trump’s favor.

Beginning at 9:15 p.m. EDT, Trump expounded on the collusion investigation, assumed from the FBI by Special Counsel Robert Mueller, which consumed nearly two years of his presidency, beginning in May 2017.

On Friday night, Mueller delivered his report to Attorney General William Barr, who summarized it in a letter to congressional Judiciary Committee leaders Sunday, writing that no evidence of collusion was found and that Mueller came to no conclusion about whether or not Trump committed “obstruction of justice” in the course of the investigation.

At approximately 9:25, he pivoted to what he sees as his accomplishments in the areas of tax cuts, energy production, foreign relations, the economy and unemployment rate, as well as what he hopes will be a “good” relationship with Russia some day.

Trump characterized NBC and CNN as two of the “worst” media outlets in regard to his presidency.  For a number of years, Trump starred on NBC’s “The Apprentice,” likely earning the outlet millions and Trump himself a star on Hollywood’s Walk of Fame.

He accused House Intelligence Committee chairman Adam Schiff of “lying.”  “In one way, you could say it’s a crime what he did,” Trump said, calling out Schiff for claiming there was collusion “night after night” in televised interviews.

At 9:34, Hannity asked Trump if he still felt that Hillary Clinton should not be prosecuted for deleting 33,000 emails from her private, unauthorized server used while she was Obama’s secretary of state.  Trump said that on Election Night 2016, he was buoyed by his victory and felt the country should “think about the future.”  However, Thursday he said, “We can never allow these treasonous acts to happen to another president” and that perpetrators of the collusion conspiracy should face consequences.

The Clinton campaign paid for the “dossier” used to obtain FISA warrants on then-Trump campaign adviser Carter Page over a year.  Carter Page, who appeared on “Tucker Carlson Tonight” Thursday, was never charged with a crime and has legal action pending against the DNC for alleged defamation.

Trump said that if anyone on “his side” had leaked classified information as Clinton did, he or she “would be in jail.”

The end result is “no collusion and no obstruction, but it took a long time to get there,” Trump summarized.

Of the 20+ still-classified Page FISA warrant pages, Trump said (9:40 p.m.), he “has plans to declassify and release,” but that attorneys working for him advised him against it at the time.  He said they said if he had declassified them before the investigation ended, it could have been interpreted as “obstruction.”

At 9:42, Trump told Hannity that he believes Republicans will win back the majority in the House of Representatives.

At 9:58, Trump said that the Obama regime was informed in September 2016 of Russia’s impending attempt to interfere in the election and that he chose not to take action.  Trump described that decision as “major treason.”

6 Responses to "Trump: “It Was Treason”"