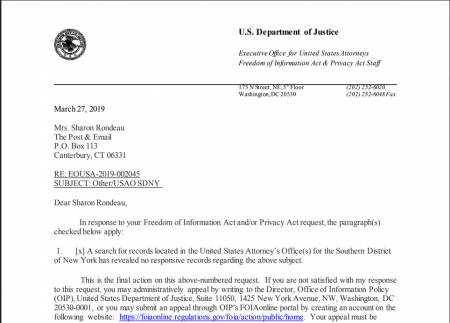 (Mar. 27, 2019) — On November 8, 2018, Rep. Jerrold Nadler (D-NY10), then ranking member of the House Judiciary Committee, published a press release in which he stated that Reps. Elijah Cummings and Adam Schiff, as well as Sen. Dianne Feinstein (D-CA) “sent letters to top Administration officials demanding the preservation of all documents and materials relevant to the work of the Office of the Special Counsel or the firing of Attorney General Jeff Sessions.”

Sessions, with whom Trump had long expressed dissatisfaction, submitted his resignation that day, reportedly at Trump’s request.

Nadler’s announcement was made the day after the midterm elections in which Democrats regained the majority in the U.S. House of Representatives.  Undoubtedly re-energized and re-elected, House Democrats, Nadler among them, renewed pledges made before the election to further investigate the president, his past business dealings and finances as CEO of the Trump Organization, and allegations of his campaign’s having “colluded” with Russian operatives to win the 2016 election.

On January 3, 2019, the 116th Congress was sworn in, after which Nadler assumed the chairmanship of the Judiciary Committee. Cummings became chairman of the House Oversight & Reform Committee, formerly the Oversight & Government Reform Committee; and Schiff assumed the chairmanship of the House Permanent Subcommittee on Intelligence (HPSCI) from Republican Devin Nunes.

In the press release, Nadler provided a one-paragraph quotation from the letters the four members of Congress sent to administration officials, which reads:

Committees of the United States Congress are conducting investigations parallel to those of the Special Counsel’s office, and preservation of records is critical to ensure that we are able to do our work without interference or delay. Committees will also be investigating Attorney General Sessions’ departure. We therefore ask that you immediately provide us with all orders, notices, and guidance regarding preservation of information related to these matters and investigations.

The excerpt was followed by a list of recipients with embedded links to each personalized communication, one of whom was a deputy U.S. attorney for the Southern District of New York (SDNY).

I am requesting all documents, including those in electronic format, dated between October 1, 2018 and March 6, 2019 exchanged among any official at the United States Attorney’s Office for the Southern District of New York and the following individuals: Rep. Elijah Cummings, Rep. Jerrold Nadler, Special Counsel Robert Mueller, and Rep. Adam Schiff.

Prior to submitting our request, we found an inactive link in regard to “FOIA”  and made two phone calls to ascertain the correct web location through which to send it.

Our request for expedited processing was denied several days later.  According to the FOIA law, federal agencies have 20 business days to provide a response.

On March 27, 2019, we received a one-page letter, signed by Kevin Krebs, the contact person on the OUSA website, stating that “A search for records located in the United States Attorney’s Office(s) for the Southern District of New York has revealed no responsive records regarding the above subject.” 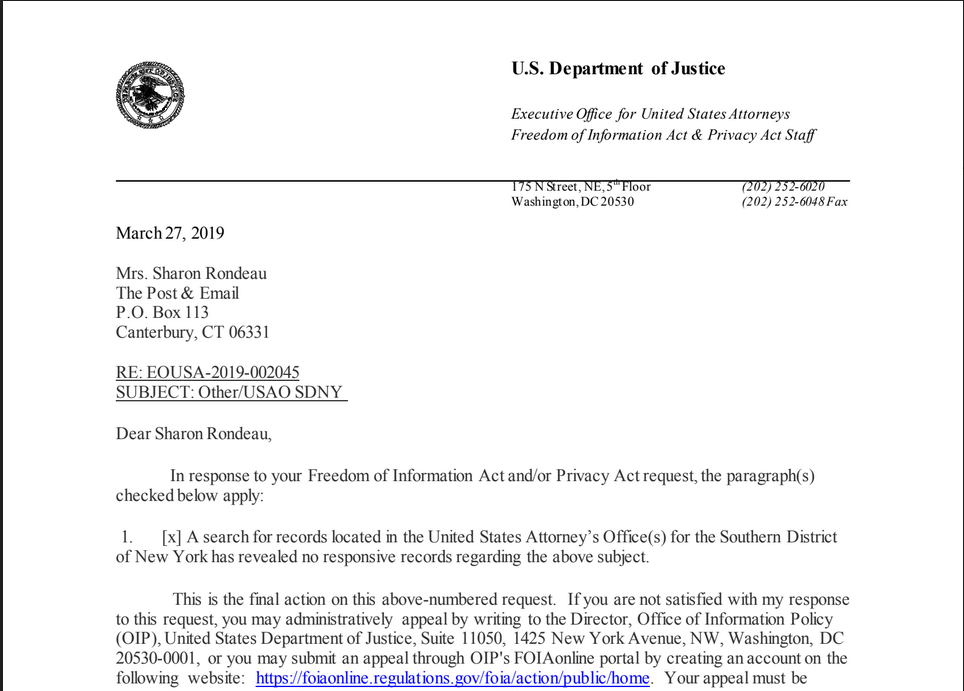 On Friday evening, it was announced that Special Counsel Robert Mueller delivered his report to U.S. Attorney General William Barr on his findings as to whether or not anyone in the Trump campaign collaborated with Russia to affect the outcome of the election and the extent to which Russian operatives attempted to influence U.S. elections that year. In a stunning outcome to many, Barr wrote in a summary on Sunday that Mueller found no evidence of collusion on the part of anyone associated with the campaign or Trump himself while elaborating on Russian attempts to conduct influence operations on the 2016 election.

Nadler and Schiff shortly thereafter stated that they want to see Mueller’s complete report and that they believe the president is nevertheless guilty of wrongdoing.

By statute, certain information underlying the findings, such as grand-jury testimony, must remain confidential.  According to public reports, Mueller interviewed 500 witnesses, issued 2800 subpoenas, requested documentation from a number of foreign governments, and issued 500 search warrants over the 22 months of his tenure as Special Counsel.

On Wednesday morning, Fox News reported that Barr expects to release more information from Mueller’s report within the next few weeks.

Some political observers opined, with some media contending, that while Mueller’s investigation has concluded, the SDNY is now the epicenter of continuing investigations into Trump, his family, finances, and associates.  “And so the focus of federal Trump investigations shifts north,” Bloomberg News wrote on Monday. “The prosecution team, known formally as the U.S. attorney’s office for the Southern District of New York and informally as SDNY, has already secured a guilty plea from Michael Cohen, Trump’s former personal lawyer, as part of a matter that was referred by Mueller’s office. SDNY is now pursuing several other probes of the president’s business and his inaugural committee. In his congressional testimony last month, Cohen said he was cooperating with the Manhattan prosecutors on matters he couldn’t discuss.”

Last summer, Cohen accepted a plea deal after the SDNY prosecuted him on a number of banking and tax crimes. Cohen also admitted to lying to Congress about the timing of a proposed Trump Tower in Moscow which never materialized.  During testimony to the House Judiciary Committee one month ago, Cohen claimed he could not answer certain questions because of the district’s ongoing investigations.

However, it has also been reported that Cohen does not have a “formal” cooperation agreement with the SDNY, and Cohen was almost immediately accused of lying to the committee on his pre-testimony disclosure regarding any “contracts” by which he is currently bound.

Several days before Cohen’s testimony last month, The New York Times reported, “Michael D. Cohen, President Trump’s former lawyer and fixer, met last month with federal prosecutors in Manhattan, offering information about possible irregularities within the president’s family business and about a donor to the inaugural committee, according to people familiar with the matter.”

Since Barr’s summary of Mueller’s work was made public, some have criticized the media for its continual drumbeat of “collusion” against Trump which they appeared to believe would lead to impeachment, criminal charges or both.  CNN CEO Jeff Zucker responded by stating that his on-air anchors are “journalists” and not “investigators” and that “our role is to report the facts as we know them, which is exactly what we did.”

With a staff of about 220 assistant U.S. attorneys, the U.S. Attorney’s Office for the Southern District of New York is one of the largest in the country. But that prosecutorial firepower isn’t the only reason why it has become among the most sought-after assignments for aspiring federal prosecutors.

The office, which handles some of the highest-profile cases in the country, has developed such an independent streak that within the Justice Department, it’s earned the nickname “the Sovereign District of New York.”

That’s why any mention of a witness cooperating with the office — as ex-Trump attorney Michael Cohen said publicly in testimony on Capitol Hill last month — should inspire fear in potential subjects of that assistance, former federal prosecutors say.

Even as speculation mounts that special counsel Robert Mueller might be winding down his investigation, a parallel threat to President Donald Trump only seems to be growing within his own Justice Department: the Southern District of New York.

Manhattan-based federal prosecutors can challenge Trump in ways Mueller can’t. They have jurisdiction over the president’s political operation and businesses — subjects that aren’t protected by executive privilege, a tool Trump is considering invoking to block portions of Mueller’s report. From a PR perspective, Trump has been unable to run the same playbook on SDNY that he’s used to erode conservatives’ faith in Mueller, the former George W. Bush-appointed FBI director. Legal circles are also buzzing over whether SDNY might buck DOJ guidance and seek to indict a sitting president.

On March 1, former New York City Mayor and former U.S. Attorney for the Southern District of New York Rudy Giuliani, who began representing Trump last year with regard to the Mueller investigation, told Brian Kilmeade on Fox News Radio that he “believes Michael Cohen perjured himself to Congress” and that he is not “worried about the Southern District of New York’s investigation into the President.”