“BEATEN TO DEATH IN HIS CELL” 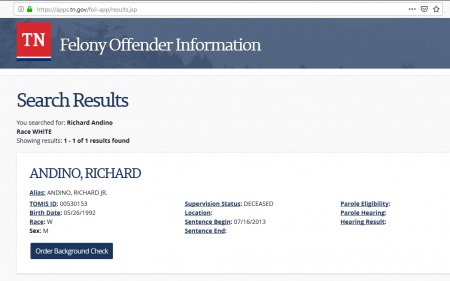 (Mar. 24, 2019) — An inmate housed at the Northwest Correctional Complex (NWCX) in TiptonVille, TN was found deceased in his cell sometime before March 7, a Pennsylvania newspaper reported on Saturday.

The article was published the same day on which The Post & Email reported a lawsuit in which 24-year state prisoner Omowale A. Shabazz described the institution as “the most dangerous prison he has been at in the entire twenty plus years of his incarceration.”

In what appears to be a front-page article in The Bloomsburg, PA Press Enterprise Saturday, the paper reported that the inmate who died was from the area, specifically the town of Mainville.  Both Bloomsburg and Mainville are located in east-central Pennsylvania in Columbia County.

The Post & Email received legible electronic images of the article on Sunday morning from a reader but has chosen not to publish them in order to respect the newspaper’s copyright and because we are not a subscriber. The article is listed at the paper’s online portal under the title, “Inmate’s kin seeking answers,” with the subtitle, “Ex-Mainville man died in Tennessee prison, sister says,” both of which are identical to that which appears in the hard-copy newspaper.

The first paragraph of the article states that, “A former Mainville man’s mysterious death in a Tennessee prison has family members desperately trying to pry answers out of what they call a ‘hush-hush’ state system.”

Richard Andino Jr., 26, was reportedly “beaten to death in his cell,” according to the article.

Six days prior, Tennessee Gov. Bill Lee reportedly visited the institution, located in the state’s northwest corner, “to speak with staff and tour the vocational programs offered for incarcerated individuals,” according to a press release at the TDOC’s website.

Governor Lee kicked off his visit with an inspirational address to the staff detailing his vision for criminal justice and successful reentry and their role in bringing that vision to life. Governor Lee shared with the group, “We have heard about this place and all the good things you are doing, which are some of the things we want to do across the state. Especially what you are doing in the educational programs which makes re-entry easier.” Lee later added, “What you are doing here sets an example and I wanted to come see it. I am proud of the work you do.” The Governor later toured the vocational welding and automotive classes and spoke to offenders enrolled in the program.

According to Commissioner Parker, “I’m proud of the work we do here. Whatever the job is, it takes all of us to make our mission happen. Today’s visit from the Governor means so much to the staff and inmates here. I see the great work the men and women of this department do every day.”

Andino’s death does not appear to have been reported at the TDOC’s website nor in Tennessee media. 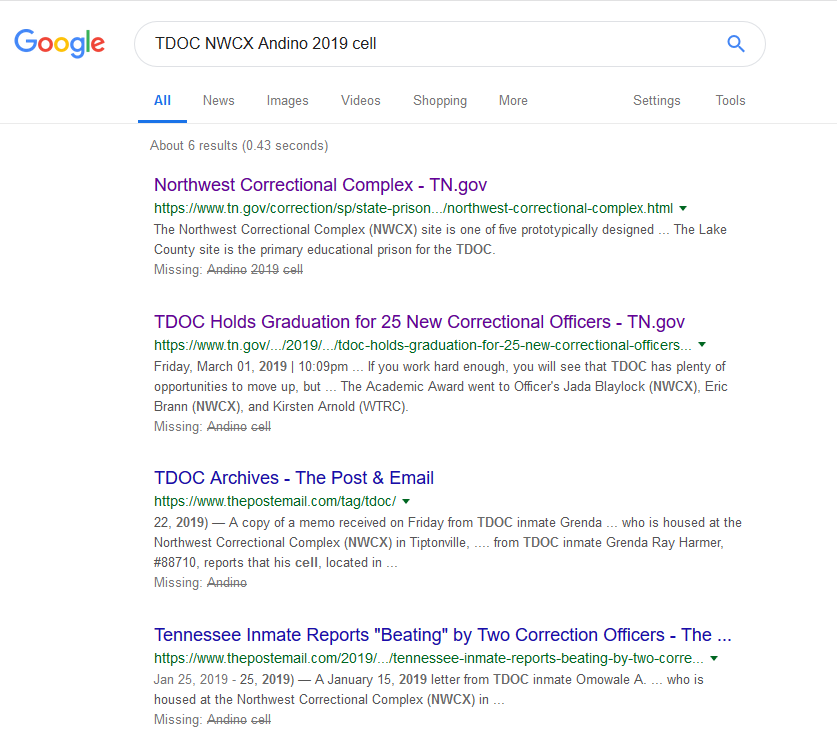 The reporter, Julye Wemple, obtained the information about Andino from his sister, Joanie, who said that the scant information she has received from the Tennessee Department of Correction (TDOC) does not “add up.”  Wemple reported that her repeated calls to the prison were not returned.

Joanie was reportedly told by TDOC Communications Director Neysa Taylor that an “inquiry” into her brother’s death was conducted on “March 7,” but that its results are not yet available because of “an ongoing investigation.”

Andino had moved to Tennessee in 2013 and was serving a four-year sentence for a conviction on a probation violation, the paper reported.  He was first jailed in Williamson County, according to the report, and relocated to NWCX “last month.”  “And that was done without any warning or notice to his family,” Wemple wrote.

The article states that Joanie related she was first contacted through Facebook by one of her brother’s friends, who reported that Andino was “sick.” Shortly thereafter, the article relates, Joanie called the prison and within “an hour” received a call from the prison chaplain stating “her brother was dead.”

The article is presented in a number of subsections, the last of which is captioned, “Troubled prison.” The segment relates the 2015 gang violence which sent eight inmates to the hospital, an incident The Post & Email included in its report on Saturday and about which we wrote previously on a number of occasions. In her piece, Wemple referred to an AP report on the gang uprising.

The final paragraph of the article reads, “Just before he died, Andino had complained to his parents about the guards, saying they were banging inmates’ heads off walls and throwing people ‘in the hole for no reason,'” mirroring some of the claims made in Shabazz’s lawsuit filed last month.