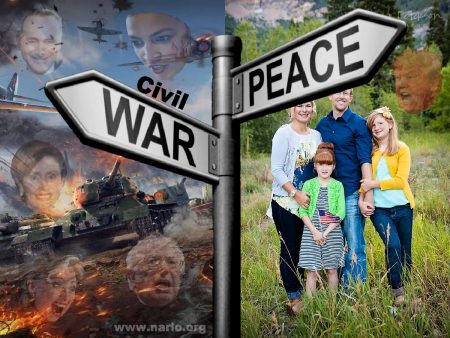 (Mar. 17, 2019) — “Here I stand on the brink of war again, a citizen of no place, no time, no country but my own . . . and that a land lapped by no sea but blood, bordered only by the outlines of a face long-loved.” — Diana Gabaldon, contemporary author – Outlander Series

Not very often in America’s history have the two sides been so far apart and growing farther apart with each passing day.  Backs are arching, anger is rising and the hair is standing up on the back of our collective necks.    America is seething, the rhetoric is growing more coarse, the temperature is increasing, the pot is boiling and the acrid smell of war is in the air …… again!  Numerous credible pundits are predicting civil war in America.  Even the Great One, Mark Levin, is hinting at the possibility of civil war in a one-half-hour broadcast.   He does not do so lightly.

A man giving recent testimony before Congress about gun control legislation is also suggesting the possibility of civil war:  https://www.youtube.com/watch?v=QpRQhd3TGX0 He says he’s tired of the double-dealing, the lying, the cover-up, the corruption, the cronyism, the usurpation of our unalienable rights and the trashing of our Constitution.  This man speaks for millions of Americans.

But the coming war is not a war between nations fighting over geography, resources, territories, or religion.  It is a war of opposing ideologies and which ideology will hold political power within our own nation.   We have been here before but we have always stepped back from the brink, with one horrific exception in 1861.  The question is, can we step back this time?

The scars of war live in many of us today.  Still alive are fewer and fewer members of the “greatest generation.”  Even today, those who have memories of that war well up into tears as they relive the horrors that torment their minds from a war fought some 75 years ago.  Those who fought in the Korean and Vietnam Wars remember the lost lives of buddies and the death and destruction.  Vietnam veterans remember being spit on when they came home.  And now we must fight wars in strange foreign lands against an ideology that knows no nation but lives on pure hatred for every other human on earth who doesn’t believe in radical Islam.

Most combat soldiers are changed forever from the events of war.  Many never live a normal life thereafter.  Inside their minds a silent war rages as they drift between memories of the insanity and bloody carnage of war and the alleged sanity of a normal life in peace.  Many lose the battle and end up in divorce, engage in crime, or become homeless.  Such is the ugly face of war and it should be avoided at all costs, unless we find ourselves one day “….. fighting when there is no hope of victory, because it is better to perish than to live as slaves.” (Churchill)

What separates us is fundamental and irreconcilable.  The gap between liberals and conservatives today is as wide as the gap between the Israelis and the Palestinians, a gap that may never be closed.  As a nation, a people and a culture, we have a choice between the principles of liberty or raw, unchecked, top-down political power.  Compromise between the two sides is a dead end game that will eventually lead to war.   There can be no compromise between freedom and slavery and the Progressive-socialism-globalism being seriously proposed by the left as a path for the future is abject slavery.  Their “Green New Deal” (GND) is the brainchild of the criminally insane.  Medicare-for-all is just a subset of the GND, hatched by idiots whose ONLY mission is absolute power by collecting a majority of votes from the ignorant, brainwashed masses looking for “free” stuff.

As a nation and as a people, we must choose between the unalienable rights of the people and limited powers of those who govern us, as codified into law by the U.S. Constitution, or we may be forced to choose government and the ruling class holding all of the power.  Should we choose the latter, a significant portion of the country will be forced to go to war to preserve liberty, and that portion owns most of the guns.  But war is not the answer.  It will only lead to chaos, anarchy, death, and possibly even a dictatorship.

The young ones (millennials) who now embrace socialism have been molded that way by our public and higher education systems and the constant din of progressive messages that permeate business, the family, the airways, social media and sometimes the church pulpit.  By design, Progressivism has slowly infiltrated all of our institutions over the last 100 years like a Trojan horse, and there is hardly a person alive today who has not been infected in some way by the Progressive virus.

But those over 65 are wise to the deception.  They have the wisdom of age, logic, intellect and history to see through the veil of deceit offered up by the con game that is Progressivism, socialism, globalism and man-caused global warming.  Sadly, those over 65 don’t have the strength anymore to take on the battle that looms ever more present in our future.  In the past, any battle is passed on to the young ones who possess the energy, courage and drive to prosecute a war.  But those very same young ones today see no reason to go to war and in fact are fully supportive of the Progressive-socialist government framework that consists of “free” everything without regard to those who must pay for the “free” everything.

Is there an answer to this dilemma of generational Progressive brainwashing?  How can we avoid war when we are so far apart?  One side wants to strip us of our freedom and the other side has no intention of capitulating.  War, being politics by other means, could be the final arbiter.

When winning seems impossible, the smart generals look for the Achilles heel of their enemy and the other side has several Achilles heels.  They don’t and won’t play by the rules because their only goal is absolute power by any means, in the absence of principle or the law.  Progressivism and socialism lead to elitism, arrogance, cronyism and corruption, and the elitism, arrogance, cronyism and corruption on the Progressive side is legendary.  They are arrogant because they think that their way is the only way.  They have become corrupt because the people have allowed them to get away with it.  There is no compromising with them and if the truth be known, we have been compromising with them for far too long.

Knowing that a shooting war is the last viable alternative, how do we defeat them?  There is one way and that is to expose their arrogance, cronyism and corruption, local, state and federal, on a grand scale.  As exposure grows and grows, those supporting the other side will find themselves in a quandary.  Do they support power for power’s sake, or will they finally support constitutional principles and decide that freedom is better than slavery?

But, you say, how do we go about exposing their arrogance, cronyism and corruption?  You do it by investigating one judge, politician and bureaucrat at a time with citizen investigating teams from every city, county and state in America.  We don’t have to go to war.  We just have to investigate and expose.

Out of our large reading audience it is very likely that one or more of you know of a politician, judge, or bureaucrat who you think (or know) is corrupt.  Who knows, maybe all of them are corrupt.  It turns out that the longer the judge, politician, or bureaucrat has been in office, the greater the likelihood he or she will become corrupt.

From mostly the privacy of your own home with a computer and an Internet connection, you can investigate a politician, judge, or bureaucrat for malfeasance, misfeasance, corruption, crimes, infidelity, or violation of Oath of Office and then expose them to the general public.  Nothing roots out corruption faster than a highly-focused beam of sunlight of truth.

We’ll show you how to do it by using your own computer, the Internet and some investigating techniques.  We have developed a method to verify the evidence of wrongdoing, provide affidavits to declare the evidence in writing and conduits to the best places to supply that evidence that does the most good.  We provide sample freedom of information act requests and other documents to obtain harder-to-find evidence.

We don’t need 10,000,000 citizen patriots to do the job.  Can you imagine the havoc we could unleash if we just had 10,000 or more citizen investigators, digging deep into every Democrat judge, politician, or bureaucrat?

Yes, there are probably just as many corrupt Republican politicians as there are Democrat politicians and each would be fair game for investigation.  Freedom cannot co-exist in the toxic soup of corruption.  Corruption, cronyism, the lack of integrity, honor and honesty are the killers of a Constitutional Republic.  If liberty is to survive, corruption must be significantly diminished or eliminated.  The only way to eliminate it is to expose it, and the other side will be shaking in their boots knowing that thousands of American citizens are “coming for them” ….. legally!

Young, middle-aged, or old, this is something just about everyone can do without exerting a lot of effort or spending a lot of money.  All you need is a desire to research and find that one piece of evidence that will drum a politician, judge, or bureaucrat out of office in disgrace or refer him or her for criminal prosecution.  And there is a bonus!  If the person you investigate is ousted, resigns, is impeached, or is recalled as a result of your incriminating investigative efforts, you could be entitled to a significant monetary award.  To learn more click HERE.

What have you got to lose?  Just your freedom if you let the other side win!

Americans have three choices.  1) Openly capitulate to the Progressives, 2) do nothing, which is the same as capitulating, or 3) fight back.

If the Democrats take full control again, taxes and regulations will rise dramatically, highly restrictive gun control legislation will be passed, hundreds of thousands of jobs could be lost and they will no doubt pass their Green New Deal and Medicare-for-all, just as they passed ObamaCare.  If they do take control, America will become just another third-world, bankrupt, socialist banana republic, and war will be inevitable.

8 Responses to "If You Let Them Win, War Is Inevitable"