Transcript: Lisa Page Traveled Outside of the U.S., but the FBI Won’t Say Where or When 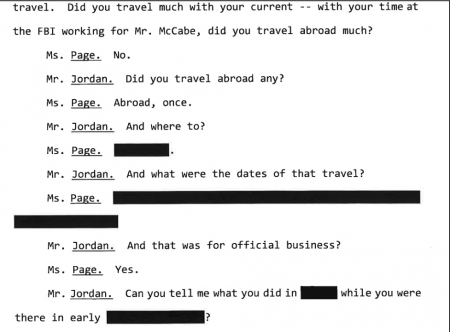 (Mar. 14, 2019) — In Part 1 of two transcripts released earlier this week by House Judiciary Committee ranking member Doug Collins (R-GA9), the ranking member of the House Oversight & Reform Committee, Jim Jordan (R-OH4) asked former FBI Counsel Lisa Page if she had ever traveled outside of the United States on official business.

Page was questioned for two days last summer, July 13 and July 16, behind closed doors by members of the two committees about what she knew of the two investigations the FBI conducted on the two 2016 major-party presidential candidates.

Part 1 of the transcript, consisting of 165 pages, is from Page’s July 13 session, which inevitably invoked her actions and those of former FBI Counterintelligence deputy chief Peter Strzok.

The investigation into Democrat candidate Hillary Clinton’s use of a private email server when she served as Obama Secretary of State, known as “Mid-Year Exam,” concluded in early July 2016. Several weeks later, a counterintelligence operation dubbed “Crossfire Hurricane” was opened into the Trump campaign based on as-yet-unconfirmed evidence that someone within the campaign was collaborating with Russians to affect the outcome of the election.

Page and Strzok became involved in a romantic relationship, Page admitted in her closed-door testimony, and an Inspector General’s investigation into the conduct of the FBI and Justice Department in 2016 and 2017 revealed thousands of text messages the two exchanged expressing an obvious dislike of Trump and the prospect that he could become president.

Strzok was then removed from the Special Counsel’s investigation, which emanated from the work the FBI had done on Crossfire to the point that the agency’s director, James Comey, was fired on May 9, 2017.

In July 2016, Page was working exclusively for then-FBI Deputy Director Andrew McCabe.  Within the transcript, Page, 38, said she previously worked at the Justice Department as a prosecutor for six years, where also-deposed DOJ official Bruce Ohr was her supervisor.

Ohr’s wife Nellie worked as a researcher for the private company Fusion GPS, which was contracted by Clinton’s campaign to assemble “dirt” on Trump. The derogatory information came in the form of a “dossier,” at least parts of which were provided to Bruce Ohr by former British intelligence agent Christopher Steele. Steele, considered an authority on Russian threats, was employed by Fusion GPS to purportedly tap his sources for information about Trump.

On January 10, 2017, the contents of the dossier were published by Buzzfeed News, ten days before Trump was to be inaugurated.

In a transcript of Bruce Ohr’s testimony to the two congressional committees last summer and released by Collins last week, Ohr stated that he and his wife met with Steele at least once for breakfast in 2016 and that he continued to meet with Steele and pass on “information” he acquired from Steele regarding Donald Trump to a contact at the FBI even after Steele was terminated by the agency for broken his confidentiality agreement.

Ohr additionally testified that he cautioned his associates that the information was “source information” and not necessarily fully vetted.

Page’s response to Jordan’s first question about overseas travel was, “Abroad, once” (p. 123).

Jordan then asked, “And where to?” to which Page responded, but her answer is redacted.

“And what were the dates of that travel?” Jordan continued; Page’s response is again blacked out.

Jordan then confirmed with Page that her travel was “for official business.”

Jordan replied with, “Pardon?” to which Page responded with, “I can’t — on advice of FBI counsel, I can’t go into that detail.”

On page 124, Page told Jordan that the trip included Strzok and three other FBI personnel in addition to herself. She said that according to FBI policy, the three fell within a certain rank in the agency and could therefore not be identified.

A day earlier, Strzok had testified to the committees publicly.  Strzok was fired in August, while Page resigned her post in May.  In their respective testimonies, both claimed their actions in the Clinton and Trump investigations were taken without political bias.

Transcript: Lisa Page Traveled Outside of the U.S., but the FBI Won’t Say Where or When added on Thursday, March 14, 2019

One Response to "Transcript: Lisa Page Traveled Outside of the U.S., but the FBI Won’t Say Where or When"