(Mar. 12, 2019) — On Monday the government-transparency organization, OpentheBooks.com, reported that in the last month of fiscal year 2018, September, government agencies spent a combined total of $97 billion originating with hard-working Americans.

The government’s fiscal year begins on October 1 and ends on September 30 of the following year.

According to the report, expenditures included office furniture, exercise equipment, travel, golf cars, “household furnishings,” ammunition, musical instruments, dinner china, and electronic devices, among others.  One of the “household” items was a “Wexford leather club chair” with a price tag of more than $9,000, the report says.

The report is titled, “The Federal Government’s Use-It-or-Lose-It Spending Spree” and is available at no charge here or here:  use-it-or-lose-it-report

OpentheBooks is an endeavor of American Transparency, a 501(c)(3) organization, with a mission statement of, “Every Dime. Online. In Real Time.”   Its findings regarding government spending have been featured on ABC News, C-Span and Fox News.

The prologue of the 33-page report begins: 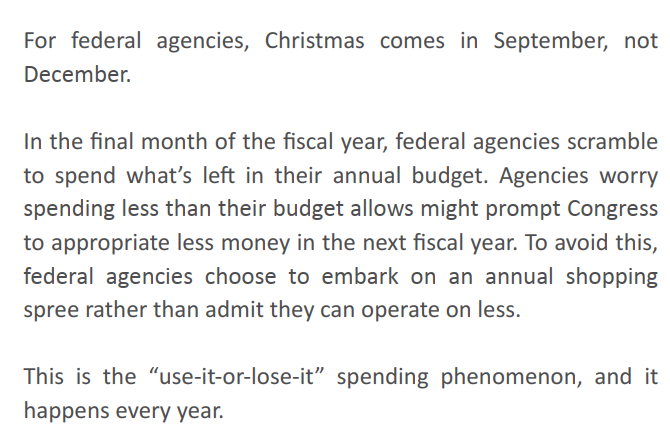 The Department of Homeland Security (DHS) and State Department were in fourth and fifth place in spending, the report states.

Of the $97 billion total for September 2018, the report found that $53.3 billion was spent in the final week of the month.

At the beginning of FY 2019, President Trump asked all of his cabinet members to cut their budgets by 5%.  “I think you’ll be able to do it,” he reportedly said following an October 17, 2018 cabinet meeting.

“Any cuts proposed by agencies would be put into Trump’s fiscal year 2020 budget, and administration officials maintained that Trump wants the reductions included.,” The Washington Examiner reported on October 20.