WHY RELY ON SECOND- OR THIRD-HAND INFORMATION? 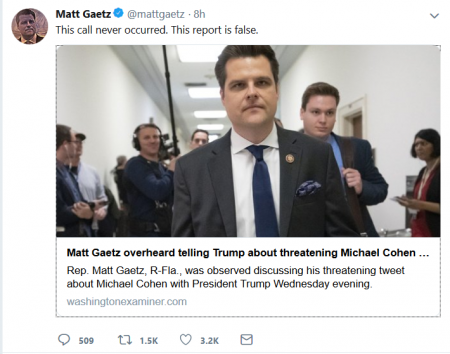 (Mar. 1, 2019) — Rep. Matt Gaetz (R-FL1) late Thursday night refuted an article published at The Examiner alleging that he consulted with President Trump when he was in Hanoi this week about posting a tweet about some of Michael Cohen’s family members and relationships.

Some believed that Gaetz, 36, “threatened” Cohen Tuesday with the tweet, which he later removed, and intended to intimidate Cohen prior to Wednesday’s hearing with the House Oversight & Reform Committee.

“This call never occurred. This report is false,” Gaetz tweeted, referring to The Examiner‘s report, which is titled, “Matt Gaetz overheard telling Trump about threatening Michael Cohen tweet: ‘I was happy to do it for you.'”

The article was written by Daniel Chaitin, The Examiner‘s “Breaking News Editor,” and relies on tweets issued by Edward-Isaac Dovere of The Atlantic.

As of this writing, Dovere has not published an article about Gaetz; rather, his writing has recently focused entirely on 2020 Democratic presidential hopefuls.

On Twitter Thursday morning, Dovere reported Gaetz initially responded to Dovere’s claim about the phone call with, “I don’t do read outs on my convos w POTUS.”

The Examiner article was published Thursday and reportedly updated Friday at 12:29 a.m.

In Dovere’s Twitter feed of February 28, 2019, a Vox reporter, Alex Ward, is noted to have claimed a text exchange with Gaetz about the alleged conversation with Trump in which Gaetz reportedly said he was speaking with someone other than the president at the time in question.

Ward presented on Twitter what he said was the text-message exchange with Gaetz in which Gaetz reportedly called the story “hilariously false” and not about his tweet.

Neither Dovere nor Ward identified a source of the alleged phone call between Gaetz and Trump.

Earlier on Thursday, Gaetz tweeted, “Waiting for @IsaacDovere to either provide proof or correct his earlier false reporting like” with a GIF of a wrestler frequently looking down at his wrist, perhaps suggesting he was anxiously awaiting something.

On Wednesday, Gaetz said he deleted the questionable tweet and “personally apologized” to Cohen for mentioning family members “in the public square.”  On Tuesday evening, Speaker of the House Nancy Pelosi issued a statement which, although not mentioning Gaetz by name, said that “comments made on social media or in the press can adversely affect the ability of House Committees to obtain the truthful and complete information necessary to fulfill their duties.” 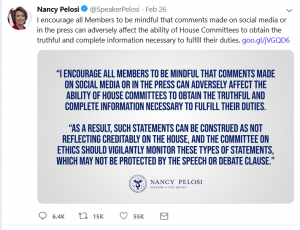 A scathing editorial published at The Miami Herald with a “news” label, according to the article’s url, states that “Edward-Isaac Dovere, a staff writer for The Atlantic, said he heard Gaetz take a call from Trump about the Cohen tweet. The president was calling from Hanoi, where he was negotiating a deal with Kim Jong Un that went south.”

Dovere did not say he overheard the call and may have obtained his information from Ward.

At 10:38 a.m. EST, we left a voice message for the article’s author, Fabiola Santiago, to ask why her column is not labeled as an editorial rather than a “news” article.  We left our telephone number and email address.

At 11:11 a.m. EST, we contacted Gaetz’s Washington, DC office by telephone, leaving a message with our media contact information.  As of press time, we have not received a response from either Fabiola or Gaetz’s office.

On Thursday, former CBS journalist Lara Logan appeared on “Fox & Friends” to comment on a number of topics. As to the media’s coverage of Cohen’s testimony and “Russia” coverage in general, Logan said that Americans with whom she has recently spoken “don’t watch anymore” because of perceived Russia saturation coverage.

She opined that the media has not reported the current situations in Syria, Iraq and other places in the world in which the U.S. has been involved and in which she believes Americans are interested.

Co-host Steve Doocy then referenced a podcast for which Logan was interviewed in which she reportedly said that most journalists are “progressive.”  A still photograph from the podcast, which was done in person with a former Navy SEAL, was shown for part of Logan’s Thursday in-person Fox & Friends interview.

“It doesn’t mean if you’re a Democrat, or you’re on the left, that you can’t be a professional journalist,” Logan continued.  “I’m not saying that there aren’t any good journalists on the left, that everyone is a political operative.  I’m saying there’s too much politics, there are too many political operatives, and too much political discourse that’s infiltrated the process for journalism. Look at the language; it’s so pejorative, right?  I mean, whatever happened to reporting the facts?”