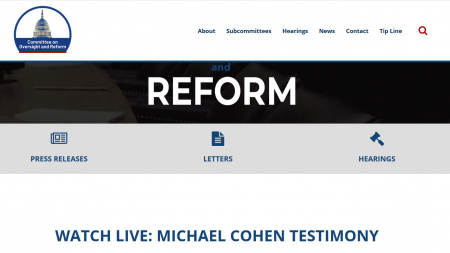 Cummings said he wanted to proceed with the hearing, but Meadows insisted on a “recorded” vote, necessitating a roll call by the secretary on whether or not to “table” the motion.

The vote was 24 affirmatives and 17 negatives.  Cummings then said that it appeared to him that some do not wish Cohen to testify publicly.  Ranking member Jim Jordan (R-OH) then said that he and his colleagues simply “want to follow the rules.”

Cohen is set to testify as Trump is attending a summit in Hanoi, Vietnam with North Korean dictator Kim Jong-Un, the second of its kind, in an effort to convince the reclusive leader to denuclearize and develop a market economy, perhaps over a number of years.

Last August, Cohen accepted a plea deal in which he admitted guilt in eight federal crimes associated with his private businesses, although he also said he made payments to women on Trump’s behalf which violated campaign-finance laws.  Cohen also admitted to lying to Congress while testifying in the “Russia collusion” investigation led by Special Counsel Robert Mueller.

Cohen will begin a three-year prison term on May 6, delayed two months due to surgery he recently underwent.

Cummings reiterated that questions regarding the “Russia” investigation should be avoided.

Following Cummings’s opening statement, Jordan gave a fiery one of his own, claiming that Cohen’s attorney, long-term Clinton operative Lanny Davis, “orchestrated” the hearing in an attempt to remove Trump from office.

Jordan criticized Cummings for limiting the scope of the hearing and for inviting a convicted felon to testify to the committee.  He claimed that Cummings wants to ask Cohen only about subjects which will be damaging to Trump.

Cohen claims that the White House has “threatened” him in an attempt to discourage him from testifying.

At 10:25 a.m. EST, Cohen read an opening statement circulated to the media in advance, during which he apologized for having worked for Trump and participated in his 2016 presidential campaign.  He claimed he was “mesmerized” by Trump and therefore took actions which were wrong.

“It monopolized my life,” Cohen said of his work for Trump over approximately a dozen years.

On Tuesday, it was announced that Cohen was disbarred.

As Cohen was testifying, Trump tweeted: