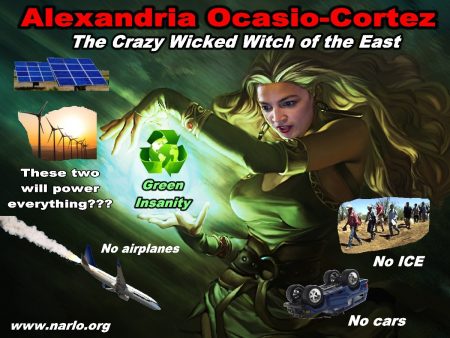 God knows how anyone can watch the news any more.  Each day one or more crazy things happen that defy logic, intellect and common sense.  For example, why are 70,000 people a year dying of a drug overdose?  That doesn’t include the hundreds of thousands (or is it millions?) that are “hooked” on drugs.  Remember, there would be no drugs crossing our southern border if millions of stupid Americans weren’t consuming the drugs!!!

Why is every 2020 Democrat candidate for president coming out with socialist policies that would play well in Communist China, but hardly in the United States of America?  Where were these people born?  There is no way they could have been sired by American parents.  Or, has Progressive brainwashing been so successful that socialism is now in the mainstream?

Why do we let millions of illegal aliens cross our borders and not do everything in our power to stop it, even if that means building fences across the 2,000 plus miles from San Diego to Brownsville?  We are the only nation on earth that does not adequately protect its borders.  But worse, we are a nation that provides huge incentives for every person in the Western Hemisphere to break down our doors and then demand we pay for them when they enter illegally.  Why do legal Americans put up with it?  They should fire every politician who supports open borders and refuses to fund the necessary defenses.

Why do we let local, county and state politicians pass sanctuary policies for illegal aliens, thus allowing the illegal criminals to rob, scam, run us down with their cars and kill us?

Why do we give these illegal aliens drivers’ licenses and allow them to register to vote, when it is illegal for them to vote?

Why in the he** did we-the-people let Congress destroy one of the best health care systems on the planet by passing ObamaCare?  It is now politically unfixable and we did it to ourselves because we didn’t make a loud enough noise against it.  We literally sat there and did nothing, while those elite, can-do-no-wrong politicians (all Democrats) cheated us.  Why?  Because ObamaCare was just another ploy by the Democrats to buy votes from those tens of millions of Americans who have allowed themselves to become dependent on government, the cost be damned.

Why did we let the state of New York, or any other state for that matter, pass an abortion law that is outright infanticide and allows the fetus to be killed after birth?  What’s next, euthanasia for our seniors?  Remember the 1973 movie “Soylent Green,” where they turned the remains of euthanized old people into cookies?  Could fiction become fact?

Why have we authorized the federal government to establish a Department of Education, (DoED) when education is a state responsibility?  Why did we let the DoED nationalize the education of America’s children and establish a curriculum better suited for the children of Russia?  American education has become socialist indoctrination.  Hitler must be smiling in his grave.

Why did we let the federal government pass so many environmental laws that have effectively repealed the Fifth Amendment and rendered property ownership a barren right?  The American landowner has become an indentured slave to almighty government and the environmentalists.  Today, under current environmental law, we could not build the nation’s freeway system.  Further, every building project requires a very expensive environmental impact statement that does nothing but force the builder, or the taxpayer, to pay for the weapon that will shoot him in the foot.

And why have we found it necessary to protect every wetland in America to save the planet, when 12,000 years ago over one-third of the earth’s surface was covered by an ice sheet over one mile thick?  There were no wetlands under the ice sheet.  How DID the earth and its plants and animals survive without all those wetlands?  What happened to reason, logic and common sense?

Why is it we have allowed government and the environmentalists to perpetrate one of the world’s greatest con games ever devised on the people under the guise of alleged man-caused global warming?  Why are the people allowing government to burn up their tax money by the trillions for an alleged disaster that hasn’t happened and has little-to-no basis in science?

Why are college kids dying under barbaric initiation rituals?  What makes a college kid think that it is a good idea to force another college kid to drink a gallon of 180-proof alcohol until he’s dead?  We know that high school and college kids tend to leave their common sense at home when they arrive at college, but outright murder when you know better isn’t just criminal; it’s crazy.

Why are urban ethnic groups robbing and killing each other at unprecedented rates?  Why are their cultures breaking down?  Why has the tried, true and tested family unit of father, mother and child become out-of-style or passé, a family unit that was and still is a culture’s answer to cultural stability?

Why have we allowed our standards of decency to descend into the gutter?  Why have we allowed debauchery, swearing, violence and gratuitous sex in movies and TV to become commonplace?  If we go see the movies or watch TV and accept these lower standards without any outcry, we effectively condone them.

Why is it that high-level officers at the Department of Justice and the Federal Bureau of Investigation found it perfectly OK to break the law and stage a silent coup against a sitting president by opening an investigation against him in search of a crime?  If we can’t trust the top law enforcement agencies of our country to play by the rules and the rule of law, a little thing like a constitution won’t make any difference.  Everyone knows that power corrupts and absolute power corrupts absolutely.  Is that the Alice-in-Wonderland rabbit hole Americans have decided to go down ….. at their own peril?

Why is it that the DOJ or FBI decided that a heavily-armed, overwhelming S.W.A.T. team was necessary to take Roger Stone into custody for a process crime, while other politicians, guilty of the same offense, are wandering around free as a bird?  Shall we name names?  How about Hillary Clinton, who lied to Congress and destroyed evidence that was under a congressional subpoena?  How about Huma Abedin, advisor to Secretary of State Hillary Clinton, ex-wife of sex pervert Anthony Weiner, who also lied to Congress?  How about Assistant FBI Director Andrew McCabe, who not only lied to Congress and other agencies, but whose wife received huge sums of money from Democrats for her political campaign, a huge conflict of interest for her husband, who was investigating both Hillary Clinton and Donald Trump?  And why isn’t the former FBI director under investigation for taking classified information out of his office when he was fired by Trump?  Why hasn’t an FBI S.W.A.T. team descended on their homes at the break of day with guns drawn to take them into custody?  The list of perpetrators goes on and on, but accountability is nowhere to be found.

But our lives are a mysterious contradiction.  On the one hand we constantly observe idiotic events that make no sense at all, like the ones we have just described.  But on the other hand we observe man’s humanity to man in so many different ways.  If we are in trouble, others come to our rescue, sometimes at great risk to themselves.  First responders and citizens pull people out of burning houses or cars or rescue them from drowning in frozen ponds.  During national disasters, we come together as if we were all related by blood.  If we are truly bad in heart and soul, then why do we reach out a helping hand to people we don’t even know?  As a culture we are one of the most generous on the planet.  We share our good fortune with others in ways too numerous to describe.

So how can these two sides coexist?  It is as if we live on a schizophrenic teeter-totter, with one side weighing down the other side and then the opposite side reversing the process, in a delicate balance of alleged sanity.  But what if the bad side, the crazy side, the debauchery side, overwhelms the sane, reasonable and commonsense side?  The delicate balance is gone forever and our culture collapses, which is the direction in which we are headed.

Nevertheless, truth and history tells us that if we give up on honesty, integrity, honor and morality, if we strangle ourselves in a morass of millions of laws, rules and regulations, if we abandon economic principles, if we forsake decency standards, if we give up on the foundation of our freedom and liberty as codified into law under the U.S. Constitution, we have no hope to remain as “We the People” governing ourselves under a Constitutional Republic and in pursuit of life, liberty and happiness.  We will become just another third-world socialist country in a bleak life of shared misery.  The Bernie Sanders, Alexandria Ocasio-Cortez, Nancy Pelosi and Chuck Schumer crowd and the current crop of crazy socialist presidential candidates will have won.

If that is what you want, you are not far from receiving it.  If that ISN’T what you want, you better be prepared for a long, protracted and maybe even bloody fight.  The crazies among us are only going to get crazier and our once-balanced teeter-totter life will be resting on the ground on the crazy side.

Everything Has Turned Upside Down and Stark Raving Crazy added on Sunday, February 24, 2019