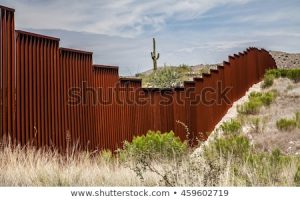 The phony “uproar” over the president’s declaration of a national emergency to place a barrier on the unprotected sections of our southern border is a necessary, timely and welcome effort.  Such a declaration is within the prerogatives of his office; in fact, his predecessor declared national emergencies at least eight times – to provide assistance to foreign nations!  By contrast, the border barrier will support our nation.  Besides, President Trump has exhausted all other avenues to repair and complete the border barrier.  But congressional Democrats have blocked him – and have weakened our nation’s security by doing so.

Security is enhanced and simplified by barriers.  That’s why we lock our cars and the doors and windows on our homes and lock up businesses and banks at night, and why so many prominent Democrats have walls around their  properties.  Barriers don’t always prevent unwanted entry, but at least they delay and complicate an intruder’s attempts.  The Democrats claim to want border security but undercut that claim by declaring that barriers are “immoral” and also “ineffective” and unnecessary because they can be breached.  But, just as with our homes, border barriers have doors through which folks can enter, be vetted and either admitted or denied entry.

As chief executive, the president is required by the constitution to “…provide for the national defense…” and his oath of office requires “…I do solemnly swear (or affirm) that I will faithfully execute the office of the President of the United States and will, to the best my Ability, preserve, protect and defend the Constitution of the United States….”  The Constitution also makes him commander-in-chief of our armed forces.  Therefore, President Trump is acting correctly by being unwilling to kick the can down the road, as others before him have.  Trump is a man of action, and he wants to solve this problem on his watch.  And, by doing so he will fulfill his obligations under his solemnly-sworn oath of office.

Many miles of our southern are a sieve through which illegals enter and re-enter – violating the federal statutes that prescribe border security.  Yet, thousands of folks from Central America – and even other countries – are being encouraged to form caravans to overwhelm the abilities of our immigration and border enforcement officials.  They bring children with them on the long trek and then use those kids to garner sympathy at their self-imposed “plight” when (if) they are confronted by our authorities and denied entrance.  But, contrast this situation with the procedures and safeguards at our airports of entry, where valid passports, and often visas, are required and baggage is subject to careful inspection.  Even returning US citizens must go through Immigration and Customs – no exceptions!

Yet somehow, the Democrats refuse to see the cognitive dissonance between these border entrance situations.  Worse yet, there are groups on the American left who actively encourage and provide assistance to illegal entrants from south of the border – including actions in contravention of existing law.  With all the news media taking pictures and writing stories about alleged “human atrocities” committed by our border security officials trying to enforce our laws, wouldn’t at least one or two of the network and print-media types check into the organizers on the left who are encouraging and aiding and abetting poor folks to form the caravans and demand entry?  Who is funding those organizers?  What are their motives?  What are their objectives?  The American people deserve a little “sunshine” on this aspect of our border security “problem.”  Do you think that just maybe the press could knock off the anti-US hyperbole and do some legitimate investigative reporting for a change?  Sunshine is a great disinfectant.

Caravans of ten thousand people at a time arriving all at once at our border is definitely a national security problem.  If the caravans were armed with weapons, they would be seen as an invasion.  However, coming unarmed and insisting on admittance is simply another kind of invasion.  Why is this so hard for half the country to understand?

Please let me know if you have an answer to this question.

Old Frank Sounds Off Regarding the Emergency Declaration added on Wednesday, February 20, 2019