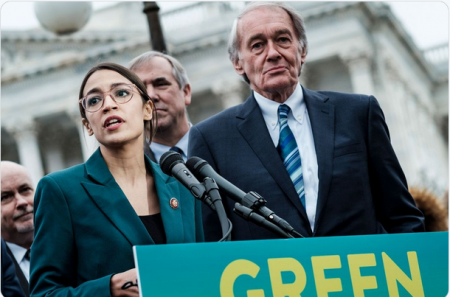 (Feb. 18, 2019) — Twenty-nine-year-old ex-bartender and freshman U.S. Representative (D-NY) Alexandria Ocasio-Cortez received thunderous environmentalist and media acclaim when she introduced her Green New Deal resolution in the House and Ed Markey (D-MA) submitted it in the Senate. It was quickly endorsed or cosponsored by scores of House and Senate Dems, including many who want to run against President Trump in 2020.

But within days the GND was subjected to rigorous analysis (and ridicule) by energy experts, President Trump, Republicans, conservative pundits and even some Democrats. Their disdain is well-founded.

Asserting yet again that “manmade climate change” poses an “existential threat” to people and planet – with only a dozen years before total disaster strikes – the Green New Deal demands that the United States convert to 100% “renewable” energy within ten years. It also proclaims an equally urgent need to abandon free enterprise capitalism in favor of 100% socialist economic and “social justice” policies.

In the energy arena, AOC’s GND requires that fossil fuels, nuclear power and even waste-to-energy and large-scale hydroelectric facilities be eliminated from the US energy mix. Coal, oil and natural gas leasing and development on federally-controlled Western lands would be banned, as would exports of those fuels.

Internal combustion cars, trucks, buses, trains and boats would be replaced with electric versions or eradicated. Airplanes would be replaced by high-speed rail. And every house and building in America would be gutted, rebuilt or retrofitted with “state-of-the-art-efficiency” technologies. That’s for starters.

The original “draft” resolution (since replaced on AOC’s website) even called for getting rid of “farting cows” – to prevent methane from increasing above its current minuscule 0.0017% of the atmosphere. So “bugs, not beef” in our diets – and no more cheese, milk, yogurt or Baskin-Robbins.

In the “social justice and fairness” arena, the Cortez-Markey GND provides that every American would get government-guaranteed jobs, with “family-sustaining” wages and pensions; free college or trade school; “healthy organic” food; “safe, affordable, adequate” and energy-efficient homes; and support for ethnic and economic “communities” that “historically” were harmed “first and most” by “dirty energy.”

Saturday Night Live could not have crafted a better parody of energy, economic and scientific reality.

But Ms. Cortez is determined to have her GND brought up for a vote in the House, where Speaker Pelosi (D-CA) worries about the spectacle that would ensue. Senate Majority Leader Mitch McConnell (R-KY) is equally determined to have a vote. Mr. Markey is outraged; he claims Republicans just want to sow discord within the Democratic Party, portray Dems as favoring extremist policies and sabotage the plan.

Meanwhile, Senator Bob Menendez (D-NJ) threatened to call police on a reporter who was “harassing” him merely by asking for his views about the Green New Deal.

Ms. Cortez has no such qualms. When asked whether implementing her GND would require “massive government intervention,” she replied: “It does. Yeah. I have no problem saying that.” Moreover, she added, we shouldn’t point fingers and say China or India or Russia isn’t doing anything like this. We shouldn’t “hold ourselves to a lower bar.” We should “choose to lead” the world in this transition.

Lead the world in economic suicide, environmental degradation, plummeting living standards, shorter life spans and societal upheaval would be a more accurate description of her GND.

But at least Democrats and environmentalists have now made clear what they will do to America’s energy, economy, jobs, transportation, infrastructure and society if they regain control of the House, Senate, White House, Deep State and courts.

What they are not doing, discussing or even thinking about is how they intend to get achieve their energy-climate-socialist nirvana … how many trillions of dollars it would cost … how many millions of good jobs would be eliminated before their promised job-creation programs theoretically kick in … and exactly how they plan to deal with the enormous human and environmental impacts.

AOC says don’t worry about the price tag. Just tax the rich more and borrow trillions more. Whether the cost is $1 trillion per year or $40 to $100 trillion in total, that is an ignorant, cavalier response. Either way, she must provide the numbers, calculations and wherewithal – transparently and with full debate.

But on environmental matters, Ms. Cortez and her cosponsors have no clue what they are talking about.

America has over a century of coal, oil and natural gas that we should use. We have vast quantities of limestone, copper, iron, and rare earth and other strategic metals that would be essential for the wind turbines, solar panels, biofuel operations, massive backup battery arrays, and thousands of miles of new electricity transmission lines that their Green New Deal envisions. Is there a snowball’s chance in Hell that they would open highly mineralized Western and Alaskan lands for exploration and mining?

Their intransigence on those resources means giving up bonuses, rents, royalties, taxes and millions of high-paying jobs. Billions of dollars in revenues to government will be replaced by billions of dollars in subsidies from government. America won’t even be able to manufacture GND energy systems because we will not have either the reliable, affordable fuels to operate factories nor the necessary raw materials.

Meanwhile, the rest of the world will continue to use fossil fuels, emit greenhouse gases, surge ahead of us economically – and sell us trillions of dollars of Green New Deal energy systems. Those that come from China might even have grid-hacker-friendly portals built right into their motherboards.

Shuttering nuclear and hydro power plants – and converting our transportation and shipping systems from gasoline and diesel – would mean the USA will need twice as much electricity as it generates today. Closing waste-to-energy facilities would add to those demands – and to landfill requirements.

Energy journalist Ron Bailey estimates that the GND would require installing some 154,000 offshore wind turbines, 335,000 onshore wind turbines, 75 million residential photovoltaic systems, 2.75 million commercial solar systems, and 46,000 utility-scale solar facilities sprawling across millions of acres. My guess is that it would require a lot more than that – plus millions of Tesla-style battery arrays.

Manufacturing and installing all those units … and the transmission lines to connect them … would require removing hundreds of billions of tons of rock, to reach and extract tens of billions of tons of ores, to create billions of tons of metals, concrete and other materials. That would be expensive, fossil fuel-intensive and habitat destructive. If it is done overseas, as most of it is today, it would involve virtually no health, safety, environmental, human rights, child labor or fair-pay protections. That is not acceptable.

One would hope their commitment to environmental protection and “social justice” would make GND supporters stalwart advocates for reform. Amendments to the GND or stand-alone bills should require that that all future wind turbine, solar panel and battery components and raw materials be “responsibly sourced” under tough US standards addressing all these issues – or we don’t import them.

There’s more. Contrary to claims by GND advocates, electricity rates would likely skyrocket – to at least the 38¢ per kWh families and businesses are already paying in Germany and Denmark. That’s four times as much as Americans now pay in states where coal, gas, nuclear and hydro generate most of the electricity. Those rates are job killers for factories, hospitals, schools and businesses.

They also literally kill people, by making it hard for poor families and pensioners to afford adequate heat in wintertime. And just imagine countless stranded electric cars, trucks and buses clogging highways, especially during snow storms, as their batteries go dead … and hundreds of people die of exposure.

GND advocates seek a total, virtually totalitarian transformation of the US energy and transportation system, economy, buildings, industries, employment base, living standards and individual freedoms. They are using American citizens as guinea pigs in this grand experiment.

They need to tell us what resources will be required … how and where they will get them … how this scheme will work. That’s not likely to happen – because they don’t have a clue, and don’t care. They also can’t prove climate fluctuations and weather events are unprecedented and caused by fossil fuels.

So let’s have those House and Senate votes on the Green New Deal. Let’s see who stands where on this.

Paul Driessen is senior policy advisor for the Committee For A Constructive Tomorrow (CFACT) and author of articles and books on energy, environmental and human rights issues.

2 Responses to "AOC Says America Should Lead the World"