Science Is Too Valuable To Be Hijacked By Politics 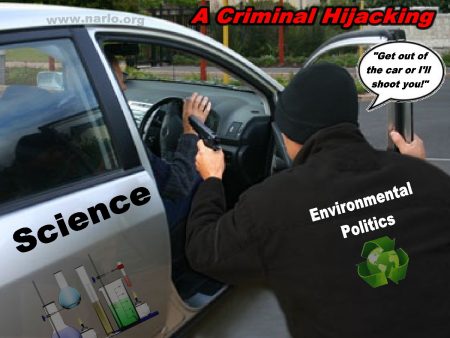 (Feb. 10, 2019) — “Science is beautiful when it makes simple explanations of phenomena, or connections between different observations. Examples include the double helix in biology and the fundamental equations of physics.” — Stephen Hawking

NOTE:  This article is about the hijacking of science by bad actors in the contentious man-caused global warming debate.

Man engaged in science even before the development of writing systems and language.  Ancient civilizations charted the positions of planets and stars.  The ancient Mesopotamians used rational science almost interchangeably with magic.  They had extensive knowledge about the chemical properties of clay, sand, metal ores, bitumen, stone and other natural materials that they used in the manufacture of pottery.

It wasn’t until the Renaissance, in what has been called the scientific revolution (1450 – 1630), that science almost exploded into the areas of geography, astronomy, chemistry, physics, mathematics, manufacturing, human anatomy and engineering.  During this time the “scientific method” became much more refined with rigorous disciplines on developing theories, processes, experiments and repeatable observations.  Science became the door to believable, substantiated truth of the natural world.

Scientist Isaac Newton once said: “If I have seen farther than others, it is by standing on the shoulders of giants.”  Newton did not make all previous scientific discoveries all by himself that he used for his own discoveries.  It is the accumulation of scientific knowledge by thousands of other scientists that came before him that allowed Newton to be one of the premier scientists of his time.

Science includes a phenomenon, a theory of why the phenomenon exists, and repeatable, verifiable experiments and observations before the theory can become accepted fact.  Pure science, if properly exercised, is self-correcting.  An event, an explanation of the event and the proof of the event through experiment and observation are then submitted to the scientific community for peer review.  Other scientists then try to replicate the original experiments to see if they can obtain the same observations and come to the same conclusions.  If they can’t, the original science is discarded until further proof is forthcoming.

Sadly, science has been corrupted for political purposes and hidden agendas.  Charlatans, on a worldwide scale, have hijacked science to dupe, scare and manipulate the masses for reasons that have more to do with global government and wealth redistribution than any pure goal of advancing knowledge.  The worst of those planet-wide charlatans are those that promote, advocate for and propagandize the fraud of man-caused global warming, AKA Climate Change.  That includes most Western governments and virtually all of the environmentalists.

But please consider.  All the noise, chatter and propaganda about future rising earth temperatures are solely based on computer models.  Although the climate scientists tell us that the computer model science is sound, they are lying through their teeth.  The reason we know they are lying is that in 2007, the IPCC Working Group 1 (WG1) assessing the physical scientific aspects of the climate system said, in their own words, “We should recognize that we are dealing with a coupled nonlinear chaotic system, and therefore that the long-term prediction of future climate states is not possible.”  The reader should focus on the part of the statement where it reads, “not possible.”

A coupled nonlinear chaotic system, by its very nature, is unpredictable because it is extremely sensitive to initial conditions.  Since initial conditions change constantly, predicting a future outcome becomes extremely problematic.  This gave rise to the “butterfly effect” where a “butterfly” flapping its wings somewhere in Brazil could theoretically bring about a Polar Vortex in Chicago, where the recent morning temperature just dipped to 24 degrees below zero.  That’s not a phenomenon or something unusual in Chicago.  It’s been that cold before.  It gets hot in Chicago as well.  That’s climate change.

The number of variables that affect long-range climate predictions are so many, with some variables so wide that scientists can only make guesses about the “value” of a particular variable at any given time.  The scientists then plug these “guesses” into the computer in the hope of predicting what will happen to the climate sometime in the future.  The future the climate scientists are talking about ranges from decades to centuries.

Some of those variables, like the sun and volcano eruptions, cannot be predicted with much accuracy.  There is some science right now that predicts a global cooling trend because of low sunspot activity.  Take your pick, but guesses aren’t science.

Yes, the output of the sun is fairly steady over time, with the exception of sunspots and coronal mass ejections, but predicting when major volcanoes will erupt is virtually impossible.  Volcano eruptions can yield massive impacts on climate, and pyroclastic clouds and ejecta from some eruptions in the last 200 years or so have dimmed the sunlight to the point that New York had a year without a summer in 1816.  One massive volcano eruption, anywhere on the planet, can render the output of their climate computer models pure gibberish.  There are an average of at least 50 volcano eruptions that happen every year.

But then there are other variables like cloud cover, cosmic rays, El Nino ocean events, ocean temperature, oscillations and currents, wind, water cycles, water vapor, earth orbit variations, earth wobble precession, vegetation and greenhouse gases like carbon dioxide (CO2) and more.  Most of these variables scientists still do not fully understand, and they are forced to make educated guesses about their values before they plug them into a computer for analysis.  Yes, they can measure CO2 in the atmosphere with considerable accuracy, but they can’t tell with certainty whether rising temperatures follow rising levels of CO2, or the other way around.

The brainwashing of the masses is so complete we have high school kids suing the Trump Administration for not doing enough on climate change.  Why have cities suing fossil fuel companies for alleged damages to their citizens.  Those types of suits have been or should be tossed out of court by reasonable judges as being frivolous and without merit.

Even worse, we have state governors and legislatures levying taxes on industrial CO2 emitters.  But like all taxes, they always filter down to the consumer as an indirect tax.  And even if all 50 states passed taxes on industrial CO2 emitters and used the money for alternative energy, it wouldn’t have any effect whatsoever on CO2 in the atmosphere.  That is because China and India are continuing to build coal-fired power plants in huge numbers and every knowledgeable person knows that coal-fired power plants emit significant quantities of CO2.  But then so do volcanoes and devastating forest fires.

These environmental nut cases want to go even farther to limit our food choices.  They want everyone to become vegetarians so that we can quit raising cattle.  Cattle, as you know, emit flatulent, chemically known as methane gas.  Methane gas is also a known greenhouse gas.  But humans emit methane gas too.  Should we quit raising humans as well?  We can abort babies at birth now, you know, like murder.

Governments and environmentalists want us out of our cars.  Cars emit CO2.  So they herd us like cattle and cram us into large cities where we are forced to walk, ride our bicycle, or take mass transit to work.  Cars are severely limited in these “rat-in-a-cage” cities.

They have convinced the masses that the masses are guilty as sin for polluting our atmosphere with carbon dioxide and the masses must “pay” for their sins in usurious taxes on everything.  But worse, Americans must give trillions of dollars to third-world countries because we have sinned against those countries as well ….. for being  smart and successful.

Coming out of the ignorant mouths of some Democrat presidential candidates is talk of some nebulous “green new deal” where somehow, as if by magic, we will wean America off of fossil fuels in 12 years ….. to save the planet!  So far the scientists haven’t invented an airplane that flies through the sky on solar power.  That’s OK.  This “green new deal” calls for getting rid of airplanes.  You’ll have to swim to Europe, or Hawaii.

Ladies and gentlemen, allegedly, all this is necessary because some scientists, the ruling class and environmentalists tell us that their climate computer models are reliable and accurate in predicting future climate conditions, and according to these computer models, future climate conditions will be “HOT” and life-threatening on a global scale.  How is that for a nightmare scenario?  Our poor young children are trembling with fear.

But wait a minute!  There are mounds of credible sources stating that government and environmental climate computer models are anything but accurate, simply because “we are dealing with a coupled nonlinear chaotic system, and therefore that the long-term prediction of future climate states is not possible.”  This statement comes from the IPCC Working Group.  Those words did not come from Standard Oil, Exxon, BP, or Shell Oil Companies.

If government is successful with this scam, they can make you do anything ….. and will ….. and have!

If two appellate courts come up with two opposing decisions on a given issue, that issue usually ends up before the U.S. Supreme Court for final adjudication.  We have two opposing global warming opinions.  The only way to settle the differences in the debate, because so much is at stake, is to put the issue into the court system in a bench trial with reliable expert testimony being given from both sides.  But those supporting man-caused global warming will do everything in their power to stop this lawsuit, because they will not be able to withstand the bright sunlight of scientific truth.  Such a legal challenge could become the Scope Trial of the 21st Century.

Nevertheless and to that end, we have drafted a “Citizen’s Petition in Support of Legal Action Against the U.S. Government and Five Environmental Groups, To Settle, Once and For All, the Scientific Validity of Man-Caused Global Warming, AKA Climate Change.”  You can review the petition HERE.  There is a link on the web page to request a printable copy of the Petition by e-mail.

Everyone is waiting for the “other guy” to make the first move.  We have made that first move.  Now it’s up to you.

Once again, unless petition signatures reach a very large number, the Petition will have no effect.  It is our hope that it will reach at least 100,000 signatures so that we can submit it to the White House.  We will be contacting influential and well-heeled interested parties to help fund the lawsuit.  If you would like to donate to our effort you can do so HERE.

If science is ever to be believed in the future, the issue of man-caused global warming must be settled now, to make sure that science will never be hijacked again for political purposes.

Ron Ewart is a nationally known author and speaker on freedom and property rights issues and author of his weekly column, “In Defense of Rural America.”  Ron is the president of the National Association of Rural Landowners (NARLO) (www.narlo.org), a non-profit corporation headquartered in Washington State, acting as an advocate and consultant for urban and rural landowners.  An affiliated NARLO website is “Only The Righteous Hear The Truth” (http://www.otrht.com).   Ron can be reached for comment HERE

Science Is Too Valuable To Be Hijacked By Politics added on Sunday, February 10, 2019