BUT REMAIN SILENT ON FAIRFAX ACCUSER 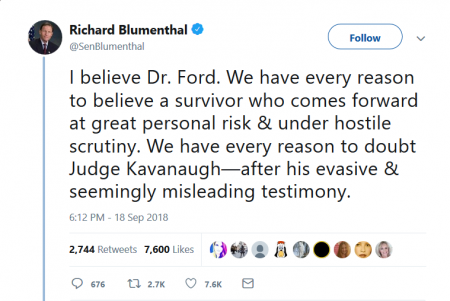 (Feb. 6, 2019) — On Sunday night, Virginia politics were further stirred with the publication by Big League Politics of a woman’s allegation of a sexual assault on the part of Lt. Gov. Justin Fairfax at the 2004 Democratic National Convention.

Fairfax, 39, is second-in-command in the Commonwealth of Virginia’s executive branch. Last Friday, BLP obtained and published a page with a racist photo from Gov. Ralph Northam’s 1984 medical-college yearbook, setting off a political firestorm which prompted the Virginia Democratic Party to call for his “immediate resignation.”

Northam originally admitted to being one of the people depicted in the 1984 photo, which contained a man in “blackface” standing next to a person in a Ku Klux Klan outfit.

According to the Associated Press, “blackface” costuming began as a form of “entertainment” in the 1830s during which white performers would attempt to replicate the facial features of blacks with makeup, fake hair and clownish attire.  Some black performers, too, reportedly donned the garb and makeup of “blackface” to earn money.

At a press conference on Saturday, Northam said he would not immediately resign and pledged to attempt to regain the trust of his fellow Virginians.  Following Saturday’s presser, the state’s two U.S. senators, Mark Warner and Tim Kaine, urged Northam to resign; others looked to Fairfax to unify Virginians and provide “healing.”

Northam was said on Sunday to have called an emergency staff meeting but has not issued a statement or appeared publicly since Saturday.

In a press release published on Twitter at approximately 3:00 AM Monday morning, Fairfax’s spokesman vehemently denied his accuser’s allegations, although he later admitted to a “consensual” encounter with her.

Fairfax’s first statement claimed that he was aware the woman had approached The Washington Post with the allegation during his 2017 campaign but that the paper had found “significant red flags and inconsistencies within the allegation” and therefore chosen not to run a story.

Later on Monday, The Post published an article in which it contested Fairfax’s statement.  “The Post did not find ‘significant red flags and inconsistencies within the allegations,’ as the Fairfax statement incorrectly said,” the paper wrote.  “…The Post, in phone calls to people who knew Fairfax from college, law school and through political circles, found no similar complaints of sexual misconduct against him. Without that, or the ability to corroborate the woman’s account — in part because she had not told anyone what happened — The Post did not run a story.”

The Post also said that Fairfax threatened to sue over its alleged “smearing [of] an elected official.”

On Wednesday morning, it came to light that Virginia Atty. Gen. Mark Herring revealed to members of Virginia’s legislative Black Caucus that while in undergraduate school, he dressed in “blackface” on at least one occasion at a fraternity party.  Herring, who is next in line after Fairfax to the governorship, reportedly did not rule out resigning.

On September 18, U.S. Senator Mazie Hirono (D-HI) and some of her Senate Judiciary Committee colleagues held a press conference in response to allegations made by Dr. Christine Blasey Ford against then-Judge Brett Kavanaugh of sexual assault in 1982.  In July, President Trump nominated Kavanaugh to the U.S. Supreme Court to replace retiring Associate Justice Anthony Kennedy.  Days before a vote on his nomination was scheduled to take place in the committee, a letter Ford wrote to Sen. Dianne Feinstein (D-CA) claiming the assault by Kavanaugh was made public and Ford’s story published in The Washington Post without corroboration.

During her remarks, Hirono faulted “the men in this country,” calling on them to “Shut up and step up.  Do the right thing — for a change.”  She said that female accusers “need to be believed.”

Hirono’s comments at the presser were followed by a statement by Sen. Richard Blumenthal (D-CT), who said unequivocally, “I believe Dr. Ford,” although Ford had not yet presented her testimony to the Senate Judiciary Committee.  On Twitter that day, Blumenthal wrote:

U.S. Senator Kirsten Gillibrand (D-NY) stood with Hirono at the presser, and Sen. Kamala Harris (D-CA) said in a separate interview that she believed Ford.

On September 27, both Ford and Kavanaugh testified to the committee in separate sessions, during which Ford said she was “100%” certain that Kavanaugh was her attacker at a high-school pool party during the summer of 1982.  In contrast, Kavanaugh said he did not know Ford, that they did not move in the same circles of friends in high school, and vehemently denied assaulting her or anyone else.

The four people who Ford said could corroborate her claim denied witnessing the incident.

Some observers expressed concern that Kavanaugh was entitled to “due process,” both constitutionally and statutorily.  On October 6, Kavanaugh was ultimately confirmed by the Senate in a 50-48 vote.

In November 2017, The Post published articles with allegations against then-Alabama U.S. Senate candidate Roy Moore without firsthand corroboration.  One of Moore’s accusers later sued him for defamation, while Moore has counter-sued her and sued three other contemporaneous accusers.

The scandal growing around Fairfax intensified Wednesday afternoon when his accuser, college associate professor Vanessa Tyson, issued a public statement through the same law firm Ford used to make her allegations public.  Tyson’s statement accused Fairfax of launching a “smear campaign” against her “in service to his political ambitions.”

On Tuesday morning, The Post & Email contacted the offices of Hirono, Blumenthal and Harris; we were unable to find a press contact or telephone number for Gillibrand on her Senate website. Both Harris and Gillibrand have announced their 2020 presidential aspirations and launched respective campaigns.

We first telephoned Hirono and Blumenthal’s Washington, DC offices and were given the email address of their media contacts. In both cases, the staffer answering our call asked us the nature of our inquiry, our name and publication, which we provided.

In Harris’s case, a press contact’s email address appears on her Senate website under “News.”

We first contacted Blumenthal, whose message was necessarily different from the others given that we are a constituent, a fact we felt we needed to disclose.  The email reads:

Good morning, I was given your contact information by the receptionist in Sen. Blumenthal’s Washington, DC office.

I am a constituent as well as a member of the media. My question for the senator is: “How should the sexual-assault accusation made against Virginia Lt. Gov. Justin Fairfax be handled going forward?  Are you as confident in the unnamed woman’s claim against Fairfax as you were in Dr. Christine Blasey Ford’s accusations against Judge Brett Kavanaugh?”

We sent a virtually identical email to Harris and Hirono’s contacts, omitting the first two sentences.

We have received no response to any of our inquiries. However, within moments after each brief call ended Tuesday morning, we noted two readers utilizing a “US Senate” ISP logging on to the site.  The IP numbers of each reader, redacted here, are different.

In one instance,  the user accessed the “About” navigational tab as well as our recent article titled, “Is Kamala Harris Another Barack Obama?”

Blumenthal does not appear to have made a statement on Tyson’s accusations of Fairfax.  The same appears to be true of Hirono, Harris and other Senate Judiciary Democrats.  On Wednesday afternoon, House Majority Whip James Clyburn (D-SC) told Fox News’s Neil Cavuto that in regard to the current situation in Virginia politics, “Let due process take its course.”