The last coal-fired power station built in Eastern Australia, the small Kogan Creek generator in Queensland, is now 12 years old. It is urgent that we build new coal-fired power on established coalfields with nearby transmission lines.

However, Green dreamers posing as power engineers, their media lapdogs and spineless MP’s support scarring the hills with wind towers, plastering the flatlands with solar panels, and wasting billions on spider-webs of new roads, transmission towers and power lines. Then when it becomes obvious that this ramshackle system will not produce reliable energy, they waste even more money on humungous lithium batteries, energy-wasting pumped storage, thumping diesel engines and power rationing (PC shorthand for rolling blackouts).

Their thoughtless interference in the management of regrowth in grasslands and forests has ensured destructive wildfires (and there will be more). Totally uninformed on what created Australia’s great grasslands and open forests, their policies are turning these into weed and pest-infested fire-prone wastelands.

The tragedy now facing towns, farmers, fish and wildlife along the Darling River is also a green disaster. They have wasted stored water on “environmental flows” and prevented more conservation of flood waters. The most significant weir on the Darling River, the Wentworth Weir, was built in 1929. And when the Menindee Lakes were filled, Greens squandered this water to the sea thus causing a water crisis for Broken Hill. All river life would benefit from more weirs and better management of the Darling River.

Greens also inflate our population by encouraging the entry of untrained and sometimes hostile “refugees”. Increased population needs more power, water, food and jobs. If they oppose expansion of reliable power and water they should also oppose immigration.

They also debase our future workforce by churning out a flood of students whose heads are so filled with green ideology and hatred of human industry that they are useless in jobs requiring some knowledge of hard science, maths, engineering or trade skills. Too many end up serving in McDonalds, the Coffee Club or the Public Service.

For too long Australian assets have been sucked into this green sinkhole. It is time we let real foresters look after our forests, hydrologists look after our water supplies, businessmen run our industries and geologists and engineers look after minerals and energy.

Ordinary Aussies have put up with green fantasies for too long – greens should beware the rising anger of the yellow vests, green shirts and steel-capped boots. 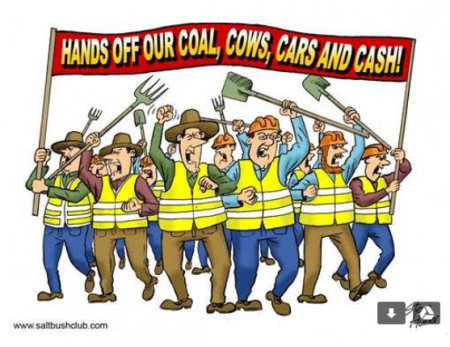 Viv Forbes is an applied science graduate with a lifetime of experience in exploration, mining, grazing, politics and investment analysis.