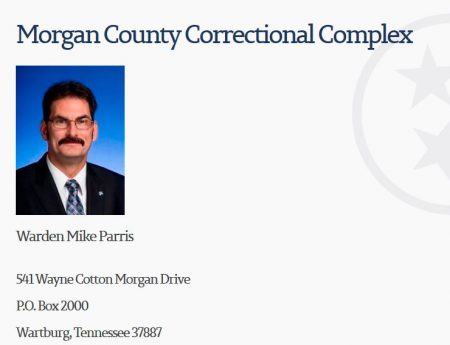 (Jan. 27, 2019) — On Saturday The Post & Email received a copy of a letter sent to ABC News affiliate WATE, Channel 6 in Knoxville, TN reporting that female correction officers at the Morgan County Correctional Complex (MCCX) are “subjected to sexual harassment by inmates and nothing is done.”

The letter was written by TDOC inmate Grenda Ray Harmer, #88710, a prolific writer and documentarian who has corresponded with The Post & Email for more than two years about Tennessee prison conditions.  Many of Harmer’s reports have been corroborated by public reporting and a November 2017 audit published by the Tennessee Comptroller of the Treasury, particularly in regard to the state’s privately-operated prisons.

In his letter, Harmer wrote that in the fall, two inmates at the all-male, state-run facility “exposed theirselves” to a female correction officer, after which one of the inmates was “transferred to another facility.”  However, Harmer reported, in December a similar incident occurred with a different female officer.  “Even though Ms. Hamby complained nothing was done,” Harmer wrote. “Sgt. Robert Martini and Unit Manager Brandon Robinson told the inmate if he exposed himself again that they would take his property,” Harmer alleged, after which the inmate reportedly defied orders and stated he “will do it again.”

“Both of these inmates should have been locked up and permanently removed from the Unit for the safety and security of the female staff,” Harmer asserted in his final paragraph. “But they weren’t. There are policies prohibiting this type of conduct that is not enforced that subjects female staff to a hostile environment that, it appears, is acceptable by MCCX male staff.”

TDOC Administrative Policies and Procedures #502.06, Section V states that the “TDOC has a zero tolerance for incidences of sexual abuse and sexual harassment within its facilities.”

Harmer concluded his letter to the station with, “Please investigate.”