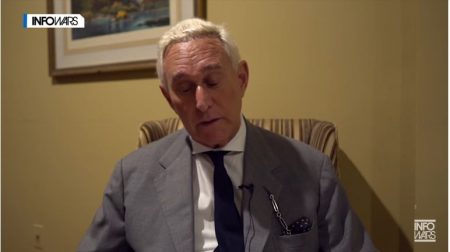 (Jan. 23, 2019) — On Wednesday evening, former informal Trump-campaign adviser Roger Stone was a guest on “Tucker Carlson Tonight” during the latter 15 minutes to detail the effect the Mueller “Russia” investigation has had on his personal, professional, and financial life.

Stone, a longtime Republican strategist and Trump supporter, said he has had to rely on a “legal defense fund” to pay attorneys to since he came under scrutiny by Special Counsel Robert Mueller’s team of investigators nearly two years ago.  Stone has not been charged with a crime, although mainstream media has reported that he is suspected of having communicated with WikiLeaks prior to that organization’s 2016 release of thousands of incriminating emails from the Democratic National Committee (DNC) and Hillary Clinton campaign.

Stone said it is his understanding that House Intelligence Committee Chairman Adam Schiff (D-CA) is opening a new investigation related to Mueller’s ongoing probe intended to unearth possible “collusion” between Russia and Trump campaign aides as well as Russia’s alleged attempts to interfere in the 2016 U.S. elections.

Evidence continues to surface that in 2016, the Clinton campaign provided information to the FBI and other federal agencies gleaned from Christopher Steele, a former MI6 agent who was paid indirectly by the Clinton campaign and DNC to gather opposition research on Trump.  The compilation of unverified information, now known as the “Russia dossier,” was used to obtain four FISA warrants on at least one Trump-campaign aide, Dr. Carter Page.

Schiff has also pledged to investigate claims made in a Buzzfeed article published Friday claiming that two “federal investigators” reported that emails and other evidence exist demonstrating that President Trump pressured his former personal attorney, Michael Cohen, to “lie” to Congress about a 2016 Trump Organization plan to build a tower in Moscow.  The plan never materialized.

While Mueller’s office disputed the report, Buzzfeed maintained its sourcing is solid.

According to The Wall Street Journal on Wednesday, Buzzfeed is expected to reduce its workforce by 15%.

Stone’s emails and other communications dating to 2016 have been thoroughly scrutinized, Stone believes.  He testified to the House Intel committee in 2017, the transcript from which Mueller requested last month.

Early in the Carlson interview, Stone said he can no longer afford his medical insurance premiums and that he was recently forced to sell his car, which he said was manufactured in 2006.  Stone also said he was forced to liquidate a fund he had established for the college education of his grandchildren.

Last month Stone associate Dr. Jerome Corsi filed a lawsuit against Mueller, the Justice Department, FBI, NSA, and CIA, alleging “illegal and unconstitutional surveillance, in violation of the Fourth Amendment and  both the USA FREEDOM Act and Section 702 of the Foreign Intelligence Surveillance Act (“PRISM”), as well as a violation of the secrecy provision the Fed. R. Crim. Pro 6(e)(2) pertaining to grand jury proceedings.”

Corsi is asking for damages in the amount of $350 million.