(Jan. 17, 2019) — On Thursday at approximately 9:30 p.m. EST, Judicial Watch President Tom Fitton tweeted that Speaker of the House Nancy Pelosi wished to take a military aircraft to travel to Afghanistan that night and on previous occasions because “Congressional spouses could fly for free on military planes.”

Pelosi and a number of other members of Congress had planned to fly to NATO headquarters in Brussels, Belgium and Afghanistan on the evening of January 17, 2019 as parts of the government constituting approximately 800,000 employees remain closed from a nearly-month-long shutdown due to expired funding.

Pelosi and her caucus had decried the conditions of the shutdown, which have caused affected employees to miss one paycheck thus far.

Fitton’s tweet referred to a 2009 JW press release which reported, in part, “Judicial Watch, the public interest group that investigates and prosecutes government corruption, announced today that it has obtained documents from the Department of Defense (DOD) detailing House Speaker Nancy Pelosi’s multiple requests for military air travel. The documents, obtained by Judicial Watch through the Freedom of Information Act (FOIA), include internal DOD email correspondence detailing attempts by DOD staff to accommodate Pelosi’s numerous requests for military escorts and military aircraft as well as the speaker’s last minute cancellations and changes. The following are a few highlights from the documents, which are linked in full below:

At approximately 3:00 p.m. EST, the president issued a letter to Pelosi, reportedly handed to her by a member of the Air Force on the tarmac as she prepared to depart, stating that military aircraft would not be available to her for the duration of the partial government shutdown.  The letter also invited Pelosi to engage with the White House in order to provide the border security Trump believes is necessary to better secure the country.

Pelosi said she had planned to visit U.S. troops in Afghanistan to thank them for their service, which Trump did on December 26 in an unannounced visit, typical of instances when presidents have visited a war zone.

Trump’s blocking of Pelosi from traveling is the latest move in an impasse which generated a now-27-day partial government shutdown which has affected employees at the IRS, Justice and Interior Departments, State Department, and the Department of Homeland Security (DHS), including the U.S. Customs & Border Protection agency.

The Honorable Nancy Pelosi
Speaker of the House of Representatives
Washington, D.C. 20515

Due to the Shutdown, I am sorry to inform you that your trip to Brussels, Egypt, and Afghanistan has been postponed. We will reschedule this seven-day excursion when the Shutdown is over. In light of the 800,000 great American workers not receiving pay, I am sure you would agree that postponing this public relations event is totally appropriate. I also feel that, during this period, it would be better if you were in Washington negotiating with me and joining the Strong Border Security movement to end the Shutdown. Obviously, if you would like to make your journey by flying commercial, that would certainly be your prerogative.

I look forward to seeing you soon and even more forward to watching our open and dangerous Southern Border finally receive the attention, funding, and security it so desperately deserves!

Pelosi has been vocal in calling upon Trump to reopen the government, which would necessitate his accepting legislation the House has passed which does not contain funding for the wall he wishes to construct on the U.S.-Mexico border.  Trump has said he will not sign any bill lacking funds for a wall or barrier.

On Wednesday, Pelosi disinvited Trump from delivering in person the customary State of the Union address which she had formally invited him to give on January 3 in the chamber of the House of Representatives on January 29.

The Senate has not yet voted on any legislation aimed at reopening shuttered government agencies, and Senate Majority Leader Mitch McConnell has maintained a low profile during what is now the longest government shutdown in U.S. history.

While Pelosi insists building a border wall would be “immoral,” other Democrats, including House Majority Leader Steny Hoyer, say it is not.

A third press release on the subject is titled, “Judicial Watch Uncovers New Documents Detailing Pelosi’s Use of Air Force Aircraft for Her Family in 2010.”

One of the “junkets” JW detailed in the second press release is “A May 6-10, 2010, Congressional Delegation to Afghanistan and Germany ‘to discuss issues of mutual interest in Qatar and Afghanistan, as well as conduct oversight on women’s issues (troops) in Afghanistan and to visit with US troops and meet with government officials in Germany.’”

Fitton continued to tweet JW’s discoveries about Pelosi’s military travel dating back to when she was Speaker from 2009 to 2011, at which time Republicans assumed majorities in both chambers of Congress as a result of the 2010 elections. 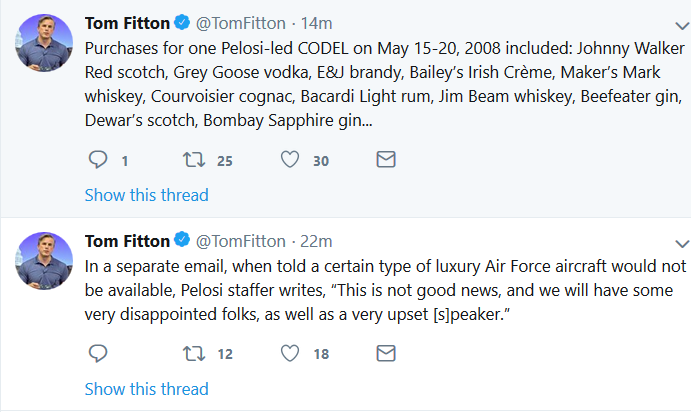 “Numerous trips were made by Speaker Pelosi between San Francisco and Andrews Air Force Base. Several of these trips included members of Speaker Pelosi’s family…” Fitton additionally tweeted, referring to a July 21, 2011 press release.