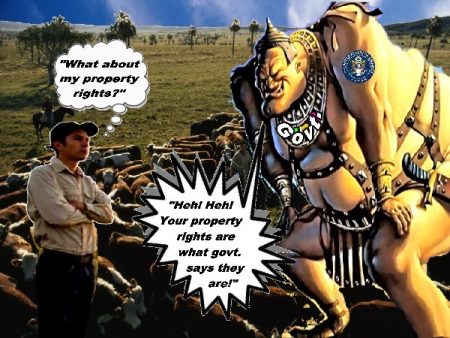 (Jan. 13, 2019) — “Oh what fools we mortals be,
When we think we have rights to property.
They were taken away when we turned our heads,
By the U.S. Supreme Court and those other traitors
We call ….. the FEDS.”  Ron Ewart

So do you think you have the right of free speech?  Hardly!  Free speech is what government allows, when and where.  Left-leaning social media (Google, Facebook, Twitter) makes sure that conservative free speech is censored.

Is the right to practice your religion a God-given right?  Think again.  Organized religion falls under the authority of the Internal Revenue Service (IRS) that grants the organized church an exemption from taxes, just as long as the church abides by strict IRS rules.  That’s LIMITED free speech, controlled by government.

Let’s take the right of redress under the First Amendment.  How is the right of redress working out for you?  When you contact your congressman or senator with a gripe and a request for redress of your gripe, what do you get?  You get a ready-made canned letter that sits in a government computer somewhere, ready to be sent out to the naïve constituent on a specific issue, at a moment’s notice, at the press of a button but doesn’t say anything.  Are you really being heard?  Not likely!

Perhaps you think that you are secure in your person, your home, your papers and other effects as the Fourth Amendment implies.  Were you aware that government agents and law enforcement can lawfully come up on your porch (trespass) and knock on your door so that they can talk to you?  That’s right.  It’s called the “knock and talk” provision handed down in two U.S. Supreme Court decision that grants government agents and law enforcement an “implied license” to talk to you whether you grant them permission or not.  No, they can’t search your home without a search warrant (maybe), but that is no solace when two armed law enforcement officers suddenly show up on your doorstep demanding to talk to you, as what happened to us in response to an article we had written.  One of those officers knocked on our door and the other officer stood about 12 feet away with his hand on his gun.  Yes, we WERE intimidated!

Now the Second Amendment is under attack from the left and several states have passed laws allowing them to confiscate your guns, if government, a relative, friend, enemy, or neighbor alleges “you might be a threat” to society, or you are “off your rocker” ….. maybe!  There is no facing your accuser.  Government just takes your guns away by force, with or without solid evidence that you were or are a threat.  You have to prove in court that you are not “off your rocker.”  So much for the Second Amendment and “innocent until proven guilty.”  Is total gun confiscation next?

God-given, natural rights are a myth.  As the image that accompanies this article says, “your rights are what government says they are.”  The dirty little secret is, in the beginning you used to have God-given, natural rights, but the government, through the legislative and judicial processes, took those rights away, year-by-year, under the false flag of Progressivism.

But this article is supposed to be about property rights, rights you just THINK you have.  Here is one definition of property rights by State Supreme Court Justice Richard B. Sanders:

“Property in a thing consists not merely in its ownership and possession, but in the UNRESTRICTED right of use, enjoyment, and disposal. Anything which destroys any of the elements of property, to that extent, destroys the property itself. The substantial value of property lies in its use. If the right of use be denied, the value of the property is annihilated and ownership is rendered a barren right.”

“While it is up to each state to define property for itself, the right to use one’s property has been universally understood to be a fundamental attribute of real property ownership. Compare Eaton v. Boston, C. and M.R.R., 51 N.H. 504, 511-512 (1872) (“the framers of the Constitution intended to protect property rights which are worth protecting; not mere empty titles . . . among those elements is, fundamentally, the right of use . . . “) and Lord Coke: “to deprive one of the use of his land is depriving him of his land. What is the land but the profits thereof?” See also John M. Groen and Richard M. Stephens, Takings Law, Lucas, and the Growth Management Act, 16 U. Puget Sound L. Rev. 1259, at 1266, 1295 (Spring 1993).”

Unfortunately, this definition of property rights has no basis in the application of the law.  It was repealed by several U.S. Supreme Court decisions and by hundreds, if not thousands, of land use and environmental laws, federal, state and local.

Georgetown dean and liberal law professor William Michael Treanor writes:  “Despite all the controversy about its meaning, the language of the Takings Clause, “nor shall private property be taken for public use, without just compensation”, is perfectly straightforward. Compensation is necessary only when property is ‘taken.’  In other words, the only time when government must compensate the property owner is when it physically seizes property. The text does not require compensation when regulations diminish the value of property.  Indeed, the clause does not even mention regulations.”  (They didn’t have land use regulations then.)

What Professor Treanor is saying here is that you really don’t have any property rights.  Only government has rights to regulate and that makes you nothing more than a feudal serf to a government King.  Your land and you personally are nothing more than collateral for the national debt.

The good professor refuses to acknowledge what happens when government “goes too far” and he doesn’t care.  Treanor has written that, “….. constitutional doctrine is irrelevant when it comes to environmental policy and law.“

The High Court has tried to address the issue of “going too far” but has left the law murky and subject to a wide range of interpretation, forcing landowners into court every time the issue of “going too far” comes up.  Most landowners don’t have the resources to take these issues to court and are left stuck, without recourse.  Even if they have the resources, they run into the roadblocks of “standing,” “ripeness” and “jurisdiction,” not to mention the not-ratified UN Agenda 21 policy.

The courts have also injected two doctrines into the mix that work against the landowner and further complicate property rights law.   The first is the “Substantive Due Process” clause and the second is “Substantially Advances A Legitimate State Interest” clause.  Who gets to decide the constitutional validity of an alleged “legitimate” state interest?  The state and the courts get to decide, of course.  What if the “state” decided to take control over all land in America, in the interest of protecting the environment?  You would need a permit just to drive a nail, dig a posthole, or fill a mud puddle.  That could be construed, and probably would be, a “legitimate” state interest.  Don’t you get it?  That is exactly what government has done.

Sadly, any government will “push” the envelope as far as it can until the people revolt openly in civil disobedience, civil war, or outright revolution.  In that the masses are mostly ignorant of their rights and short on courage, they just capitulate to government overreach until they are slaves!

Nevertheless, one of the “Bundle of Property Rights” NOT described in the above legal definition still has teeth in it.  Yes, the “right of use” is predominantly important, but what if the most important right of property turned out to be the “right to exclude?”  If the “right to exclude” is as far-reaching as the law appears to be, then every property owner, urban or rural, could exclude all government agents and law enforcement, thereby precluding trespass by these agencies to charge you with a crime, or impose fines and penalties for land use and environmental code violations.  If the government agent or law enforcement violates the “right to exclude,” (in other words, trespasses), that trespass violation could possibly be used in court as a defense to nullify any fines or penalties for code violations.  The only exception would be if the landowner contracts with government for a building or other permits, thus allowing access to the property by government for permit-authorized inspections.

Most rural landowners and urban dwellers are unaware that they can revoke the “implied license” that government agents and law enforcement have to come on your property under the “knock and talk” provisions of the two U.S. Supreme Court decisions.  As we mentioned in a previous article, in 2016 a 10th Circuit Court of Appeals decision left the door open for the individual property owner, urban or rural, to “revoke” that “implied license” with open and notorious signage.  NARLO took up on the 10th Circuit Court decision and created a powerful, copyrighted, 12″ x 18″ No Trespass sign that not only incorporates the “right to exclude” clause, but also incorporates the “revocation of implied license” that government agents and law enforcement have under the Supreme Court “knock and talk” provision.  Our sign works equally well on your home in a big city as it does in the most rural areas of America.  To keep government agents and law enforcement from exercising their “implied license” to trespass on your property, urban or rural, click HERE.

For the last 13 years we have been advocates for the urban and rural landowner and we have had significant success.  We are well-known throughout the American rural community.  In the year 2019 we intend to take our advocacy one step farther into the realm of preserving, protecting and defending property rights for both urban and rural property owners in the hope of bringing clarity to the issue.  To accomplish this task we have created the “American Constitutional Property Rights Protection Federation” with a new website and specific actions.  Much of what we have discussed in this article about property rights law is further expanded on our website HERE.  We encourage those interested in property rights to visit our new website and peruse its vital information.  Landowners, urban or rural, are in a battle for their livelihood, freedom and survival.  They either fight to preserve their property rights or become a feudal serf to an all-powerful government.

Ron Ewart is a nationally known author and speaker on freedom and property rights issues and author of his weekly column, “In Defense of Rural America“.  Ron is the president of the National Association of Rural Landowners (NARLO) (www.narlo.org), a non-profit corporation headquartered in Washington State, acting as an advocate and consultant for urban and rural landowners.  An affiliated NARLO website is “Only The Righteous Hear The Truth” (http://www.otrht.com).   Ron can be reached for comment HERE.

The Ugly Truth About Property Rights added on Sunday, January 13, 2019