What Did Sen. Dianne Feinstein Say about Border Security a Quarter-Century Ago?

“I THINK WE SHOULD ENFORCE OUR BORDERS” 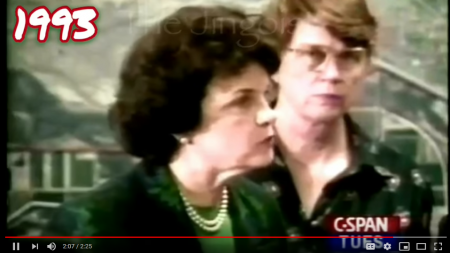 (Jan. 11, 2019) — A video montage assembled by “The Jingoist,” partially from C-Span, from 1993 and 1994 depicts Sen. Dianne Feinstein (D-CA) stating, “the people who should be here should come legally at this time” and “the day when America could be the welfare system for Mexico is gone.  We simply can’t afford it…”

Separate footage from 1994 shows Feinstein decrying the cost to taxpayers of children born in the state of California to “illegal immigrants” as well as illegals incarcerated in the state.

“…The illegal immigrants who come here and commit felonies, that’s not what this nation is all about…” she said.

Reverting to the C-Span footage in the montage, Feinstein is seen recommending that aliens who commit felonies should “serve time” “in their own country.” “I say ‘return them to their own country,'” she said.

Feinstein characterized her stance on illegal aliens as “moderate” and said that “a reasonable debate and discussion” should be conducted on the issue of immigration. “There is a problem; we’ve got to meet that problem with prudent, wise and moderate solutions, and I think we can,” the clip concludes.

At the time, William Jefferson Clinton was president.

More recently, Feinstein has criticized President Trump’s immigration policies.  During the 115th Congress, she sponsored six immigration-related bills, including “A bill to nullify the effect of the recent Executive order that temporarily restricted individuals from certain countries from entering the United States” early last year.

In 2011, Feinstein introduced “A bill to amend the Immigration and Nationality Act to provide for compensation to States incarcerating undocumented aliens charged with a felony or two or more misdemeanors” after it failed to receive a full vote in either congressional chamber in 2009.

In 1997, she introduced “A bill to provide an exception to the restrictions on eligibility for public benefits for certain legal aliens.”

Feinstein was first elected to the U.S. Senate in 1992, “the first woman elected Senator of California.”

Today, she advocates on her website for “combating illegal border tunnels” through which drugs, many of which have proved deadly to tens of thousands of Americans, flow.

What Did Sen. Dianne Feinstein Say about Border Security a Quarter-Century Ago? added on Friday, January 11, 2019