BOTH SAY DEMS WILL NOT FUND IT

(Jan. 11, 2019) — At approximately 1:45 PM EST, Sen. Lindsey Graham, the new chairman of the Senate Judiciary Committee, tweeted that he met with President Trump about border security and that both reached the conclusion that “Democrats don’t want to make a deal and will never support border wall/barriers.”

Graham’s statement comes on the 20th day of a partial government shutdown coinciding with the first missed paycheck for federal employees consequently furloughed.

The shutdown commenced at midnight on December 21 when funding in the previous appropriations bill expired for those agencies, which include the Transportation Security Administration (TSA), portions of the State and Justice Departments, and the Departments of the Interior, Agriculture and Homeland Security (DHS), including the U.S. Customs & Border Protection Agency (CBP). At that time, the U.S. House, then led by Republicans, and the Republican-led Senate could not agree on a spending bill which would have included at least $5 billion to construct or improve border fencing or barriers along the U.S.-Mexico border.

During the 2016 presidential campaign, Trump had made a border wall a signature goal if he were to be elected. Last March, he pledged not to sign another appropriations bill which did not contain money for the border wall he believes necessary to repel the entry of drugs, human traffickers, and individuals entering the U.S. illegally.

In negotiations with now-Speaker of the House Nancy Pelosi (D-CA12) and Senate Minority Leader Chuck Schumer (D-NY) over the last week, Pelosi has reportedly refused to consider any funding for a wall even if Trump were to sign an appropriations bill reopening currently defunded government agencies.  In more recent discussions, Trump agreed to change the intended structure to a “steel barrier” based on Democrats’ objections to the specter of a concrete wall.

Prior to becoming Speaker, Pelosi said that a wall would be “immoral, ineffective, and expensive” and that “it will not be funded.”  Thus far, she does not appear to have commented as to whether or not the border-wall sections already in existence should be dismantled.

On Thursday, Trump, DHS Secretary Kirstjen Nielsen, U.S. senators from Texas Ted Cruz and John Cornyn, and others traveled to McAllen, TX for a roundtable discussion and tour of the holding facility there.  Also in attendance were Reggie Singh, the brother of slain Newman, CA Cpl. Ronil Singh, who was killed by an illegal on December 26, and the parents of a Border Patrol agent killed during a family outing while trying to defend his property from an illegal alien.

In an interview aired on the Fox News Channel’s “Hannity” show on Thursday night, host Sean Hannity’s in-person interview with Trump in McAllen included a number of questions about the shutdown and impasse on border security, including the impact on federal workers who will not receive a check for the first time on Friday. Trump responded that he is sympathetic to their plight but that many support his position and that he also cares about American citizens whose relatives’ lives have been lost as a result of illegal-alien entry into the country.

The New York Times and Democrats have said that Democrats want border security but oppose a physical barrier.

In public remarks Thursday, Pelosi claimed that the deaths of Americans at the hands of criminal illegal aliens are “tragic situations” that nevertheless would not necessarily be prevented by the presence of a border wall.  “It’s a tragic situation at the border,” Pelosi said. “Two little children died in the custody of the Border Patrol, but the plural of anecdote is not data, and as painful and horrible, one death is more than we should be able to bear, whether it’s the corporal or whether it’s the children, but the fact is we have to have public policy that secures our border. What the president is proposing will not eliminate those possibilities.”

Trump, VP Mike Pence and others in the administration have said they will not retreat from their position that the border wall is essential and will be built, either by congressional appropriation or by Trump possibly declaring the southern border a “national emergency” and invoking executive authority.

On Friday morning, Trump tweeted that conditions at the border are “far worse than almost anyone would understand.” 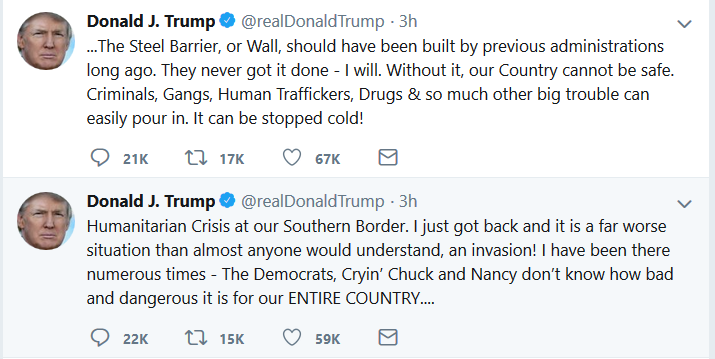 On Friday afternoon, he asserted that new sections of the wall have been built despite contrary reports from the “Fake News Media,” as he often terms the mainstream media. 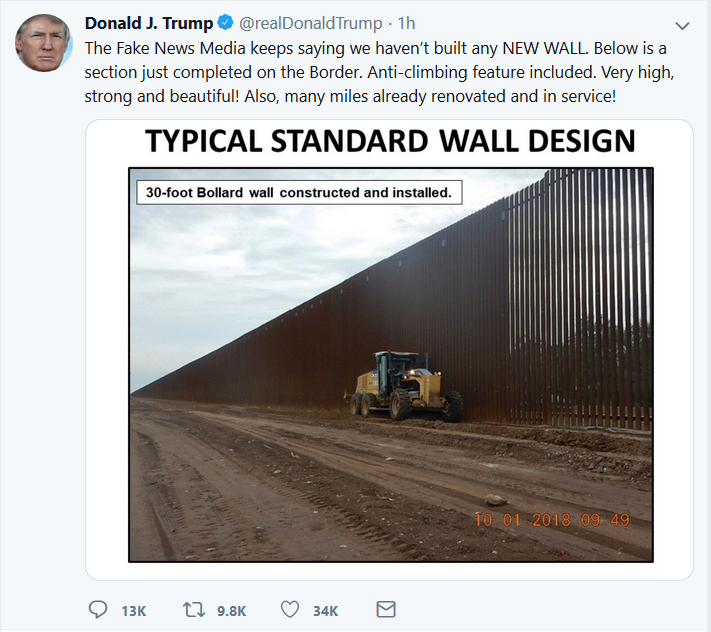 Leaving aside the semantic difference between a wall and a fence, Trump is correct that fencing in San Diego, for example, significantly reduced “illegal traffic” when originally built decades ago. It also pushed border-crossers east, away from coastal San Diego, to areas where the fencing is less robust. Partly as a result, thousands have perished trying to trek through deserts and mountains.

The other locales Trump mentioned do have many miles of existing fencing that is being replaced or strengthened. To date, the fencing is a hodge-podge of projects covering about 650 miles.