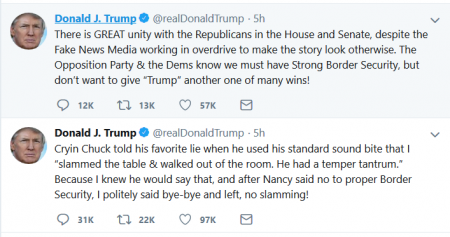 (Jan. 10, 2019) — In the midst of a trip to McAllen, TX Thursday afternoon, President Donald Trump tweeted that he has decided not to attend a meeting of the World Economic Forum (WEF) next week in Davos, Switzerland.

On Wednesday, The Wall Street Journal reported that the administration was weighing whether or not Trump would travel to Switzerland given the partial government shutdown then in its 19th day.

The White House and the US House of Representatives have been at loggerheads since midnight on December 21, 2018, when funding for approximately 25% of the federal government expired. While the house was then led by Republican Paul Ryan, and Republicans returned to session to pass an appropriations bill with $5.7 billion for wall funding, as Trumpet requested, the U.S. Senate did not have the required devotes to pass the measure. Agencies such as the National Park Service and the Department of Agriculture have been affected by the shutdown, with employees reportedly missing their first paycheck this week.

Trump has said he will not retreat from his stance that a barrier must be built on the border and that Congress must appropriate funds for it or he will declare a “national emergency” to obtain the funding by executive authority.

In a meeting with congressional Republican and Democrat leaders Wednesday afternoon, Speaker of the House Nancy Pelosi reportedly said that even if Trump signed an appropriations bill to fund shuttered government agencies, as she and Senate Minority Leader Chuck Schumer called upon him to do Tuesday night following his address to the nation, Pelosi would be unwilling to provide funds for a wall or barrier.

Schumer claimed that Trump “slammed the table” as the discussion took place, which Trump denied.  Vice President Mike Pence was quoted as having said of the meeting’s abrupt end, “The president walked into the room and passed out candy. I don’t recall him ever raising his voice or slamming his hand.”

Trump gave as his reason for canceling the trip “the Democrats intransigence on Border Security and the great importance of Safety for our Nation.” He then sent his “warmest regards and apologies to the” WEF.

In remarks made to the White House press Corps prior to his embarking upon Thursday’s trip to McAllen, Trump said that if the impasse over funding the wall and reopening government cannot be overcome, he will consider declaring a national emergency in order to authorize funding to construct or reinforce a border barrier.

Earlier on Thursday, Trump posted a video of former White House occupant Barack Hussein Obama outside the White House, with Vice President Joe Biden at his side, stating in 2014 that “a humanitarian crisis” existed at the US-Mexico southern border. The video clip was accompanied by Trump’s commentary of, “President Obama, thank you for your great support – I have been saying this all along!” 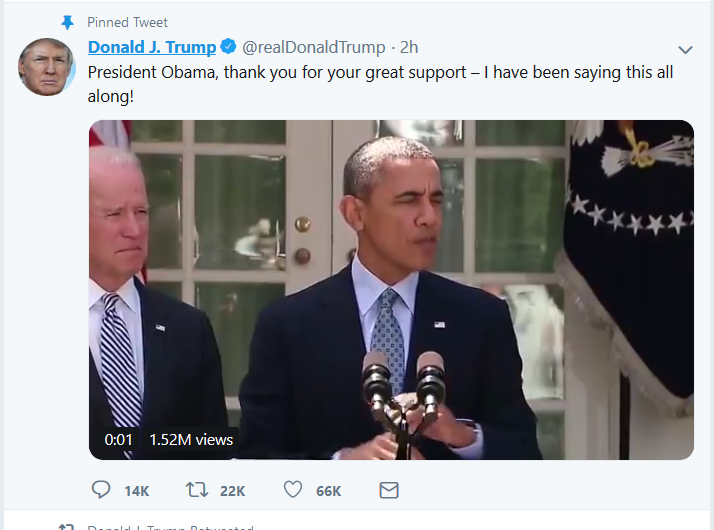 Trump did not go to his Florida resort, Mar-a-Lago, as planned over the Christmas holidays, instead remaining at the White House and calling upon Democrats to negotiate over border security and the government shutdown.  At that time, Pelosi was vacationing in Hawaii; it is unclear where Schumer spent his holiday break.

Update, 2:17 p.m. EST:  Trump is speaking in McAllen on border security, crime, human trafficking, and “the wall.”  “I think we’re winning the battle in a very big way,” he said.  He is accompanied on the trip by Homeland Security Secretary Kirstjen Nielsen, and on his left is Reggie Singh, whose brother was killed December 26 in Newman, CA by an illegal alien.