“HE DOES NOT HAVE LONG TO LIVE” 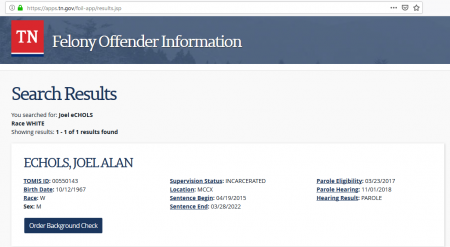 (Jan. 8, 2019) — The Tennessee Department of Correction (TDOC) record of an inmate whose wife says he is dying of Stage IV cirrhosis of the liver at the Morgan County Correctional Complex (MCCX) in Wartburg indicates that he was granted parole after a November 1, 2018 hearing, but he remains incarcerated and scheduled for unrelated medical treatment this month at a different facility.

Joel Echols, #550143, his wife and three members of their church attended the hearing on November 1 and parole was granted on the condition that he complete a nine-month course, Mrs. Echols told The Post & Email on Monday. However, she said that he is now past the point where medical intervention will make a difference.

Mrs. Echols’s early efforts to secure a seat for her husband in the Therapeutic Community (TCOM) class are substantiated by numerous emails she exchanged with TDOC officials beginning in February 2017 which The Post & Email has seen.

A parole hearing on May 18, 2017 resulted in a denial of release and recommendation that he take TCOM, a course for inmates incarcerated for alcohol- and drug-related offenses.  In early November 2017, Echols was sent to MCCX specifically to take the class, which was not immediately available to him because of his medium-security classification, Mrs. Echols’s emails show.

Other Tennessee inmates have written that their Hepatitis C has gone untreated for years.  Two years ago, Dave Boucher of The Tennessean reported that Gov. Bill Haslam asked for $2 million to treat prisoners with the disease, “half of what the Department of Correction requested to combat an epidemic raging behind prison walls.”

Of late, Mrs. Echols has requested a medical furlough or compassionate release at the highest levels of the TDOC given that her husband’s daily reports of his symptoms and lab results indicate dire circumstances.  In a recent handwritten letter to his wife shared with The Post & Email, Echols stated that some of his lab results equate to “dead.”

She hears from her husband generally once daily at approximately the same time each day, she said, as well as by mail.

In a November 6, 2018 email, a TDOC official indicated to Mrs. Echols that a medical furlough requires “many weeks to consider” despite Echols’s advanced-stage illness.  The same official, Mrs. Echols said, told her on the phone that her husband “didn’t need” the course.  Another said he would remove the requirement from her husband’s record, Mrs. Echols said.

“In October, Dr. Wiley was telling me that they were going to get Joel started on the Hep C treatment and when he gets parole he can take the remaining treatment with him and they will set him up with a doctor on the outside,” Mrs. Echols said on Monday.  “Then I talked to Dr. Williams in November and he said that Joel’s Hep C treatment is dependent on his varices treatment. So it’s always a different story depending on who you talk to.”

In her original contact with The Post & Email January 4, Mrs. Echols wrote that “Dr. Wiley told me in October 2018 that Joel probably has a year to live, so I guess just enough time to finish TCom” and that currently, “they only monitor his blood and tell him he is dying.”

“On August 2, he refused an endoscopy and colonoscopy because he was so close to the parole hearing. and it takes a couple of months to schedule it; he didn’t want to miss his parole hearing,” Mrs. Echols said.  “So he talked to Dr. XXXXXX, and he said it ‘won’t hurt’ to put it off.  This time, though, he had to sign a refusal, and four days later he was denied Hep C treatment again.”

“On September 20, Dr. XXXXXX denied an in-house medical furlough because he said he’s not following the treatment plan, but there is no treatment plan.

“When he went to his parole hearing, Dr. Wiley said he would send a case manager to talk to him and stay with him during the parole hearing.  She spoke with him once; he wanted her to talk to him about three times, but it didn’t happen.  Then she didn’t get to go to the parole hearing.  Before the hearing, she talked to one of the Parole Board members and gave her a letter stating that he is in Stage IV cirrhosis and given his blood-platelet count, even if he gets treatment now, it probably won’t help him.”

Following the November 1 hearing, Echols enrolled in the class, which began November 26, on the basis that after 30 days he would receive an evaluation as to whether or not it is benefiting him.  However, on Monday Mrs. Echols said that the evaluator, who was familiar with her husband’s medical condition, “quit on the 30th day,” and the evaluation was completed by someone else.  “She said Joel would benefit from it,” Mrs. Echols said.  “He told the truth at intake at Bledsoe that he had used hard drugs in the 1980s, and I told Dr. Casey that.  Dr. Casey then questioned a marijuana charge from 2013 and a DUI from 2016.  I told him the DUI was never mentioned by the TCom team; they only talk about the drugs from the 1980s.”

In an email to a TDOC supervisor composed the same day as the November 1 parole hearing, Mrs. Echols wrote, in part:

You said you reviewed his file and that you didn’t think he needed to take TCOM and that you would send a letter to parole board stating that to be placed in his file.  Joel’s parole hearing was today, she recommended release after he completed TCOM.  She said she could not change what the parole board had already recommended about TCOM but parole board as a whole can, but she alone could not.  I don’t know if they have a letter from you, she didn’t mention it.

Sir, my husband is in stage 4 liver cirrhosis and he is very sick.  I do not know if he will make it through this 9 month program, with or without treatment.  He has been denied treatment of Hep C several times and his health is declining daily.  I don’t want him to die in prison, I want the time he has left to be spent with his family and church.

In a December 9, 2018 email to a TDOC official, Mrs. Echols wrote, “Today Joel’s eyes are yellow, he does not have long to live.  I have been telling you this for almost two years, Dr. XXXXXX told me in October that Joel has a year to live, now it’s down to 10 months, but Joel feels his body changing and knows it will not even be that long.  You have the power to let him come home to die, you know he doesn’t need this class. Is his life really only worth the money that the prison gets for this program?”

Soon, Mrs. Echols said, her husband will go to DeBerry Special Needs Facility for the endoscopy and colonoscopy.  “They’re looking to see if those veins are raised above his skin because they can rupture any minute.  He has severe nosebleeds, severe liver and kidney pain, edema in his legs, severe sugar crashes, swollen abdomen and he is in duress because of the lies and uncaring system.  It’s hard to sit there and watch somebody go through this and nobody will help…”