“THE WALL IS COMING” 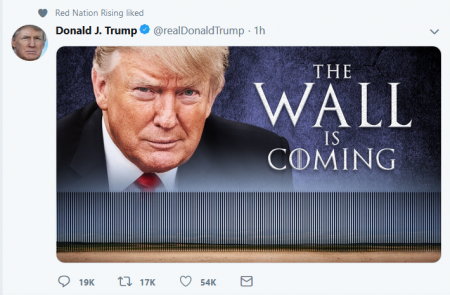 (Jan. 5, 2019) — At approximately 9:00 p.m. on Saturday, President Donald Trump tweeted a graphic of himself with the words, “The Wall is Coming” in all capital letters, with emphasis on the word “Wall.”

Earlier in the day, Trump tweeted that a Saturday meeting between administration officials and congressional Democrats had not broken the impasse over funding for the border wall which Trump wants to erect along the US-Mexico border with the intention of keeping out aliens entering the United States illegally, of which there has been a dramatic rise since 2017.

On Saturday evening he also tweeted that he and members of his circle would be meeting at Camp David, the presidential retreat in Maryland where Trump has seldom spent time since taking office, to discuss “Border Security and many other topics.”

At midnight on December 21, funding for approximately 25% of the federal government expired after Congress failed to agree upon and pass a bill which Trump was willing to sign. Last March, Trump said he would not sign another continuing resolution (CR) which did not include funding for a border wall, which he says is necessary to protect “national security.”

Democrats have resisted that request, stating that they want “border security” but not a wall, which newly-minted Speaker of the House Nancy Pelosi has described as “immoral.” Democrats have said they favor technology to monitor border crossings to include drones and other measures rather than a physical wall.

At a press conference on Friday following an hours-long meeting with Pelosi, Senate Minority Leader Chuck Schumer and congressional Republican leaders, Trump was asked by a reporter if he had considered using his power as chief executive to order the wall built. Trump responded that he had considered the option given that he believes the porous southern border constitutes a “national emergency” and that he “may do it.”

On Saturday afternoon a reporter for The New York Times tweeted that Trump is mulling the option while aware that it would likely be immediately challenged in federal court.

In unprecedented moves, many of Trump’s executive orders and policy announcements have been taken to court, with a single federal judge at times declaring one or another of them unconstitutional. Last June, the U.S. Supreme Court upheld Trump’s modified executive order issuing a travel ban on citizens from certain countries.  The high court is expected to issue an opinion by spring as to whether or not the Obama-era “DACA” program must remain open in the wake of former Attorney General Jeff Sessions’s announcement that it is unconstitutional and federal judges ruling that the program must continue.

Trump has insisted on a minimum of $5.6 billion for wall funding in any new appropriations bill, which the Democrats say they will not provide. Democrats now control the House of Representatives, while the Senate has a majority of Republicans. Senate Majority Leader Mitch McConnell has said that any bill the president will not sign will not be raised for discussion in the upper chamber of Congress.