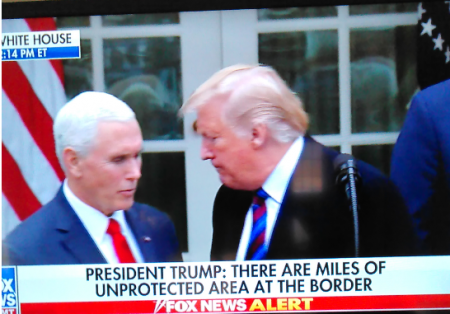 Last March, Trump had said he would not sign another continuing resolution appropriations bill without funding for the border wall on which he campaigned heavily for the 2016 election.

Pelosi implied that no agreement to break the impasse between Democrats and Trump had been reached, describing the meeting as “contentious” at times.  Pelosi has called a border wall “immoral” and vowed not to provide any funding for one.  After the new Congress was sworn in on Thursday, the House passed a bill aimed at reopening the shuttered parts of the government but without any funding for a wall.

Moving to the shutdown and Trump’s border concerns several minutes in, Trump said that his discussion with Democrats was “very productive” and that another meeting will occur “over the weekend.”

He sad he advocates for drug-detection technology and improved services at ports of entry on the southern border with Mexico, as do the Democrats, but that “proper border security” is still lacking in order to keep out illegal aliens such as the man who killed Newman, CA Cpl. Ronil Singh on December 26.

Trump said he spoke with Singh’s wife on Thursday.

“They come in through these vast open areas,” Trump said.  “It’s just open space.”  He said he “explained” that view to the Democrats, along with his concerns about “traffickers” taking people over the border as captives.

“We built a brand-new wall in San Diego,” he said, which is “working really well.”  “The only way you’re going to stop” human trafficking, Trump said, is to erect a wall.

He said he told the Democrats that he wants $5.6 billion for “national security.”  “We’re not playing games; we have to do it,” he contended.

Trump said that the Democrats will be sending over a number of “experts” to the upcoming discussion and that Republicans will dispatch their own.

“We need border security,” he repeated at 2:11 p.m., and said that “steel companies that were practically out of business” when he became president will build the barrier he wants.

At 2:12, Trump asked Pence to speak, relinquishing the podium at 2:15.  Pence said that the goal of this weekend’s meeting is to bring the shutdown to a close while providing for better border security.  He called the earlier discussion “constructive.”

McCarthy spoke commencing at 2:18, stating that “We want to solve this problem.”  McCarthy said he is making a “pledge” to work with “anyone” to solve the impasse.

At 2:21, Scalise spoke, at which point news coverage broke away for a few minutes.  Coverage resumed, with reporters given an opportunity to ask questions.