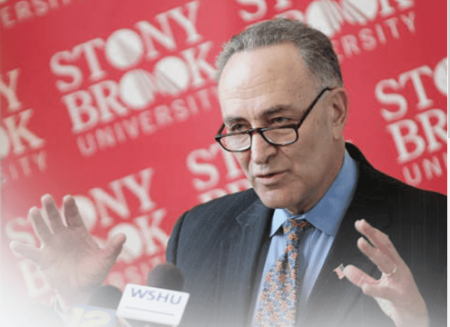 I may be singing to the choir with this, but the media are having great fun today proclaiming that President Trump was “airing Oval Office ‘bickering,’” as if meeting with the opposition party heads in the Oval Office is something “strange” and that exchanging views is “bickering.”  I watched a snatch of the “play by play” and noted that the Senate Minority Leader, the “honorable” senior Senator from New York, answered the President’s request for funding the wall — as opposed to shutting down the government unless another “stopgap” short-term budget agreement could be reached — by announcing that of course he “is for border security… just not a wall.”

One should invite the honorable Senator Schumer into the real world, where people without 24/7 taxpayer-funded “protection” actually exist and must cope.  Nobody in Senator Schumer’s New York would dream of not having doors that lock – and anybody who has ever been to “the City” — finds multiple locks and reinforced hinges on everybody’s apartment door.  “Why is that?” one wonders?  Ahh… maybe it is to deny entry to folks who might wish to cause the occupants harm?  Just for the record, folks who might wish to harm or rob or otherwise “disruffle” are found in abundance throughout the “City.”

So, the brilliant Minority Leader has millions of fellow New Yorkers who secure their dwellings using doors with locks for safety so as to disallow entry to strangers, understanding that some might wish to harm them.  This in no way presupposes that every person ringing the bell or knocking on the door is a miscreant; it just means that the occupants feel it is prudent to not allow just anybody in.  So, if such behavior is deemed necessary for the security of one’s home, why is it not necessary for our nation’s southern border?

Senator Schumer stated that he wants “border security,” but without a wall.  What we don’t know is how in the heck he thinks that such is possible?  We all know that walls have doors, so they do not totally deny entry.  Rather, they permit screening prior to admission, and those who don’t meet our standards don’t get in, just as the doorbell-ringer on the other side of the locked door of one’s apartment in New York City is denied entry until that person is deemed safe and acceptable.

But without a wall with doors, just how does Senator Schumer assume we could “secure” the border?  How does he think we might be able to intercept and sort through everybody coming across our thousands of miles of open borders?  And what if those who do cross and are apprehended refuse to leave?  Do we arrest them?  And, if we do arrest them for entering without permission, do we grant them legal services and court hearings, and if so, to adjudicate what?  How can a court quibble with the fact that such persons entered the country without permission – a CRIME.  So what is the possible defense?  That the person was lonely?  That the person felt unsafe in the place he/she was born?  That the person can’t find work?  None of those “reasons” disposes of the CRIME of illegal entry.

If somebody from another country flies into JFK, or Dulles, or Atlanta, or Miami, or any other international airport of entry, he must produce a passport and in many cases a visa.  His entry documents are checked and if they are found wanting, he is returned to his origins and the airline that boarded him for the flight to the US is penalized.

But walking across our southern border is supposed to be somehow “secured” if we don’t have walls, with doors, to sort people out?

Nobody in the media is asking Chuck Schumer or Nancy Pelosi any questions about how “border security” can be provided without walls.  Why is that?  Remember the leftist media “inform” us that many folks in the Caravan claim to seeking refuge in the US to escape rampant gang activity at home – but in the very same Caravan, there are MS-13 gang members galore?   And let’s not even mention the rampant infectious diseases that the Caravan members brought with them, as witnessed by the medical tents in the encampment on Mexico’s side of the border… Do you want unvaccinated kids, or those with TB or measles, or polio, or diphtheria, and worse, in class with your elementary school sons or daughters or grandchildren???  Earlier, we were crowing that such diseases were no longer present in our population and now, all of sudden … They’re baacck…

Would Chuck and Nancy prefer that instead of having a wall, with doors, we police the southern border with some combination of police, ICE, military forces, and maybe canine officers?  What method would they approve of for these forces to employ to stop illegals from crossing our border?  Well, we’ve already been told that tear gas is taboo, and siccing police dogs on them doesn’t sound very acceptable, either.  How about a minefield?  Nope, clearly that’s out.  Water cannons?  Nah.  All right, then tell us what is acceptable?

Without a doubt the most effective and humane method of border security is to have a wall, and a regularized method of granting entry.  Just wading across the Rio Grande is NOT security!  It is insanity – and Schumer and Pelosi and the bloody media KNOW IT.

When will the liberals finally admit that their stance on this issue is not only disingenuous, but dangerous as well?

If you have any other ideas on this, I’d love to read them.

Old Frank Asks: “What is Border Security without a Wall?” added on Friday, December 14, 2018