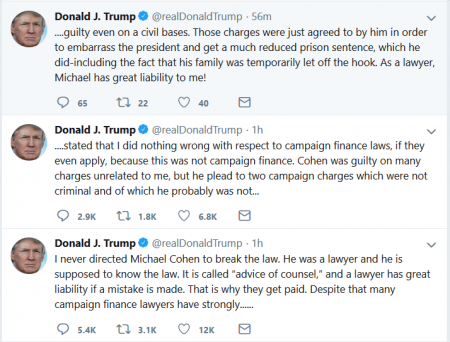 (Dec. 13, 2018) — On Friday morning, President Donald Trump responded on Twitter to the sentencing of his former personal attorney, Michael Cohen, to three years in prison after pleading “guilty” to tax evasion and “lying to banks.”

Cohen was prosecuted by the U.S. Attorney’s office for the Southern District of New York for those offenses.  On Wednesday he appeared in a Manhattan federal courthouse along with his family, including his grown children and parents, to much media fanfare which heightened after he appeared to implicate Trump in wrongdoing during his sentencing statement.

Along with the offenses associated with his personal businesses, in August Cohen said he made “hush money” payments to two women on behalf of an unnamed presidential candidate at the candidate’s “direction.”  In late November, Cohen said he was dishonest when testifying to Congress about the timing and duration of a proposed Trump Tower in Moscow with the purpose of allegedly shielding Trump from further scrutiny over the transactions. The edifice was never built, and in 2016 Trump said on the campaign trail that he had “no deals” with Russia.

An investigation assumed from the FBI in May of last year by Robert Mueller has focused on Russian interference in the 2016 election and possible ties between members of the Trump campaign and Russian operatives based on allegations of “collusion.”

To date, despite more than two dozen indictments, none has cited the alleged crime of “collusion.” In an interview with members of the House Judiciary and Oversight & Government Reform Committees last Friday, former FBI Director James Comey said he did not know the meaning of the word.

In a seven-page memorandum, the Special Counsel’s office detailed Cohen’s recent claim that he lied to Congress but stated several “mitigating” factors and recommended no specific sentence.

Trump has denied the allegations of sexual encounters with the women and said on Thursday, repeating his now-personal attorney’s statement from August, that he has done nothing wrong.  “I never directed Michael Cohen to break the law. He was a lawyer and he is supposed to know the law,” Trump tweeted.  “That is why they get paid.”

Pauley agreed, stating, “But somewhere along the way, Mr. Cohen appeared to lose his moral compass.  As a lawyer, Mr. Cohen should have known better.”

In a whirlwind of renewed “impeachment” speculation, the media has focused on the fact that during his sentencing Wednesday, Cohen said that some of his actions were an effort to “cover up” Trump’s “dirty deeds.”  Cohen also reportedly said that his sentence “freed” him from Trump’s influence.

However, Trump contended that Cohen “has great liability to me!”