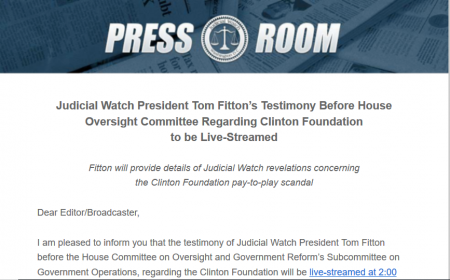 The Subcommittee on Government Operations announced the hearing, which was rescheduled from December 5 due to the death of former President George H.W. Bush, on November 21.

Through a number of FOIA lawsuits, Fitton’s organization has been investigating allegations that Hillary Clinton engaged in a “pay-to-play” scheme connected to the Clinton Foundation while she served as Barack Obama’s Secretary of State between 2009 and early 2013.

On Tuesday night, investigative journalist Sara A. Carter reported on “Hannity” that the Clinton Foundation is under investigation and that there are “lots of unsealed indictments” allegedly associated with that probe and others. Hannity affirmed that his sources have indicated forward movement on such an investigation.

Judicial Watch recently filed a Freedom of Information Act (FOIA) lawsuit against the U.S. Department of Justice for all records of communications involving any investigation by the Federal Bureau of Investigation’s (FBI) into the Clinton Foundation.

On December 6 a federal judge opened further discovery in the Judicial Watch lawsuit that led to the first public disclosure of the Clinton email scandal.

Live-streaming of Fitton’s testimony can be accessed here.

As this article went to press, Fitton tweeted about his upcoming appearance on Capitol Hill.