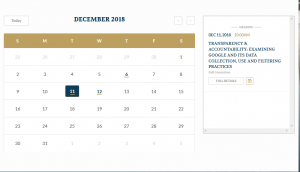 (Dec. 11, 2018) — Beginning shortly after 10:00 a.m., Google CEO Sundar Pichai took his seat in the witness chair to answer questions from members of the House Judiciary Committee about allegations of bias against “conservatives” and the company’s dealings with China, which prohibits free use of the internet to its citizens.

Chairman Bob Goodlatte gave an opening statement congratulating the company on its massive success while also stating that concerns have been raised about the “algorithms” Google employs in users’ searches.

Ranking member Jerrold Nadler, who is expected to become chairman of the committee when the new Congress is seated early next month, attempted to discredit the idea of Google’s alleged “conservative” bias and said he would like to see Google do more to protect users’ privacy and police “hateful” speech.

At 10:30 a.m., Nadler said he is concerned about reports that Google is working with China to develop search algorithms which accommodate the communist nation’s censorship practices.

At 10:31, Pichai was sworn in by Goodlatte, who said Pichai is the only witness today.  The company chose not to participate in past congressional hearings about alleged social-media bias.

Pichai said in his opening statement that he joined Google in 2004 and has served as CEO for the last three years.  He said that he came to the U.S. 25 years ago and claimed that he “leads this company without political bias.”

Goodlatte began the questioning, focusing on privacy settings and how much tracking Google conducts on an Android phone user.  Pichai responded that Google encourages users to do regular “privacy checkups,” a service the company offers in its users’ dashboards.

Goodlatte asked if YouTube, a subsidiary of Google, can take a more balanced approach to encourage wider political discourse.  “Anything to do with our civic process, we make sure we do it in a non-partisan way,” Pichai responded.

Nadler was next, inquiring about a “bug” Google announced it found in its social-media platform, “Google+,” which was not immediately made public.  The platform was then scheduled to close in August, but that timeline has been accelerated to April 2019, Fox News reported early Tuesday morning.

Nadler also asked Pichai about any known Russian influence in the U.S. 2016 elections, which Pichai said was confirmed on the part of two Russian entities.

Nadler then asked what YouTube is doing “to prevent the spread of white supremacy,” to which Pichai said if “any violations” of the company’s “hate speech” policies are detected, the content is taken down.  Whether or not a warning is given first, Pichai said it depended on the situation.