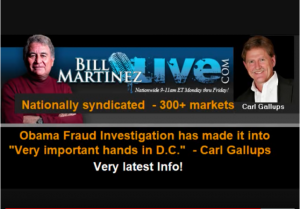 (Dec. 10, 2018) — On Thursday, December 6, 2018, “Freedom Friday” host Carl Gallups interviewed with radio host Bill Martinez, as he has several times previously, in a discussion of the singling-out by Special Counsel Robert Mueller’s prosecutorial team of Dr. Jerome Corsi, one of the earliest and well-known writers to gather information about Barack Hussein Obama’s constitutional eligibility or lack thereof to serve as president.

The interview is here:  https://www.youtube.com/watch?v=DWFU_BDvbWk

Last Monday Corsi announced through his attorneys that he filed a 78-page criminal complaint with Acting Attorney General Matthew Whitaker’s office, several other government offices, and the Washington, DC Bar Association asking that Mueller and his prosecutors be disbarred as a result of the tactics Corsi claimed they used during their interrogations of him regarding the “Russia” investigation.

Since May of last year, Mueller has been tasked with investigating the extent to which Russian operatives interfered in the 2016 U.S. elections and whether or not any members of the Trump political campaign “colluded” with Russians to provide Trump with an advantage over Democrat Hillary Clinton.

Corsi has claimed that he had no direct communication with WikiLeaks, which released thousands of emails considered highly damaging to Clinton’s campaign between July and early November 2016, just days before the presidential election. Corsi also claims that his conclusion that WikiLeaks possessed emails from Clinton campaign chairman John Podesta’s account was a deduction made as a result of his years of investigative journalism.

The author of 20 books, in 2011, Corsi published “Where’s the Birth Certificate: The Case that Barack Obama is not Eligible to be President” contending that any identity “documentation” Obama or his surrogates might have released was fraudulent and that indications were that Obama was born in Kenya and not Hawaii, as he claims. Prior to the 2008 election, Corsi visited Kenya and, upon his attempt to depart the country, was arrested and reportedly physically mistreated by Kenyan police, necessitating a hospitalization in London once he was released from Kenya.

Corsi himself has said that he believes the “abuse” he received at the hands of Mueller and his prosecutors is in part a result of his work on the Obama “birth certificate” issue.

Beginning in August 2011, four months after a “long-form” birth certificate image was uploaded to the White House website which Obama claimed to be his own, a criminal investigation was launched under the authority of the Maricopa County Sheriff’s Office (MCSO), then headed by Sheriff Joseph Arpaio. At three different press conferences over the 5+-year probe, lead investigator and former detective Mike Zullo said that the long-form image is nothing more than a “computer-generated forgery” and that Obama’s purported Selective Service registration form is also fraudulent.

Gallups has provided a platform on “Freedom Friday” for Zullo to provide updates on the investigation, including after its conclusion in December 2016, the most recent of which was November 30. Prior to its conclusion, Gallups was deputized by Arpaio solely in regard to the birth certificate investigation.

Neither Congress nor the media nor the FBI opened its own investigation into Zullo’s claims. In regard to the birth certificate image, in the final presser on December 15, 2016, Zullo revealed that two forensic analysts, Forlab of Italy and ReedWrite of Hawaii, concurred in formal reports that the long-form birth certificate image cannot possibly have been derived from a real, paper document. A source document for the forgery was also obtained, Zullo explained along with a video depicting it, belonging to a woman born in Hawaii the same month as Obama purports to have been, August 1961.

In his interview with Martinez, Gallups reminded the listeners that Corsi played an early and significant role in the Obama long-form birth certificate investigation Zullo conducted. “Donald Trump’s now the president, and I’m telling you:  Sheriff Arpaio knows this, Mike Zullo knows this; I’ve been screaming it; Jerome Corsi knows it — a lot of what Mueller is doing and what the Deep State’s doing and their desire to get Trump out of office goes to the foundation of the fake birth certificate,” Gallups said.

It was Trump who first publicly demanded that the White House release Obama’s more detailed, or “long-form” birth certificate, to provide more information than that which appeared on a “short-form” Certification of Live Birth released by an unconfirmed party in June 2008.

Three months after Trump began making public appearances to demand the release of proof that Obama qualified for the presidency, the White House released what it said was a scan of a certified copy of Obama’s original birth certificate from the Hawaii Department of Health (HDOH).

Gallups reminded listeners that the White House it originally said that the short-form document was the only “birth certificate” available to Obama and to all Hawaiians per HDOH policy.

Gallups called the birth certificate forgery “the greatest crime ever committed against this nation.”

Gallups’s “breaking news” to Martinez was that “I know the players; they are huge.  There is a very, very important person with an internationally-recognized name…who had an audience with an extremely important person in Washington, DC…these two major players got together…sat down with this major Washington, DC player who has direct access to all the people that need to know, and they sat down together for 30 minutes more and exposed everything to this DC player and the DC player said, ‘This will be dealt with; we are waiting for the specific timing.'”

Gallups said that “five federal crimes” have been identified in connection with the birth certificate forgery.

“Because we’ve been talking about that in the media, the Deep State knows this, too, which is why they’re just ramping up everything against Corsi and against Donald Trump…” Gallups said.

Martinez responded that “the Democrats” “fought hard” to win back control of the House of Representatives in the 2018 midterm elections.  He then asked Gallups why Republicans are not challenging those results, some of which may have been the result of “ballot harvesting” in California.

On Monday, December 10, NBC News reported that Corsi filed a civil lawsuit against Mueller, the FBI, CIA and NSA for allegedly “having placed Corsi under illegal surveillance ‘at the direction of Mueller and his partisan Democrat, leftist, and ethically and legally conflicted prosecutorial staff.'”

The suit also claims that Mueller leaked grand jury information, according to CNN.  In its report, CNN calls Corsi’s work on Obama’s origins “racially-charged and inaccurate theory that President Obama wasn’t born in the U.S.”

Corsi was offered a plea agreement to admit to one count of perjury which he rejected based on his contention that he will not lie in order to appease Mueller and his team.

In an interview with NBC, Corsi said that “when the birth certificate issue came around, there were a few instances where Donald Trump called me to ask me questions and discuss it with me.”