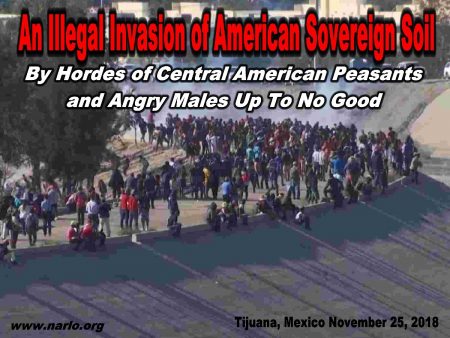 (Dec. 9, 2018) — Hospitals are closing across the country due to the burden of illegal immigration, college students find that summer jobs have dried up due to illegal immigration, and wages across the board are depressed by the overwhelming influx of cheap and illegal labor.  — Elton Gallegly, former U. S. Congressman, California

There should not be a question of legal or illegal immigration. People came and immigrated to this country from the time of the Indians. No one’s illegal.  They should just be able to come. — Linda Ronstadt, contemporary American singer

The contrast between the above two quotes represents the wide gap in opinions about illegal immigration.  Gallegly, a former California U.S. Congressman, is much closer to the issue than is Linda Ronstadt, a naïve singer who may sing well but she’s ten cards short of a full deck when it comes to math.  Her “let ’em all in” philosophy ignores the fact that there are roughly seven billion souls on planet earth.  Of those seven billion, over five billion are desperately poor.

The estimated annual cost to the American taxpayer for each and every existing illegal alien in America is about $6,000 per year.  If we “let all 5 Billion poor people in” as Linda suggests, the cost would be in the neighborhood of $30,000,000,000,000 (that’s trillion, folks) per year, on a current Gross Domestic Product (GDP) of around $19,000,000,000,000.  (And you think our current national debt is bad.)  But then of course we would all be living like sardines in a can (or rats in a cage) ruled by a brutal dictator, in a state of constant fear, chaos and war.  We describe such a scenario in our article entitled “Back To the Future, the Obama Legacy.”

This is what it would be like in a Linda Rondstadt world of “Let ‘Em All In“:

“Food would be in short supply, wholesale starvation would be ubiquitous and inflation would be so rampant from government over-spending and borrowing it would lead to something worse than hyper-inflation….. anarchy.  It could take over $1,000,000 to buy a loaf of bread.  Banks would go under, forcing Americans into the barter system.  Gold would shoot up to over $25,000 an ounce, but it couldn’t be found, as most gold would have been bought up years ago and hoarded.  Crime would accelerate to unbelievable levels as hungry bellies resorted to stealing just to stay alive.  Murder would be an everyday occurrence as fear, anger, resentment, frustration and jealousy overwhelmed the minds of most Americans, because government-authorized illegal immigration had broken us and destroyed the fabric of our culture.  In the once-great cities of America, dead bodies would litter the streets because there would be no one to dispose of them.  The stench from decaying bodies and rotting garbage would be unbearable, if not deadly.”

“Heavily-armed, roving gangs would run wild in the streets, day and night, and they would kill, pillage, plunder and rob whoever or whatever they wanted.  The nights would be the worst and nothing short of outright war.  The days would be just slightly better, but going out on the street at any time could bring an end to your life in a fraction of a second.   Police would be nowhere to be found because the danger would be too great and the government would have no money to pay them.”

“The American people would be broke.  The government would be broke and would be forced to trade American soil in exchange for defaulted loans to foreign countries, who by then would have called in the loans.  Much of American land would be exchanged for that debt.  Sovereignty, individual rights and the constitution would have died long ago, as the influx of billions of poor people from foreign lands would have overwhelmed all institutions of government.”

“Health care would be nonexistent in a Linda Ronstadt world as hospitals closed down, doctors left the profession and vital medicines no longer manufactured.  Only the very rich would find sparsely available health care, paid for in gold.”

“Electric power would go off as generating plants shut down.  Factories would be shuttered, unemployment levels could reach 50% or more, and water and sewer services would be unavailable.  Grocery shelves would empty and prices for food would go through the roof.  Disease could rise to raging epidemics.  Transportation would grind to a halt and the price of a horse would skyrocket.  For all intents and purposes Americans could be driven back to the Dark Ages.”

“But worse, one of the other super-powers would find the timing ripe to conquer America and they’d win.”

Do you have any idea of what “swamping a life boat” means?  It means a drowning death for the occupants of the lifeboat and death to those swamping the lifeboat.  That’s what will happen in a Linda Ronstadt “Let ‘Em All In” scenario.

NOW DO YOU GET IT?

But let’s get back to reality.  Estimates for the cost of current illegal immigration range from around $100 Billion to over $150 Billion, depending on who is providing the estimate.  The cost may very well be around $135 Billion.  If the actual cost is $135 Billion, then in 2018 your family of four legal Americans just contributed $1,636 in taxes to that cost, or $409 for every man, woman and child in America.

Why are you paying those taxes to reward foreigners who blatantly disobey our laws?  Because your government won’t adequately secure American borders.   Because of irreconcilable political differences, neither will your government neutralize the magnets that draw illegal aliens here in the first place.  This in no way is a criticism of the gallant Border Patrol and Immigration and Customs Enforcement (ICE) agents that do what they can to bring order to border crossings and illegal-alien crime out of the chaos caused by arcane immigration laws and the insane interpretation of the 14th Amendment.

Ladies and gentlemen, our anger over the recent images being displayed on our television screens showing the arrogance of those illegal aliens in the Central American caravans grows by the day.  Somehow, these illegal aliens have gotten it in their minds that America owes them asylum, or a job, or America’s generous welfare benefits, or an education, or health care, or food, clothing, housing and transportation.  If you are seeking asylum, or a job, you don’t throw rocks and bottles at Border Patrol agents or cross our international borders illegally.

Yes, we know that some of them are just poor peasants seeking a better and more secure life.   But the desire to come to America for whatever reason does not give them an absolute, irrevocable right to illegally cross our borders or encumber legal American citizens for their care.  We have enough poor people of our own.

Most illegal immigration consists of uneducated, low-skilled poor people and angry young males, with very little desire to learn our language and assimilate into the American culture.  They bring diseases with them, they ignore our laws, they hide in the shadows and come here only for the jobs, or the welfare …. or to commit crimes against legal Americans.  Illegal immigration makes a mockery out of legal immigration.

We know the government isn’t going to fix the problem, and any legislative fix would be a useless compromise that would leave the problem unresolved.  Consequently, we channeled our anger into action and created an emotionally powerful 1.5 minute Youtube video entitled: “Stopping Illegal Immigration by Forcing Self-Deportation” describing what unfettered illegal immigration is doing to America’s neighborhoods, the economy, jobs and our culture.  The video points to our revised “Save the USA” website, which further describes the damage being done and putting forth a plan of action to force illegal aliens to self-deport.  If enough Americans will engage in this plan of action, we could start to see self-deportation begin in several months and illegal border crossings reduced significantly.  Our soldiers could come home and our borders could resume facilitating growing cross-border commerce.

If the government will not act, it is then up to the people to bring stability to the rule of law in America by forcing illegal aliens to self-deport back to their own countries where they will feel more at home and not as if they are unwanted strangers in a foreign land.

How many murders of legal Americans by illegal aliens will it take for people to get angry and then take action?  How many low-skilled jobs have to be lost and how low do wages have to get due to illegal immigration before people take the law into their own hands because government isn’t protecting the American people from all enemies, foreign or domestic?  How large does the cost of illegal immigration have to get before legal Americans say enough is enough?   How many Democrat socialist policies, policies that have bankrupted most cities and states run by Democrats, will it take before the people realize that Democrats are selling America down the river for the sake of raw political power alone and vote accordingly?

What this author doesn’t get is why there isn’t a national outrage over these socialist Democrat issues, including illegal immigration, to the point that they force government to act against those policies, or the people act against them en masse?

We encourage the reader to watch the video or log onto the “Save the USA” website and join with us in a simple, peaceful, lawful plan to force illegal aliens to self-deport.  Legal discouragement is the best deterrent of all.  If the American people don’t act, we will all be living in the Linda Ronstadt world described above, and maybe sooner than you think.