CLAIMS NOT TO KNOW WHAT “COLLUSION” MEANS 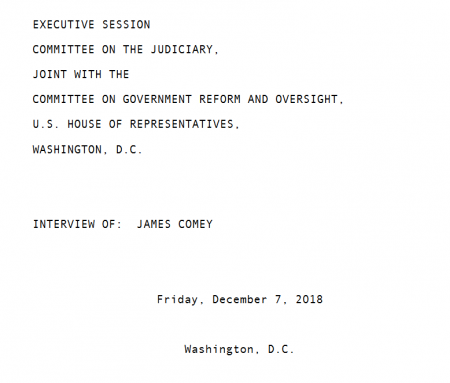 (Dec. 8, 2018) — Late Saturday afternoon, the House Oversight & Government Reform Committee released a 235-page transcript from testimony provided by former FBI Director James B. Comey to that committee as well as the House Judiciary Committee on Friday.

When Oversight Committee Chairman Trey Gowdy suggested, while asking a question invoking text messages exchanged between former FBI officials Lisa Page and Peter Strzok indicating foreboding that Donald Trump could become president, that “the appearance of bias” is “as insidious as actual bias,” Comey claimed to not know “exactly what the word ‘insidious’ means” (p. 21).  However, he responded to Gowdy’s question with, “The appearance of bias is as important…It’s as important as actual bias because the faith and confidence of the American people that your work is done in an independent, fair, and competent way matters enormously. And so a reasonable appearance of bias can corrupt that faith in your work as much as actual bias can.”

On page 23, Comey referred to the FBI’s having opened “counterintelligence operations” rather than a single investigation, as Gowdy characterized it.  Comey also denied that the FBI was investigating the “Trump campaign or Donald Trump himself.”

When asked if he read the “initiation document,” Comey responded, “I don’t think so. I don’t remember ever seeing it” (p. 24).

On the next page, Comey responded that he is not aware “for sure” the process by which the FBI opens “counterintelligence investigations.”

An FBI lawyer, Bessee, said that Comey could not divulge the names of the individuals “involved” in the counterintelligence investigation (p. 26).

On page 28, Comey claimed not to know “what ‘collusion’ means.”  “It’s a term I haven’t heard in my career in the Justice Department,” Comey answered Gowdy’s question.

On page 29, Gowdy stated with certainty that Strzok “drafted the initiation documents” for the FBI’s counterintelligence operation.