SITTING IN THE DARK, OR LIGHT? 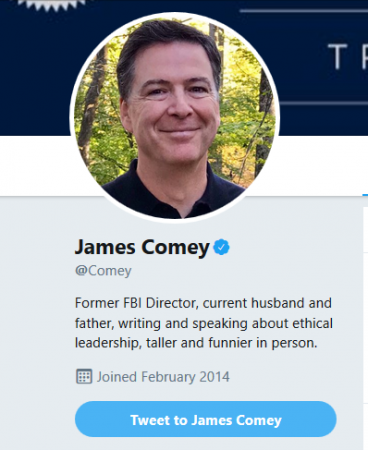 (Dec. 6, 2018) — Tucker Carlson of “Tucker Carlson Tonight” announced Thursday evening that former FBI Director James Comey will testify to the House Judiciary Committee Friday to answer questions about the agency’s launch of a counterintelligence investigation into the Trump campaign and why it requested four FISA warrants on then-Trump adviser Carter Page.

As reluctantly agreed to by Comey and his attorneys on Sunday, Comey will testify behind closed doors.  The committee has agreed to release a transcript within 24 hours and permit Comey to publicly discuss his questioning. Comey had said last week that he wished to testify publicly so that the American people could judge his credibility for themselves and also to prevent “leaks” which he accused Republicans on the committee of having committed in other instances.

In a court filing last week, Comey’s attorneys asked to quash the congressional subpoena he received on November 21 based on the claim that it “harassed the witness” and “exceeded a proper legislative purpose,” among other reasons.  However, on Sunday Comey’s representatives withdrew the request amid an agreement with the committee to accede to their request for private testimony.

Comey’s appearance was to occur on Monday but was postponed due to the passing of former President George H.W. Bush on November 30 and his memorial services this week.

On Wednesday, John Solomon of “The Hill” reported that his sources say that Comey’s name appears on a number of undisclosed emails in which FBI and DOJ officials reportedly discussed their doubts as to the accuracy of the Russia “dossier” compiled by former British intelligence agent Christopher Steele as opposition research for the DNC and Hillary Clinton campaign on Donald Trump.  The dossier was used to obtain the warrants on Page but not disclosed to the FISA court as a political product.

Republicans on a number of congressional committees have been urging Trump to declassify 20+ pages redacted from documents submitted to the FISA court.  In July, the documentation, which was heavily redacted, was released to government watchdog Judicial Watch after it filed a lawsuit to obtain them.

Page has not been charged with a crime nor even been interviewed by the DOJ or FBI, he told Fox News’s Sean Hannity in October.  However, Page had business dealings with Russia which may have been used to create the narrative that the Trump campaign was “colluding” with the Kremlin to marginalize Hillary Clinton’s chances of winning the 2016 presidential election.

Since Trump took office in January 2017, more than a dozen senior FBI and DOJ officials have been fired, demoted or have resigned.  A report released this past June by the DOJ’s inspector general indicated that political bias was a factor in the conduct of two former FBI officials:  Lisa Page, counsel to the FBI deputy director not related to Carter Page; and Peter Strzok, a 22-year FBI veteran formerly second-in-command of the agency’s counterintelligence unit.

Comey was fired on May 9, 2017 at the recommendation of Deputy Director Rod Rosenstein, who then assumed oversight of the work of Special Counsel Robert Mueller, who he hired a week later.  On November 7, Trump appointed Attorney General Jeff Sessions’s chief of staff, Matthew Whitaker, to replace Sessions temporarily following Sessions’s requested resignation, after which Whitaker said he would not recuse himself from overseeing Mueller’s probe, as Sessions had.

For the last 19 months, Mueller and his team of prosecutors have been investigating Russian influence on the 2016 election and the allegations of “collusion” between the Trump campaign and Russia.

Former Trump campaign adviser George Papadopoulos, who is now serving a two-week prison sentence after accepting a “guilty” plea with the FBI this past fall, has said that the Russia “collusion” narrative was concocted in order to “frame” members of the Trump campaign, including himself, setting the stage for a Clinton win.

In a tweet December 2, Comey characterized his upcoming testimony as “sitting in the dark.”