“SUBORNATION OF PERJURY” AMONG ACCUSATIONS 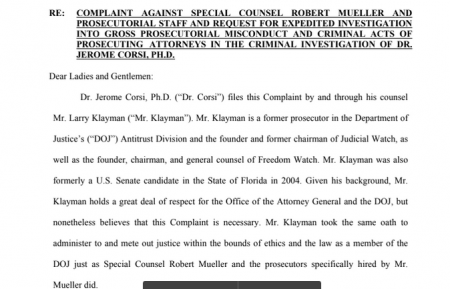 (Dec. 3, 2018) — Dr. Jerome Corsi has released on his website a criminal complaint filed by former US Justice Department prosecutor Larry Klayman, reportedly working with another attorney, David Gray, with Acting Attorney General Michael Whitaker and a number of other government officials asking that Special Counsel Robert Mueller and the members of his prosecutorial team in the “Russia” investigation be “investigated and removed” as well as barred from the future practice of law for “gross prosecutorial misconduct and criminal acts” committed against Dr. Jerome Corsi, Ph.D.

The complaint, numbering 78 pages, is addressed to Whitaker; Justice Department Inspector General Michael Horowitz; the Washington, DC Bar Disciplinary Counsel; and the U.S. attorney for the District of Columbia, among others.

Some observers have opined from the beginning of Mueller’s appointment that he had disqualifying conflicts of interest based on his professional acquaintances with former FBI Director James Comey, who Trump fired on May 9, 2017; and with current Deputy Attorney General Rod Rosenstein, who hired Mueller.

Later, President Trump revealed that Mueller was appointed Special Counsel the day after Mueller interviewed to possibly replace Comey and that Mueller had had undisclosed business dealings with the Trump Organization in years past.

Both Trump and Corsi have called the Mueller “Russia collusion” investigation “a witch hunt.”

Under the first-page subheading “Introduction,” Klayman wrote that “This Complaint concerns the politically-motivated criminal investigation of Dr. Corsi, an investigative journalist, whose activities are protected by the First Amendment to the U.S. Constitution. Dr. Corsi has been threatened with immediate indictment by Mueller’s prosecutorial staff unless he testifies falsely against Roger Stone and/or President Donald Trump and his presidential campaign, among other false testimony.”

On page 8, Klayman accuses Special Counsel media contact Peter Carr of having leaked “grand jury and other confidential information” to members of the press.

Klayman followed the statement with a number of examples which he believes support that media leaks supplied fuel for a number of media reports in various publications.

On page 14, Klayman accuses Mueller and his team of “conspiracy to suborn perjury” in violation of 18 U.S. Code § 1622, which reads, “Whoever procures another to commit any perjury is guilty of subornation of perjury, and shall be fined under this title or imprisoned not more than five years, or both.” 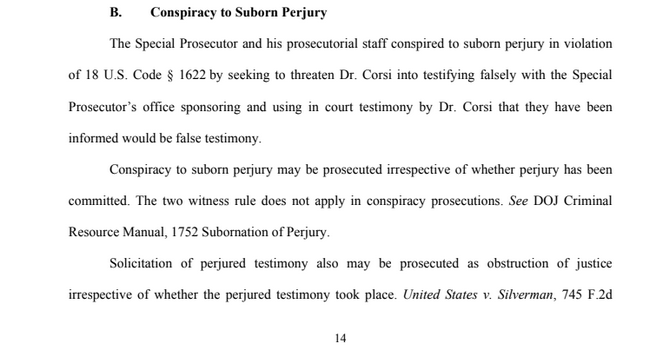