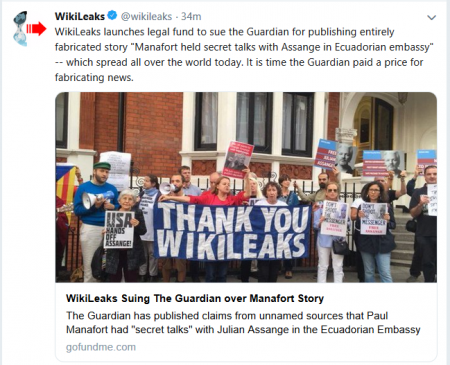 (Nov. 27, 2018) — In response to an article published by The Guardian on Tuesday morning, the government-transparency website WikiLeaks tweeted on Tuesday afternoon that it has launched a GoFundMe campaign to raise money to sue the newspaper.

The Guardian article claimed that former Trump campaign manager Paul Manafort had met with WikiLeaks founder Julian Assange on three different occasions, the most recent of which allegedly occurred just prior to the organization’s release of successive batches of emails from the DNC and Hillary Clinton campaign in 2016.

The emails are considered by many, including Clinton herself, to have significantly damaged her chances of becoming U.S. president.

Soon after The Guardian released its story, WikiLeaks denied it. “Remember this day when the Guardian permitted a serial fabricator to totally destroy the paper’s reputation. @WikiLeaks is willing to bet the Guardian a million dollars and its editor’s head that Manafort never met Assange,” the organization tweeted.

These claims are completely false and the story has been fabricated.

The Embassy’s visitor logs – maintained by Ecuador – show no such visits, since they did not occur.

This is not the first time that the Guardian, and in particular its writer Luke Harding, have fabricated a story about Assange.