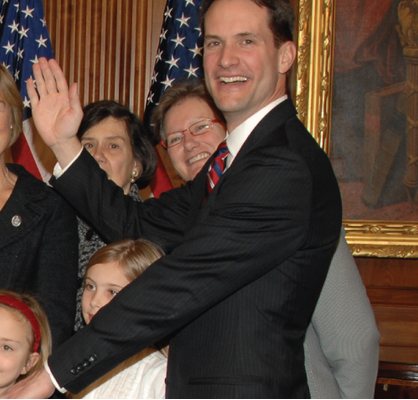 (Nov. 25, 2018) — On this morning’s “Sunday Morning Futures,” Rep. Jim Himes (D-CT4) accused the Department of Homeland Security, President Trump and substitute host Trish Regan of “lying” about there being “500 felons” in the thousands-strong “caravan” of Central-American travelers originating primarily from Honduras last month.

Regan, who was in for regular host Maria Bartiromo, asked Himes what he believes the solution should be to the “migrants” currently lodged in Tijuana, Mexico who are demanding entry into the United States.

The exchange began cordially but quickly escalated to an adversarial one after Himes said that Trump is perpetuating falsehoods about the composition of the caravan. Himes later admitted, however, to not knowing who is in the caravan.

Himes claimed that asylum-seekers do not commit violent crimes against Americans and that Trump lied when he claimed that “Middle-Easterners” are present within the caravan.

Last month, Judicial Watch reported that individuals from a host of foreign countries were reportedly recently discovered and expelled from Guatemala by the administration of President Jimmy Morales.  “In a startling revelation, Guatemala’s president announced in the country’s largest newspaper that nearly 100 ISIS terrorists have been apprehended in the impoverished Central American nation,” JW wrote in an October 18 press release.  “Why should Americans care about this? A caravan of Central American migrants is making its way north. Let’s not forget that Guatemala is one of the countries that bombarded the U.S. with illegal immigrant minors under Barack Obama’s open border free-for-all. They came in droves from Honduras, El Salvador and Guatemala through the Mexican border and for years Uncle Sam rolled out the welcome mat offering housing, food, medical treatment and a free education.”

Guatemala has long been known as a major smuggling corridor for foreigners from African and Asian countries making their way into the U.S. Last year Guatemala’s largest paper, Prensa Libra, published an in-depth piece on the inner workings of an international human smuggling network that moves migrants from Afghanistan, Pakistan, India, Nepal and Bangladesh to the U.S. Individuals are sent to Dubai in the United Arab Emirates then flown to Brazil before heading to Colombia. Once in South America, the migrants are transported to Panama before moving on to Costa Rica then a central point on Guatemala. One Spanish news report refers to Guatemala as a human smuggling paradise because it’s so easy to get fake passports. A few years ago, the head of Guatemala’s passport division got arrested for selling fake passports to a group of Colombians, according to a government announcement.

Several days after making the claim about “Middle-Easterners” being in the caravan, Trump admitted there is “no proof” of it while maintaining that “there could very well be.”

On Monday, DHS officials said during a call with reporters that “More than 500 criminals are traveling with the migrant caravan that’s massed on the other side of a San Diego border crossing, homeland security officials said Monday afternoon,” according to Fox News.

Regan asked Himes if he disbelieves U.S. “intelligence,” which she said has embedded certain individuals within the caravan to act similar to “CIA” agents in gathering information.  “No, we don’t have CIA agents running around inside the caravan,” Himes responded.

“I didn’t say that,” Regan replied, then asked Himes if he had any “intelligence-gathering about who is actually in the group.”

“Not much,” Himes responded. “Not enough to be able to say with any certainty that there are 500 felons in that group…”

On November 20, Regan’s assertion was reported by NBC News, which wrote, “The Department of Homeland Security is gathering intelligence from paid undercover informants inside the migrant caravan that is now reaching the California-Mexico border as well as monitoring the text messages of migrants, according to two DHS officials.”

The same day, The Washington Examiner reported the same, relying on NBC’s reportage.

During a second segment, Himes said that congressional Democrats are in favor of “border security” and that the House Democrat Caucus gained seats in typically politically “purple” or “red” areas of the country in the midterm elections held earlier this month.

Himes said he believes that the government should “crack down” on employers who hire illegal aliens to “get at the underlying causes” of illegal immigration.

Prior to her interview with Himes, Regan interviewed Rep. Mike Johnson (R-LA4), who said that many Democrats recognize the need for border security.

Regan asked Himes if he “agrees” that Rep. Nancy Pelosi, a former Speaker of the House, should again receive the gavel when the newly-elected Democrat majority takes control of the House in January.  In his response, Himes said that Pelosi had raised significant amounts of money to spur Democratic candidates to victories and therefore proved herself a leader despite her 78 years and an “aging” party leadership.

One of the original 13 colonies, Connecticut has five congressional districts, all held by Democrats.  Its legislature is Democrat-controlled, with Republicans having lost seats in both the state Senate and House in the midterm elections. Prior to November 6, the senate was tied between Republicans and Democrats for the first time since 1896.

The state’s two senators are Richard Blumenthal and Chris Murphy, the latter of whom was just re-elected to another six-year term. Its 2018 gubernatorial choice was Ned Lamont, who State Senate Majority Leader Len Fasano has called “a socialist.”

In late July, the left-leaning “Daily Beast” described Connecticut as “collapsing” under a debt of $74 billion.

This post was updated at 12:36 p.m. EST with the report from Judicial Watch.