Papadopoulos Tells The Australian He Plans to Run for Congress

“PROBABLY AS AN INDEPENDENT” 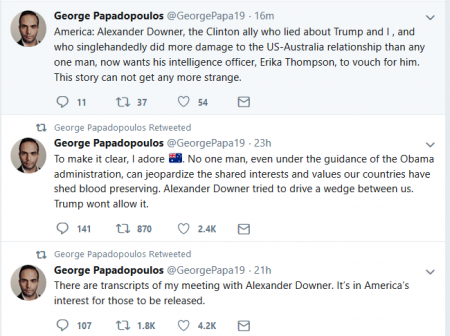 (Nov. 19, 2018) — On Monday afternoon, former Trump campaign aide George Papadopoulos tweeted his appreciation to The Australian for an interview it conducted with him about his experiences during the 2016 campaign cycle, his impending prison sentence and plans for the future.

In the weeks leading up to the 2018 midterm elections, Papadopoulos became vocal about what he believes was a conspiracy among certain elements of the U.S. intelligence community and a number of foreign-government agents to ensure that Donald Trump would not win the 2016 presidential election.

According to the 31-year-old former energy consultant, Australia is one of those countries.

As The Australian reported, in the spring of 2016, the nation’s then-ambassador to the UK, Alexander Downer, met with Papadopoulos at the Kensington Wine Rooms in London and later reported through official channels to the FBI that Papadopoulos told him that the Russians possessed potentially damaging information on Hillary Clinton.

That meeting followed another between Papadopoulos and a Maltese professor, Joseph Mifsud, whose London-based attorney now says was working for the FBI when he met with Papadopoulos in Rome.  There, Mifsud told Papadopoulos that “the Russians” had “dirt” on Hillary Clinton.

He said he believes Downer “was sent there to give me two messages” concerning disparaging remarks Trump and Papadopoulos had allegedly made about then-UK Prime Minister David Cameron and to “discuss energy-related issues in the Mediterranean.”

Papadopoulos has previously said that an aide to Downer Erika Thompson, facilitated the meeting.

In April, Downer interviewed with The Australian and reportedly said that Papadopoulos “clearly knew that the Russians did have material on Hillary Clinton.”  Papadopoulos has said in recent interviews that he does not recall having discussed “emails” with Downer.

Other members of the Trump campaign have alleged that they, too, were approached by strangers appearing to want to lend their expertise to the Trump effort but who in retrospect they believe were attempting to extract or plant information with them.

In late October, Papadopoulos claimed that “there was a spy in the Trump campaign,” and possibly more than one.

It is as yet unproven that any “Russians” possess Clinton’s missing emails or any other potentially negative information about her.  However, it is generally believed that the meeting between Papadopoulos and Downer served as the catalyst for the opening of the FBI’s counterintelligence probe into the Trump campaign, an investigation now being overseen by Special Counsel Robert Mueller.

According to Papadopoulos on November 14, Mifsud is now seeking an audience with a U.S. Senate committee through his attorney, Stephen Roh of London.

In a tweet as this article went to press, Papdopoulos claimed that Downer “lied about Trump and I,” although he did not specify to whom.

Papadopoulos has told radio host Dan Bongino and “Hannity” host Sean Hannity that although he pleaded “guilty” to lying to the FBI last year, he was “framed in many ways” and would reconsider his plea. Papadopoulos is scheduled to report to federal prison on November 27.

The Australian erroneously reported Papadopoulos’s sentence as “10 days.”  His sentence consists of 14 days in a federal prison, a $9,500 fine, and 200 hours of community service.

Papadopoulos has stressed that whatever Downer’s intent and that which transpired later, he believes the U.S. and Australia can remain firm geopolitical allies.

Asked about his future plans, Papadopoulos said he and his wife, who are settling in Los Angeles, are avoiding politics at present but that after completion of “a couple of projects,” he plans to become a congressional candidate from Orange County.

When asked with which political party he plans to affiliate, he responded, “I will either be running as a Republican or as an Independent because I definitely wanted my situation not to be partisan or to be viewed through a partisan lens, and unfortunately I have been pulled and tugged between both the Republican and the Democratic Party, and I probably would be running as an Independent just to showcase how important for me that the country comes first and not partisan politics.”

Papadopoulos Tells The Australian He Plans to Run for Congress added on Monday, November 19, 2018