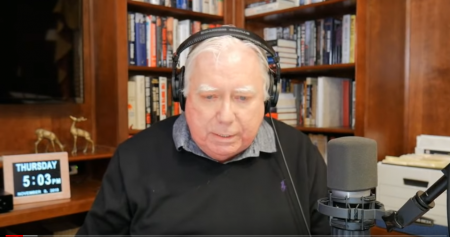 Corsi has testified twice to a federal grand jury empaneled by Special Counsel Robert Mueller, The Daily Caller reported Friday.  For the past 18 months, Mueller has been investigating whether or not anyone in the Trump campaign “colluded” with Russian operatives to tip the election in the former businessman’s favor.

More recently, public reports say that Corsi and longtime friend and political strategist Roger Stone have come under scrutiny regarding whether or not they had knowledge of the content, timing or source(s) of emails damaging to the Clinton campaign released by the open-government organization WikiLeaks in the months leading up to the 2016 presidential election.

Stone has denied any direct communication with WikiLeaks founder Julian Assange, a claim Assange has echoed.  Stone testified to the House Intelligence Committee over a year ago, and some of his associates have been questioned by Mueller’s team of prosecutors.

The U.S. “intelligence community” reportedly believes that Assange received the emails, taken from DNC servers and then-Clinton campaign manager John Podesta’s email account, from Russian operatives. Assange has claimed his source was not a “state party” nor Russians.  “We assess with high confidence that the GRU used the Guccifer 2.0 persona , DCLeaks.com, and WikiLeaks to release US victim data obtained in cyber operations publicly and in exclusives to media outlets,” a January 2017 report reads (pp. 12-13).

The former longtime WND writer and author of “Where’s the Birth Certificate:  The Case that Barack Obama is not Eligible to be President,” several months ago launched a new endeavor, “Corsi Nation,” and recently produced an audio-book, “Dr. Corsi Investigates: Why the Democratic Party Has Gone Communist.”

On Thursday, Corsi hosted his show, titled “Decoding the Future,” and stated early on that he would not host the show the following day due to circumstances requiring that he “be with his attorney all day.”

During the opening minutes of the web broadcast, Corsi said that having become a focus of Mueller’s probe has been extremely stressful for him.

Corsi objected to the label of “conspiracy theorist” assigned to him by the mainstream media, citing the 20 books to his credit since 2004.

On Twitter and on his Thursday show, Corsi indicated that he is establishing a legal defense fund and that he considers the broadcast to be “historic.” 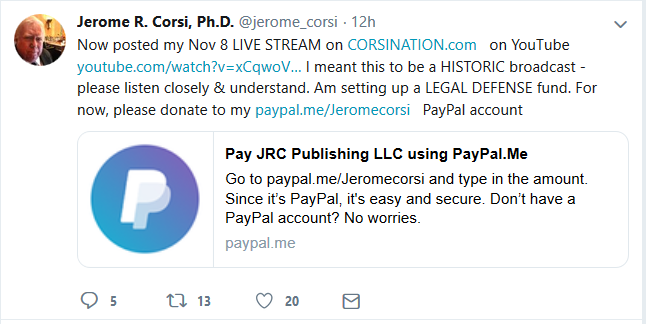 Corsi revealed that he is personally acquainted with President Trump but that he has not spoken with him since 2011.

At the 14:00 minute mark, he said he continues to follow and support the “Q” movement, referring to online persona “Q,” who has been purported by some to be an inside Trump administration source supportive of the Trump agenda.  Earlier this year, Corsi was a frequent commentator on the “Patriots Soapbox” 24/7 live YouTube broadcast.

Corsi quoted Bible verses frequently during Thursday’s broadcast while recalling key moments from his past when he was writing his controversial books, stating that he believes he will again become a flash-point in the media.

Contrary to what he said Infowars founder Alex Jones reportedly has said, Corsi stated that he has not “suffered a stroke” and is in good health at age 72. He said, however, that he has experienced a great deal of “mental pressure” without invoking the Mueller probe.

He also recounted when he was arrested in Nairobi, Kenya in 2008 after conducting research into Obama’s origins.  Shortly after the 2008 election, he said, he was suffering from spinal stenosis and underwent surgery. “…When I got arrested in Kenya, I wanted to give a press conference on “The Obama Nation“; I was looking at that point for Obama’s birth certificate information, and they came with an army.  They showed up at the press conference at the hotel in Nairobi, and I look around me and there’s military with automatic weapons.  There must have been 50 of them.”

Corsi said he was “put in a military vehicle” and arrested by Kenya’s “immigration office.”  He said that after seeing himself on “international TV,” he was allowed to leave the country for London.

Quoting from the Book of Jeremiah, he said that he has “faced many trials” and that “ultimately, in every one of those situations, I’ve prevailed and got out of.”

He then quoted Pontius Pilate, who allowed Jesus to be crucified, as having asked him, “What is truth?”  “I’ll be able to say more about this later,” Corsi said without further specifics.

The broadcast is here:  https://www.youtube.com/watch?v=xCqwoV_vTwc