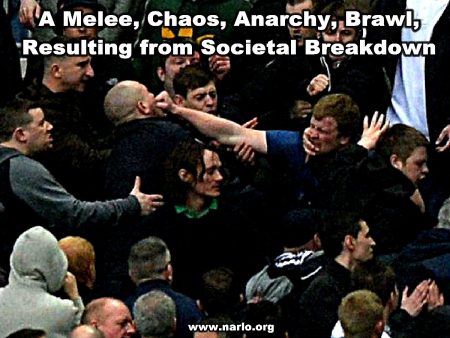 (Nov. 4, 2018) — Much violence is in the news these days.  From school shootings, to cop killings, to rape, to burglary, to kidnappings, to terrorist attacks, to waves of illegal immigrants crossing our borders, to attempted assassinations of politicians by guns or bombs, violence continues to grow in America.  Some of the violence is isolated to single individuals, like the recent pipe-bomb perpetrator targeting high-profile Democrat politicians, or the anti-Semite shooter in Pittsburgh.

But more violence and threats of violence can also be the domain of large constituency groups, much like what the Socialist Democrats are exhibiting now.  These 2018 mob attacks on Republican politicians by Democrat acolytes are not accidents.  The attacks are not only preplanned; they are encouraged by many Democrats, like Maxine Waters.  Some of those people in the attack mobs are receiving payments from wealthy agitators.

The forces of evil have pitted us against each other, and our growing differences have no other outlet than violence.  Civil debate is breaking down and yelling and vitriol are taking its place.

Socialists, environmentalists, ethnic groups white, black and brown, gays and lesbians, transgenders, the homeless, men and women, illegal immigrants and rich and poor are all in conflict with each other and their conflicts are growing each day, egged on by government and special interest groups, or individuals like Democrat billionaires George Soros and Tom Steyer.

Now violence has always been with us since the dawn of time.  But in a 24-hour news cycle, violence is brought to us in living color on our TV screens almost every waking hour, day and night, fiction and non-fiction.  Turn on your local TV newscast and you will see what we mean.  The local news consists of murders, rapes, burglaries, fights, gang wars, arson, building fires, car crashes and other mayhem.

TV programs, movies and other forms of entertainment perpetuate the violence.  We won’t admit it, but the news media and “Hollyweird” are the carriers of the violence disease.  Is it any wonder that our society has become more violent?

Also, the move towards socialism in America is on a fast track, perpetrated by radical ideologically-driven Progressive politicians and mobs that mostly live in large cities.  Violent Antifa, Black Lives Matter and White Supremacy groups and meaningless protests are loading fuel on the fire.

If it hasn’t become apparent to the masses yet, there is no common ground between freedom and socialism.  The outcome of this crash of ideologies can only end in violence.

Violence is the opposite of peace and civility.  It has its sources and its reasons.  The reasons are usually hate, irreconcilable conflicts and differences between man-to-man, or group-to-group.  But rising government tyranny can also trigger violence.

Local, state and federal government politicians mistakenly believe that if they pass law after law against the citizens of America, especially if those laws fall outside of the expected freedoms most Americans believe are their unalienable rights, they are somehow immune from some of those Americans striking back with violence.  Much of today’s societal violence is the direct result of two opposing ideologies that are diametrically opposed to each other.  They are, in fact, oil and water.    Freedom cannot coexist with socialism!

Incidents of violence will continue to grow.  First, it will be isolated events like the man near Denver, mad at local authorities over zoning issues, outfitted his large bulldozer with steel plates and small holes to see through, brought it to the planning department’s office building and leveled the building before the police finally killed him, or he committed suicide.

Then there is the case of a man somewhere in Arizona who couldn’t trim his own hedges himself and had to have it done by the contracted landscaper of the gated community he lived in, at his cost, of course.  He sued the Homeowners Association and lost.  His next action was violence.  He took a shotgun to the community meeting and killed two of the commissioners.  He will be in jail for the rest of his life.

In another incident, a disgruntled contractor in Kirkwood, MO, just south of St. Louis, with a history of acrimony against civic leaders, stormed City Hall during a council meeting, yelled “Shoot the mayor!” and opened fire, killing two police officers and three city officials before law enforcement fatally shot him.  It seems that the man was frequently at odds with the zoning commission.  He ran a contracting business from his home and was often cited for storing materials that didn’t meet code.

Violence between rural landowner and government is also growing.  The standoff between heavily-armed Bureau of Land Management (BLM) agents and the Cliven Bundy family at their Nevada ranch in April of 2014 is one example.  Only by the grace of God was a civilian bloodbath averted.

The BLM-Bundy standoff led to the armed occupation of the Malheur nature preserve in Oregon almost two years later.  The armed occupation of the Preserve by the Bundy clan was triggered by the unjustified incarceration of fellow ranchers Dwight and Steve Hammond by the BLM.  That occupation led to the unnecessary and violent murder of Lavoy Finicum and the wounding of other occupiers by state or federal authorities on a lonely Oregon county road.  Yes, government agents do shoot innocent Americans.

America is broke and deep in debt with no means of repayment of that debt.  Inexplicably and negligently, government keeps adding trillions more to that debt.  Gee! Why should we be angry?

Illegal-alien peasants are crossing over the border in record numbers in direct defiance of our laws.  These invaders are carrying diseases America eradicated years ago. The cost of this illegal invasion has exceeded $134 Billion annually.  But think about it.  If an unwanted guest invaded your home and the unwanted guest demanded that you pay for the unwanted guest’s room, board, education and health care, you could very easily be motivated to expel that invader with violence.  These illegal invaders from Central America have invaded our HOME and have demanded we pay for them.  They should be expelled!

Millions of Americans find it necessary to live in a perpetual “high” on drugs and alcohol, resulting in tens of thousands of deaths each year by overdose.  Death by drug or alcohol overdose is a violent act.

The turmoil in our families and communities is so great that kids are growing up in a state of daily anxiety, slowing their emotional development and rendering some of them unstable and unfit for life as an adult.  Our culture and our families are fractured and breaking down, all a recipe for more violence.  South Chicago is a glaring example.

ObamaCare turned a working health-care system into a nightmare of chaos, confusion and rising costs, brought to you by Socialist Democrats.  Now those same Democrats, in their incessant drive towards socialism, want to replace ObamaCare with an insanely costly Medicare program for every American that would send America into third-world status and rampant inflation.  It would also destroy health care in America forever.  This one drastic change alone could lead to violence.

Just yesterday we received an e-mail from a landowner in Santa Rosa County, California asking what he can do to fight a proposed ordinance by county commissioners.  The proposed ordinance was designed to “clean up” the rural areas of the county where the cost of the cleanup was to be borne by the landowner.  The landowner sounded frustrated and angry.  Frustration and anger can lead to violence.

As law after law is added to the already voluminous law books, law-breaking will become the norm.  Violence will then follow the law-breaking as government exerts more police power to enforce the growing number of insane and unenforceable laws.   As government tyranny and enforcement rises and politicians and bureaucrats, at every level of government, continue to squeeze Americans with new and more draconian laws, violence will be the final arbiter, that is, unless WE THE FREE PEOPLE OF AMERICA rise up en masse and peaceably take control of our government and bring it back to the principles of constitutional law that the Founding Fathers created for us, at great cost.

What we have now is a government run amok by national and international special interests and politicians only too eager to pander to those special interests for the money and political influence they will need to win the next election.  On the other side we have an electorate that is oblivious to the corruption that goes on at every level of government and doesn’t seem to care one whit.  That same electorate has no concept of cost versus benefit when it comes to government welfare and give-away programs.  To make matters worse, we have a news media that has become the arm of the Democrat Party, aiding and abetting the slide towards socialism.

A growing number of citizens who are frustrated with the unreasonable and in some cases treasonable actions of government will resort to violence to relieve their pent-up anger and frustration and to regain their freedom.

WE DO NOT CONDONE VIOLENCE AND HAVE WORKED DILIGENTLY TOWARDS PEACEFUL RESOLUTIONS OF AMERICA’S PROBLEMS.  But we have been largely ignored.  Nevertheless, if we are pushed once, we will politely ask why.  If we are pushed twice, as government is doing to the free people of America, we will have no choice but to meet aggression with aggression.  Many Americans wear the same stripes that we do and will push back when pushed.  Pushing back can lead to violence.

Pundits on both sides say we must tone down the rhetoric, but they don’t offer solutions to the vexing problems that divide us.  Serious, unresolved problems lead to violence.

We close with this admonition.  America is not Europe, or Russia, or China.  Millions of Americans have tasted real freedom, and they aren’t about to let it slip through their fingers without a fight or give it up to a bunch of pampered city folk who can’t seem to make it on their own without government help.

This is not hyperbole or a far-off Nostradamus prediction.  This is fact.  Ignore it at your own peril.  Most of you will.

Next Tuesday or Wednesday Americans will know which way the political wind is blowing.  It almost wholly depends on which party turns out in greater numbers.  If America goes left in large numbers, our prediction will most certainly come true in time.

Ron Ewart is a nationally known author and speaker on freedom and property rights issues and author of his weekly column, “In Defense of Rural America.”  Ron is the president of the National Association of Rural Landowners (NARLO) (www.narlo.org), a non-profit corporation headquartered in Washington State, acting as an advocate and consultant for urban and rural landowners.  An affiliated NARLO website is “Only The Righteous Hear The Truth” (http://www.otrht.com).  Ron can be reached for comment HERE.

Violence Can Be The Manifestation Of Societal Turmoil added on Sunday, November 4, 2018

One Response to "Violence Can Be The Manifestation Of Societal Turmoil"