IS THE MEDIA DOING ITS DUE DILIGENCE? 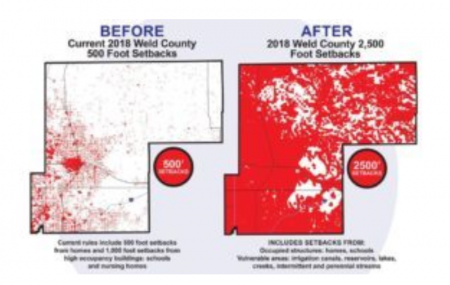 (Nov. 2, 2018) — Al Gore’s endorsement of the anti-fracking ballot initiative in Colorado makes it clear that this is a “leave it in the ground” measure. It is not really about health and safety, homes and hospitals, despite being pitched that way. This is climate activism at work.

Proposition 112 is aimed at killing oil and gas production where no one lives. The Colorado Oil and Gas Commission has even produced a detailed map that makes this farce clear, but the Colorado press has simply ignored this glaringly inconvenient fact. I explain this here and here.

One only has to dig a bit to find that major climate activist groups are actively supporting Prop 112. These include the Sierra Club, NRDC, Gore’s own Climate Reality Project, the Center for Earth Ethics, Greenpeace, Rainforest Action Network, and 350.org.

Colorado has a history of this sort of climate madness. They were the first state to mandate the use of renewable energy via a “renewable portfolio standard.” More recently they became the first state to opt for replacing working coal fired power plants with wind farms.

Some of this activism may be due to the fact that Colorado us home to two major national laboratories that are both climate activists. These are DOE’s National Renewable Energy Laboratory and NSF’s National Center for Atmospheric Research. As a result there are thousands of federally funded climate activists in the state.

Now Colorado may pioneer the surreptitious banning of fracking, by ostensibly protecting that which needs no new protection. These so-calked “vulnerable areas” include every creek and intermittent stream in the state (that is not on federal land). These are already protected by law and there is certainly no reason to keep fracking rigs a half mile away from them, as Prop 112 requires.

Now we see the climate activists going after natural gas as well as coal. The gas industry should have seen this coming, but they were too busy bashing coal and touting gas as the preferred alternative. The climate activists despise all fossil fuels, not just coal.

Recent polls indicate that Prop 112’s fate is too close to call. If it fails to pass, but gets a hefty percentage, there will still be enormous pressure on the state to act against fracking. On the other hand, even if it passes the state legislature gets the final word.