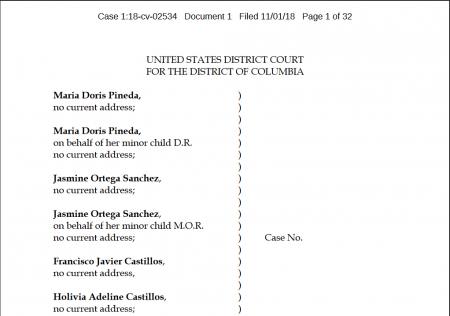 (Nov. 1, 2018) — Just before her show opened at 11:00 p.m. EDT on Thursday, Fox News’s Shannon Bream tweeted that a number of migrants in the “caravan” traveling north from Honduras filed a federal lawsuit against President Trump for his stated intention to disallow them and others from crossing the Mexico-U.S. border at will purportedly to seek asylum.

The eight plaintiffs are noted to have “no known address” and have named Trump, Immigration and Customs Enforcement (ICE), the Department of Homeland Security (DHS), U.S. Customs and Border Protection (CBP), and U.S. Citizenship and Immigration Services (USCIS) as defendants, among others.

Another defendant is “Thomas Homan, in his official capacity as Acting Director of ICE,” although Homan retired in August and is now a Fox News contributor on immigration issues.

The lawsuit, filed in the U.S. District Court for the District of Washington, DC, claims that Trump’s stated intention to prevent the “migrants” from entering the U.S. unlawfully is “shockingly unconstitutional.”  The complaint expresses the belief on the part of the plaintiffs of their “lawful right to seek asylum in the United States” and that their children must be housed not in tents at the border, as Trump has proposed, but rather, quoting from the 1997 Flores court settlement, “in facilities run by licensed programs that are ‘safe and sanitary and are consistent with [Defendants’] concern for the particular vulnerability of minors,” (emphasis theirs) including “adequate temperature control and ventilation.”

At 4:15 p.m. EDT on Thursday, Trump gave an address from the Roosevelt Room at the White House on his administration’s policies toward illegals attempting to breach U.S. borders without authorization in large numbers, which is that they will not be permitted to enter the country.

Trump attributed the increase in illegals planning to cross from Mexico to the Southwest U.S. in a series of “caravans” to the improved American economy where jobs are plentiful and wages rising.

“These are tough people in many cases…but they’ve overrun the Mexican police and they’ve overrun and hurt badly Mexican soldiers,” Trump said of the thousands of travelers mainly from Guatemala, Honduras and El Salvador.  “…these illegal caravans will not be allowed into the United States, and they should turn back now.”

He also announced that the practice of “catch and release” will cease, meaning that illegals given a court date after entering the country will not be released into the community while awaiting their hearing.

During his remarks, Trump stated that it appears that the multiple caravans which continue to form in Central America with the intent of entering the U.S. are highly organized.

The 32-page filing dated November 1, 2018 is signed by four attorneys:  two from Georgia; one from Florida; and another from Washington, DC.  The grammar used throughout the suit is imperfect and refers to Trump as “our president” despite having been filed on behalf of non-Americans from Central America attempting to flee “a well-documented human rights crisis.”