(Oct. 18, 2018) — If nothing else, Democrat operatives are good at following the orders of their betters.  They have followed California Rep. Mad Max Waters’ command to go after Republicans “wherever you find them” and “I have no sympathy for these people that are in this administration who know it’s wrong for what they’re doing on so many fronts. They tend to not want to confront this president or even leave, but they know what they’re doing is wrong. I want to tell you, these members of his cabinet who remain and try to defend him, they won’t be able to go to a restaurant, they won’t be able to stop at a gas station, they’re [sic] not going to be able to shop at a department store.”

The Democrat Socialists are now surrounding senators on their way to their offices and blocking elevators from closing, while they scream, spit and yell at them.  Democrat Sen. Tim Kaine encourages Democrats to “fight in the streets” (see Hannity video below), while during the same program Sen. Lindsey Graham tells of being cornered by a hostile Democrat group and spat upon.  Graham told Hannity that there was “saliva all over my jacket” (see 35-min. mark of video) and that for his first time of all of his years in office he has to have police protection.

This week, the GOP campaign manager for Nevada’s AG position—Kristen Davidson—was grabbed and assaulted by a Democrat operative.  Fox News reports:  “A Democratic operative for American Bridge 21st Century, a group founded by David Brock and funded by liberal billionaire George Soros, was arrested Tuesday after the female campaign manager for Nevada GOP gubernatorial nominee Adam Laxalt accused the operative of grabbing and yanking her arm and refusing to let go.

“Kristin Davison and other officials for the Nevada attorney general’s campaign said the “battery” left her “terrified and traumatized” — and with bruises on her neck and arms.  “Politics is a little bit aggressive these days, but this is just insane. I’ve never seen anything like it,” Davison, 31, told Fox News on Wednesday.

“According to the Laxalt campaign and local law enforcement, Wilfred Michael Stark III, 50, was arrested by the Las Vegas City Marshals on Tuesday evening and remains in custody in the Las Vegas city jail.” 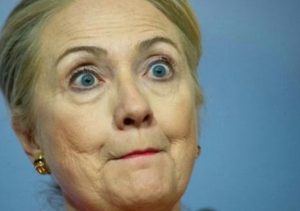 On Friday, October 12, Minnesota Republican candidate for the House Shane Mekeland was “sucker-punched” by a Democrat who disagreed with his message and Mekeland suffered a concussion.  Meanwhile, Hillary Clinton has recently told the country that none of this will end until the Democrats are “back in power.”  Even losing presidential candidate Clinton is now threatening the country with violence unless it accedes to her and the Democrat Socialists’ will when she said:  “You cannot be civil with a political party that wants to destroy what you stand for, what you care about,” she said. “That’s why I believe, if we are fortunate enough to win back the House and/or the Senate, that’s when civility can start again.”  And…when has her party ever been civil to Republicans?  Never.  Clinton and, increasingly, the DSAP (Democrat Socialist of America Party) are showing their true intentions—those of destroying the USA whether they win or not.  Marxists always use violence to overthrow countries they want to conquer, pilfer and control.  And, when they’re successful in doing so, each of these countries ends up like Venezuela.  Communism was designed to build a movement on multiple lies so that the leaders could steal everything the citizens have.  Communism has been and will always be a criminal enterprise…always.  And now, with the leadership of our DOJ, CIA, NSA etc. appearing to be firmly in that camp, it all comes down to the 2018 midterm elections.

Are there still enough citizens in the United States willing to fight back?  We already know that California—and possibly other Democrat-run states—are allowing non-citizens to vote.  We must overcome that to survive.

The Democrat Socialists will continue to work at separating one faction of people from another to keep them fighting with each another, so they will not see the Marxist leaders’ pilfering of our country until it’s too late and their well-paid National Police Force is in place…as Obama wanted.  Remember?

There’s only one non-violent way for us to win…that’s via an insurmountable vote for Republicans.  Vote for your own and your family’s survival on November 6!  And…then pray hard.

“When you go out to battle against your enemies and see horses and chariots and people more numerous than you, do not be afraid of them; for the LORD your God, who brought you up from the land of Egypt, is with you”—Deuteronomy 20:1

I Suffered A Concussion After Punch To The Face: Republican:  https://patch.com/minnesota/maplegrove/republican-candidate-said-he-was-punched-face-bar-sheriff

Hillary Clinton Says Democrats Can’t Be Civil Until They’re Back in Power:  https://reason.com/blog/2018/10/11/hillary-clinton-says-democrats-cant-be-c