SHOULD MAKING PUBLIC, UNSUBSTANTIATED ACCUSATIONS AGAINST ANOTHER BE A CRIME?

(Oct. 2, 2018) — “Good evening, ladies and gentlemen, and thank you for tuning into ‘The Pulse of the Nation,’ your one stop for the truth. We know your time is valuable and it warms the cockles of our heart that you choose us instead of our competitors, many of which include fake news. My mother, who will be 100 years old next June, bless her heart, is addicted to the purveyors of our enemy but, because she’s so brainwashed, she no longer can tell the enemy from us good guys. She’s got it all backwards, just like Pocahontas and the rest of the jackals, no disrespect to the four-legged vacuum cleaners of dead flesh. Hello, my name is Roving, as in Roving Reporter (RR), and I’ll be conducting street interviews here on our corner, under the awning, across the street from the railroad depot. Excuse me, sir, Roving here for ‘Pulse’; care to be on TV for a question?”

“Hey, Roving and crew, like them burgers, do you? Name’s Hank, a longtime viewer. Like that Talking Dog but would like to hear more from her owner, the Vietnam Veteran. What’s his story, anyway?”

“I’m sorry but you’ll have to ask him, or I will next time they’re on the show. All I know is that he used to have some pretty bad nightmares that almost ended his life, but that’s about it. Oh, and that he quit the drugs, booze and cigarettes more than 20 years ago and that he’s back on track, or, as he puts it, ‘at least I’m back on one track when I was in the process of derailing completely,’ so I guess he’s doing alright; at least he’s still with us. So, Hank, thanks for being a longtime viewer and the question of the day is, ‘What do you think about Socialism?’”

“Would you care to elaborate just a tad?”

“No can do ‘cause my ride to the big city just pulled in. Bye, Roving and crew.”

“And off he goes. My fault for talking so much; sorry about that. Good time to take a commercial break.”

“Norma, and I’m a poll-taker. We used to go from door to door but with all these illegal immigrants in our country these days it’s just too dangerous, so we’re forced to use the phone, which isn’t the best way to ask people their favorite laundry detergent or what they think of the job Congress is doing.”

“Because people usually don’t lie when eye contact is possible.”

“Now isn’t that interesting? Did you happen to watch the circus unfold on television last week?” 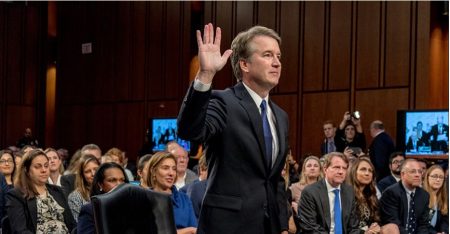 “I take it you’re referring to the Senate Judiciary Committee hearing with that Blasey Ford character. Look, my father is a retired District Attorney and he said that they shouldn’t have listened to a word she said. He said that it reminded him of ‘The Crucible,‘ a play about what happens when unfounded, unsubstantiated and unbelievable accusations are allowed to be articulated in public without any legal repercussions, such as a fine and/or jail.”

“Not those who would wish our country harm. How come they didn’t let Christine Blasey Ford’s past history of left-wing protests come out, along with the rest of her family’s sordid history of hating America?”

“Part of the deal that the committee made with her lawyers, I suppose.”

“The crime here is not the supposed alleged allegations against Brett Kavanaugh; no, the crime is the real manufactured finger-pointing at a Supreme Court nominee for the sole purpose to delay the vote until after the midterm elections, besides the Judiciary Committee going along with the charade.”

“So what’s the verdict?”

“Well, my father says, and I agree with him, that they should charge anybody who makes allegations against anyone without proof, with, at the very least, slander. Maybe they ought to cool their heels in jail, that’s what. And my train is just pulling in. Goodbye, Mr. Roving and crew.”

“Goodbye, Norma, and thanks for talking with us. Let’s do another commercial and do one last interview.”

“Okay, who is next in line? You? Hello, Roving for ‘Pulse.’  What’s your name and what’s your main gripe of the day?”

“Name is Macy and all I got to say is this: HAVE THEY NO SHAME!”

“Everybody, it seems; at least everyone in Washington, for heaven’s sake. I heard what that lady said who was on before me, and I agree with her. How dare they let a bunch of no-account low-life ANTIFA CRYBABIES have the time of day? And this Christine Blasey Ford fake: how come she isn’t rotting her life away in prison? You can’t say stuff against someone else with no proof.”

“You seem to have some rather strong opinions.”

“You ain’t heard nothing yet. Ever wonder how our members of Congress retire as millionaires? Because they take money under the table for favors, that’s how. Let’s say you run a company that hires illegal immigrants (because it’s cheaper). You pay them low wages in cash: no FICA, no unemployment, no nothings, understand? So you ‘donate’ to your congressman’s war chest so you get his or her vote against the wall; that’s how it’s done. It’s all money, and if you run a committee just maybe your war chest grew by a couple of hundreds of thousands, or more, for delaying a vote here and there.”

“Goodbye. And hello, there, care to be interviewed on ‘Pulse?’”

“No, I’m Pam, the person who’s doing the surprise party.”

“The surprise party for your receptionist, Cheryl. It’s her birthday Friday.”

“That’s because she’s part American Indian; Sioux, I think. Anyway, she likes to work. She says it keeps her on her toes. Anyway, I’m supposed to ask you about the theme of the party, as if you would know. Do you?”

“Why would I know? It’s a birthday party; what other theme could there possibly be?”

“Give her some LOTTO tickets.”

“No, that’s a waste of money: the return is very basically one big fat ZERO. Take her out to lunch.”

“Okay; it’s settled: we’ll go to a restaurant where they serve prime rib for lunch. If I was going to say anything, since I’m on the show, I would just say that I’m sick and tired of these Democrats throwing Socialism in our face; I’m just sick of it. If they like Socialism so much, let ‘em all move to Venezuela and be done with it; do us all a favor.”

“Oh, we agree with you there, 100%. There’s a lot of nuts out there besides the nuts who believe in ‘Hands up; don’t shoot’ and this Blasey Ford lie. I’ve a feeling the next time we see her, her nose will have grown another three inches. Thanks for taking the time to vent, Macy. That’ll do it for this episode of ‘Pulse’ and so, on behalf of the crew, I’ll be wishing you all a goodnight: Goodnight.

One Response to "I’m Sorry: In-Your-Face is too Obvious (RR)"