“TRYING TO MAKE IT LEGAL SECRETLY” 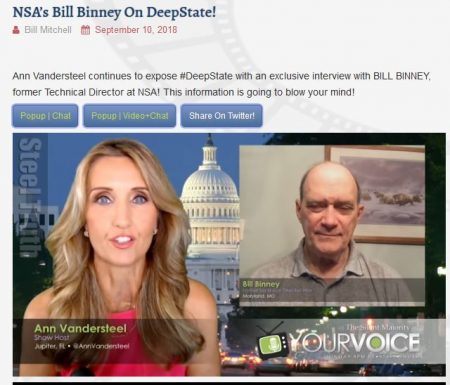 (Sep. 15, 2018) — On September 3, a new internet channel, yourvoiceamerica.tv, launched its first show to report on an organization consisting of former and current intelligence professionals contending that the Trump-Russia “collusion” narrative is false.

The group of 119 intelligence individuals launched a website, Report for the President, which one of its crafters, Robert Caron, spoke about on Your Voice’s first and second shows, the latter occurring on September 10.

There were some obstacles in the website launch, Caron said, due to “attacks,” as is indicated on the home page.

Caron’s host, Ann Vandersteel, asked Caron if he knew the identity of “QAnon,” an online personality who some believe has accurately predicted actions taken by the Trump administration against entrenched government bad actors.

The mainstream media has labeled QAnon, or “Q” for short, a “conspiracy theory.”

Vandersteel’s second guest on September 10 was former NSA program architect Bill Binney, who retired from the agency in 2001 after 30 years of service.

At 23:11, Binney told Vandersteel that the NSA “changed some of the programs I designed and turned it on the U.S. public and are spying on everybody in the country.  And that’s when I had to leave in 2001.”

Binney said he filed complaints about constitutional violations with congressional committees and DOJ and DOD inspectors general.  He said that the surveillance state “is destroying the entire integrity of the foundation of our country.”

Vandersteel was aware that Binney became the subject of an investigation by the George W. Bush administration because of his complaints about the level of government surveillance he had observed.  He reported that then-Vice President Richard Cheney worked with then-NSA Director Michael Hayden and CIA Director George Tenet “writing secret memos to one another, trying to make it legal secretly.”