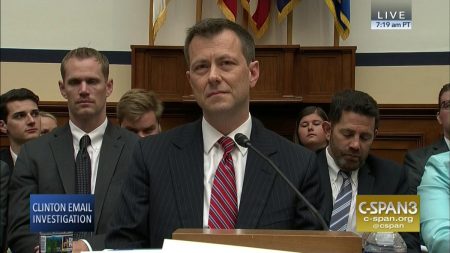 (Sep. 10, 2018) — Before his opening monologue on Monday, Sean Hannity said that new text messages exchanged between former FBI counterintelligence deputy Peter Strzok and former FBI counsel Lisa Page show a coordinated effort to leak negative information to the media, and thereby the public, about the Trump administration “early in 2017.”

According to The Daily Caller on Monday, “Newly released text messages show disgraced FBI official Peter Strzok asked to speak to former FBI lawyer Lisa Page about a ‘media leak strategy’ during a crucial period of the Trump-Russia investigation in 2017.”

The texts were made public Monday by Rep. Mark Meadows, who is a member of the House Judiciary Committee.

A reference by Page indicated that she and Strzok were coordinating their efforts with someone within the Justice Department, according to texts quoted by The Washington Times as received from Meadows.

Meadows sent a letter to Deputy Attorney General Rod Rosenstein, said to be under investigation himself by former U.S. Attorney Joseph DiGenova last week, expressing his concerns that there existed “an apparent systemic culture of leaking” at the FBI and DOJ,” The Daily Caller reported.

The pair reportedly were gleeful after left-leaning outlets published unflattering articles about former Trump foreign-policy adviser Carter Page as a result of their leaking.  For approximately a year, Carter Page was under surveillance by the DOJ and FBI under what appear to be deceptive circumstances in regard to the evidence shown to the FISA court to justify the warrant requests.

Just before 9:30 p.m. EDT, Carter Page appeared on “Hannity” to provide his reaction to the news.  He has never been charged with a crime and denies any wrongdoing.

There is anticipation that Trump may declassify approximately 20 pages of information said to be “exculpatory” concerning allegation that Trump or his campaign aides might have “colluded” with Russia operatives during the 2016 election cycle, which served as the underpinnings of the FBI’s counterintelligence probe of his campaign and the ongoing operation of Special Counsel Robert Mueller.

A group of current and former intelligence officials say that there was no collusion between the Trump campaign and Russia and that they will be releasing documents which will form a “Report for the President.”