“A SERIOUS ABUSE OF POWER” 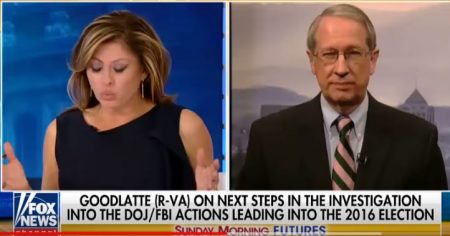 (Sep. 9, 2018) — On this week’s Sunday Morning Futures hosted by Maria Bartiromo, guest and House Judiciary Committee Chairman Bob Goodlatte (R-VA6) said that the documents he and other congressmen have called upon Trump to declassify stemming from the “Russia” investigation contain “stunning” information (1:27).

Goodlatte said that the documents, which were withheld from Congress by the Justice Department for months, show “disparate” treatment on the part of the FBI toward the respective Hillary Clinton and Trump campaign investigations.

Clinton was investigated after it became clear she used a private, unauthorized email server while she served as Barack Obama’s secretary of state and over which she sent classified information.  More than 33,000 emails Clinton sent or received were destroyed, along with an unknown number of devices used by her aides.

To the surprise of many, including longtime FBI agents, then-FBI Director James Comey did not recommend Clinton to the DOJ for possible criminal prosecution after its “Mid-Year Exam” probe concluded with his solo presser on July 5, 2016.

Reportedly on July 31 of that year, the FBI opened its “Russia ‘collusion'” investigation, dubbed “Crossfire Hurricane,” on what has said to be no actionable intelligence collected by the U.S. or its “Five Eyes” partners that anyone in the campaign was working with Russian operatives to tip the election in Trump’s favor.

Goodlatte said that last month, despite the traditional August recess, he and his colleagues in the House of Representatives interviewed key players in the still-ongoing Russia probe, now led by Special Counsel Robert Mueller.

Many Americans believe the Mueller investigation is compromised given that Mueller interviewed for his former position as FBI director the day before he was hired by Deputy Attorney General Rod Rosenstein as Special Counsel.

Rosenstein is now reportedly under investigation by the DOJ’s inspector general for having signed a surveillance warrant for one-time Trump campaign foreign-policy adviser Carter Page which contained unverified information in the form of the now-infamous Russia “dossier.”

Although in the warrant applications, FBI and Justice Department officials claimed Page was acting as an “agent of a foreign power,” namely, Russia, he denies any wrongdoing and has not been charged with a crime.

Goodlatte said that in his view, Trump “should” declassify the 20 pages.  Other sources have said that the documentation could have been released “this weekend” or early next week.

Bartiromo posited to Goodlatte that should Republicans lose the majority in the House in the midterm elections, probes currently being conducted into why the FBI opened an investigation into the Trump campaign and obtained surveillance warrants on Page would likely come to a halt, as Democrats would then control all House committees.

The Judiciary Committee, Intelligence Committee, and others have been conducting investigations into the conduct of the FBI and DOJ during the 2016 campaign for more than a year.  In his interview with Bartiromo, Goodlatte called for a second special counsel to be appointed by the Justice Department.  “It’s my hope that they’ll see the wisdom in doing that,” Goodlatte said.