“I’LL HAVE YOU AS A WITNESS”

(Sep. 7, 2018) — In a letter received Wednesday dated August 29, 2018, NWCX inmate Billy Ray Cooper, Jr., #407119, wrote that he has been placed in protective custody as a result of “a problem with a gang organization” following an incident involving his cellmate and now fears for his life.

Cooper has written to us on a number of previous occasions. In his most recent four-page letter, he wrote that his innocence stemming from an incident for which he was partially blamed involving a cell phone in his cellmate’s possession could have been proven by a medical exam which he was denied.

He said he also requested access to the “PREA” hotline required to be to inmates available by law but was refused.  In Cooper’s case, he was seeking medical attention to prove that something did not occur rather than that it did.

He reported that he was then placed in protective custody (PC), sometimes known as “the hole” and fears that when he is released, he will be physically harmed or worse.  Cooper has designated this reporter “a witness” in the event that any harm should befall him.

On Thursday morning we scanned and sent the four pages of Cooper’s letter, along with a scan of the envelope in which it arrived showing the return address, to Tennessee Department of Correction (TDOC) Communications Director Neysa Taylor but received no response.  We are therefore making the letter public.

[Editor’s Note:  Some readers will find the content of Cooper’s letter disturbing.]

Our email to Taylor reads:

Our reference to “Grenda Ray Harmer” is to an inmate who told us he has been without one of his prescription medications for several months. Harmer, a copious communicator, has been in protective custody at MCCX since August 1, 2017.

A short letter from Harmer received Wednesday confirmed that as of that time, the Antivert had not yet been restored.  We had contacted Taylor about that issue on August 15 and received an acknowledgment from her and assurance that she would contact the “clinical health team” about it.

“…my life is at jeopardy and this place likes to keep us in the hole for a couple of weeks then throw us out to get stabbed or jumped so I want to let someone outside like you know that I have went to protective custody and if after a couple of weeks this place neglects me and sends me out on the compound and I am seriously harmed or hurt I have a witness and if I don’t survive or if I do survive whatever happens I’ll have you as a witness,” Cooper wrote on page 2. 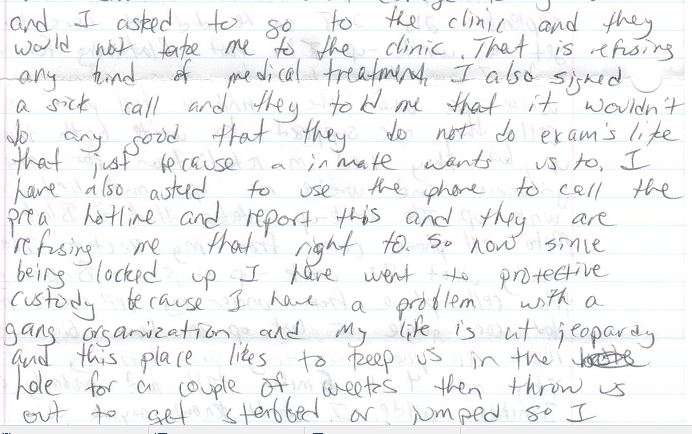 One Response to "Tennessee Inmate Reports Denial of Medical Attention; Fears for His Life"