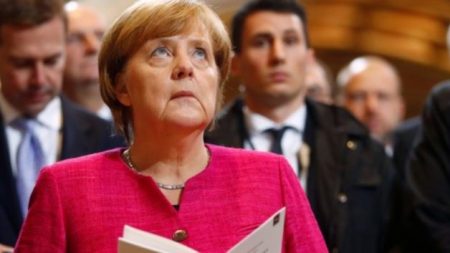 (Aug. 30, 2018) — Germany’s “climate chancellor” Angela Merkel has shocked the climate alarmist world by declining to support tighter Paris Agreement emission targets for the European Union. Her place as the leading EU alarmist was already threatened when Germany admitted that they could not meet their 2020 target and now it is probably gone for good.

France, which does not have the problem of coal fired electricity, will no doubt become the new leader. That its juice comes mostly from green-hated nuclear power apparently does not count against it. At least it is not the even more hated coal, right?

Reducing, or even eliminating, the use of coal is becoming a very big political issue in the EU. Poland gets something like 80% of its juice from coal, so it is leading the resistance. But Germany also depends heavily on coal, despite a massive program to promote wind energy. Last year about 40% of its electricity came from coal, roughly equal to its wind power generation.

The coal producing regions of Germany are starting to make loud noises about protecting their local economies and jobs. Six of the States have banded together to officially lobby for delaying the phase out of coal by 30 years or so, which in political terms is forever. They claim that at least 65,000 direct and indirect jobs hang in the balance.

In addition there is the sudden emergence of a new populist political party — Alternative for Germany (AfG) — which rejects climate alarmism and the Paris Plan. The horrifying (to the left) image of a Trump-like takeover has the liberal Merkel government running scared. Several of the coal states face upcoming elections.

After the election debacle, when Merkel struggled for months to form a new government, she punted the coal problem by forming a Coal Commission to come up with a phase out plan. The coal States have officially petitioned the Coal Commission to give coal a very long term break. It will be interesting to see how all this political maneuvering plays out.

The Paris Agreement includes a review of targets every five years. It is unofficially, but generally, understood that this means the targets will be tightened. Under the alarmist doctrine the present targets are just the first step toward total decarbonization, no matter the cost.

The European Commission has proposed some very tough new targets. “I’m not particularly happy about these new proposals,” Merkel is quoted as saying, adding. “I think we should first stick to the goals we have already set ourselves.”

Merkel, who is a political pragmatist when she has to be, has now thrown some serious cold water on this idea of complete decarbonization. Poland and other coal burning Eastern European countries are behind her. It would be ironic indeed if she now became the Coal Chancellor instead of the Climate Chancellor. That may be too much to hope for, but the coal wars are definitely on in the European Union.

By coincidence the upcoming UN climate summit, which is supposed to finalize the Paris Agreement rule book, will be in Poland. Fireworks (of coal) may be the order of the day.

David Wojick is a journalist and policy analyst. He holds a doctorate in epistemology, specializing in the field of Mathematical Logic and Conceptual Analysis.